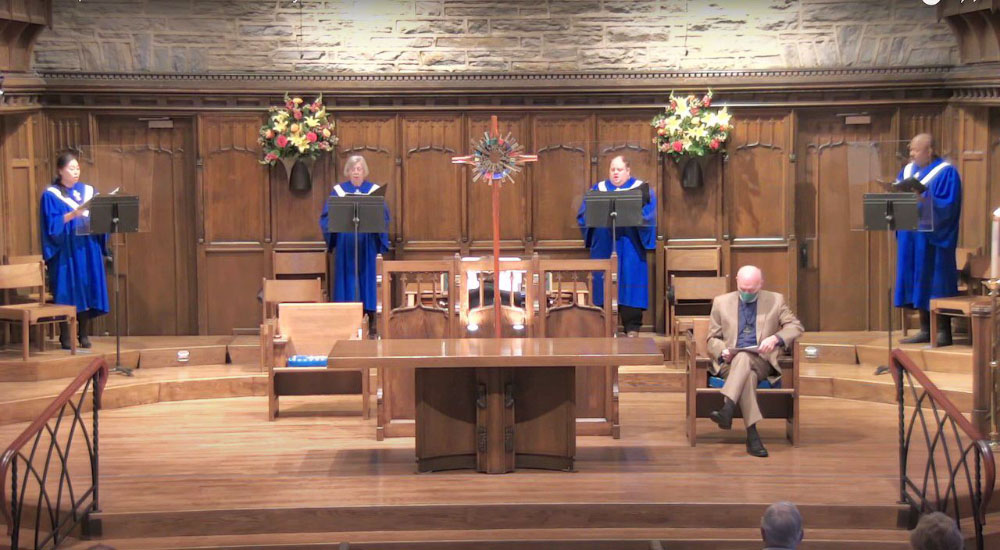 In light of pandemic restrictions, Westminster Presbyterian Church in Wilmington, DC, like many churches, decided to shift from in-person gatherings on Sundays to recorded services, and now with a recent system upgrade that incorporates microphones from DPA, is live streaming its services for congregants at home.

Tony Thurman, Westminster’s director of music joined by members of the church’s property committee initiated talks with Robert Bullington of Front Row Seat Productions, a local AV contractor, to come up with the new sound design. Bullington worked with Gabriel Antonini, business development manager of DPA, to create a plan for upgrading the microphones to meet a goal of live streaming choral, organ and piano music at high quality in balanced stereo.

“To capture the shape of the space at Westminster, we deployed a wide array of solutions from DPA Microphones,” says Bullington. “Included among these is a pair of DPA 4006A omnidirectional microphones with a nose cone accessory above the main aisle, spaced equidistant between the front and back of the church. Paired with the 4006A, the nose cone ensured perfect omnidirectional response across all of the frequencies generated by the massive organ, and provided a 360-degree, true-to-source capture.”

In addition, DPA also hung a pair of its 4011C cardioid microphones on suspension mounts in an ORTF (also referred to as side-other-side) configuration, aimed at the altar, which enhanced the direct sound of whatever event happened to be in this spot. “That, in combination with the 4006As, achieved a fantastic room balance for the remote listeners, ensuring continued engagement throughout the services,” Bullington adds.

For the 30- to 60-person choir situated just below the organ, Bullington installed DPA’s 4015 wide cardioid microphones, which are hung 10- to 12-feet above finish floor (AFF) and about four to six feet above the choir members. The wide polar pattern helps capture the vocalists evenly and consistently and also rejects the organ pipes just above.

“We also flanked the choir in the front with hard left/right 4097 supercardioid choir microphones, which delivered additional focus and clarity to the mix. In addition, we placed a pair of our 4099P CORE instrument microphones in the piano with magnet mounts, which blended with the room to provide an accurate tone and gave us the emotional intimacy required for the stream,” says Bullington.

“To prevent silent holes in the mix, Westminster can keep the room microphones live at all times in slightly different scene levels, to ensure a continued audio stream. This way, the audio team can adjust the mic signals as necessary or preferred,” explains Antonini.

Front Row Seat Productions is also currently experimenting with DPA’s miniature lavalier microphones inside DPA concealer mounts. According to Antonini, this approach will help when the pastors wear robes and other difficult-to-mic garments. When coupled with any third-party wireless system, it also gives them the ability to roam the church during a sermon.