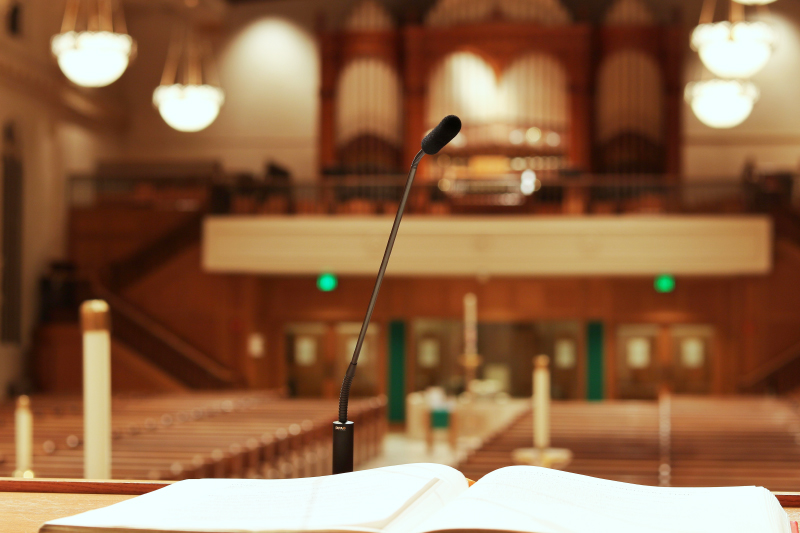 Specifically, the church was seeking improved intelligibility that’s a challenge, given the sanctuary’s domed ceiling and marble walls. The reverberant acoustics also affected the live streams of services, which have become an integral part of the church’s offerings since the start of the pandemic.

“Everything about this space is elegant and high-end,” says Devin Sheets, lead engineer at Alpha Sound. “They’ve gone to great lengths to beautify the space, and we wanted microphones that would complement the aesthetics of the church. The placement was also crucial, as they did not want any microphone stands regularly in the way.”

“In addition to eliminating the need for stands on a regular basis, there was an immediate requirement to solve the intelligibility issues both in the room and for the livestream,” continues Sheets. “The space is very reverberant, so we needed microphones that would sound as natural and clean as possible. This way, we could ensure that we were not compounding the inherent difficulties of the acoustics. There are also several fill speakers nearby, which frustrates the ability to achieve gain from the presenter microphones as they move about the venue.”

“The DPA 4098 gooseneck podium microphone and the DPA 4080 miniature cardioid lavaliers are absolutely astonishing in terms of inherent gain before feedback,” said Sheets. “For the livestream, having dedicated pairs of microphones for the piano, organs and choir really help to clear up the sound when combined with the 4006C ambient mics in the center of the room to pick up audience responses.”

The DPA microphones also work seamlessly with the rest of the equipment Alpha Sound selected. This includes a Dante-enabled network with a Yamaha MRX7-D processor and custom-decorated Nexo line arrays.

Alpha Sound also deployed eight DPA 4097 CORE micro gooseneck microphones. These microphones are hanging from the ceiling above the choir and above the front and rear organs. They’re supported by a pair of DPA 4006C omnidirectional mics for ambience. This setup gave the church the result it sought without sacrificing the visual appeal. The team also installed four DPA 4011F cardioid capsules on MMP-F modular active booms and two 4011C mics on short stands. These mics were included for various special events where the choir changes and instruments were added. Further, two DPA 4099P piano microphones can be left inside the piano when the lid is closed for storage. This eliminates the need to set the mics back up before each use.

“Going this heavy with DPA was a really big step for our company; it means the brand really impressed us,” says Sheets. “We previously used DPA microphones with incredible results. The sonic quality really stuck in our minds. That, combined with the industry name recognition, made it obvious that we should be moving in the direction of DPA for our high-end clientele. The DPA 4098 gooseneck microphone was so impressive in a prior install that we amended the St. Mary’s quote to include this mic.”