DPA Microphones Celebrates The Holidays With “Christmas At DePaul” In Chicago 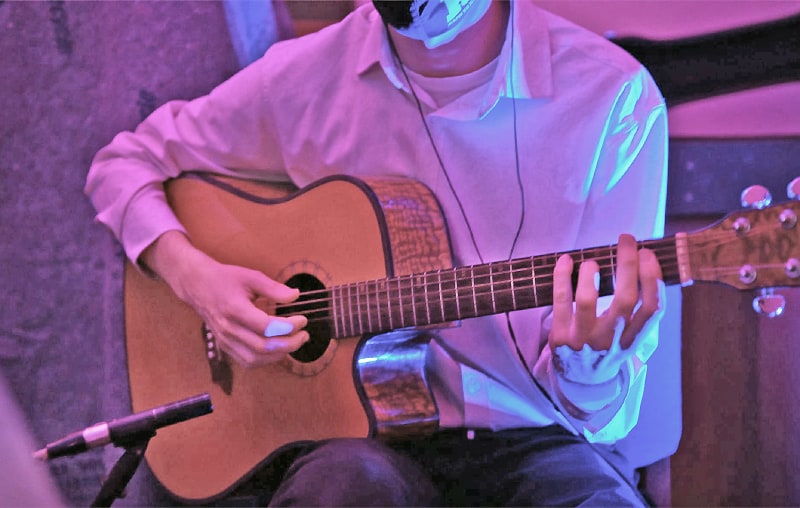 DePaul University in Chicago recently presented its 14th annual “Christmas at DePaul” holiday celebration as a virtual event with an assist from DPA Microphones.

“We had to make the call very early that we were not going to have an in-person event this year,” explains Melissa Grady, Director of Operations & Events at the university. “The show’s artistic director, Tony Peluso, and production manager, Jamie Davis, both alumni of DePaul, worked closely with the university to create a plan that would allow us to pre-record our show. While the show looks different than it has in the past, we were still able to use the exceptional talents of our students, faculty, staff and alumni while following COVID protocols to make Christmas at DePaul a reality this year.”

Dan Steinman, one of the professors in the University Sound Recording Technology Department, was instrumental in helping to make the show a success. Going in, he knew he was going to have to rely on different equipment and setups than previous years for presenting and recording the show.

“Since the performers were recorded in their own separate dorm rooms, I needed microphones that didn’t add any coloration and delivered an exceptionally natural sound,” he says. “As a professional audio engineer, I am very familiar with DPA’s products and have used some of their 4011 mics for live and recorded applications in the past. I knew the DPA mics would be an excellent solution for this unique situation, and we deployed them for all of the strings, flute, and percussion instruments.”

For the production, Steinman employed one DPA 4006 omnidirectional mic on each double bass and tympani, along with a 4011 cardioid mic on each cello and the flute as well as two on the harp, a 2011 twin diaphragm cardioid for acoustic guitar, 4060 miniature omnidirectionals on two violins and one viola, and two of the 4015 wide cardioid mics for percussion.

“The DPA mics worked just as expected,” Steinman notes. “I selected the 4060s for the violins to minimize the accumulation of room tone when the string instruments are layered in multiple passes. I wanted the miniature mics to serve as a contact mic to ensure that the room didn’t get in the way. I chose the 4006 for bass and tympani to achieve a more consistent sound, as well as for the double bass to reduce the potential for tone variation. No matter how often you tell students how to aim their instrument at a microphone, they’re going to move. Also, the development of the sound from the tympani and the double bass is a difficult thing to capture. The tympani with that 4006 sounds like you are in the room next to musician, I could not be happier with the way that recording turned out.”

Part of the difficulty of recording the musicians stemmed from the need to utilize a vacant dormitory, where each musician had their own personal recording space and equipment setup. “The dorm being a large concrete building and not exactly built to be a studio at least gave us one advantage in that every room sounded the same,” explains Steinman. “We had three days of recording instrumentals in the dorms, followed by about eight days of filming with the singers who sang to the pre-recorded music. For the instrumental recordings we used click-tracks along with the live audio mix, which everyone heard through their headphones, in addition to the live conductor providing cues for the musicians via a virtual platform.”

Steinman was in one room and the conductor, Jeff Schweitzer, and arranger, Tom Matta, were each in their own rooms. “We utilized audio talkbacks to ensure smooth communication between takes,” Steinman says. “Aside from each musician having their own unique headphone mix, there was also a sound mix fed to the on-site production manager, Jamie Davis, and the director, Tony Peluso, who was based in Orlando via a high-quality audio stream.”

In addition to the 15-scene “Christmas at DePaul” concert, the recorded production also includes filmed opening and closing remarks from the university president and his wife using 4060 miniature mics as lavaliers. A narration of the Christmas story by two of the university’s theater students, which is weaved throughout the production, was captured by DePaul alum Joe Hampton using 4060s and a DPA 4017 shotgun mic with a wireless pack. “The 4060 and 4017 are very natural sounding in terms of voice capture,” concludes Steinman.