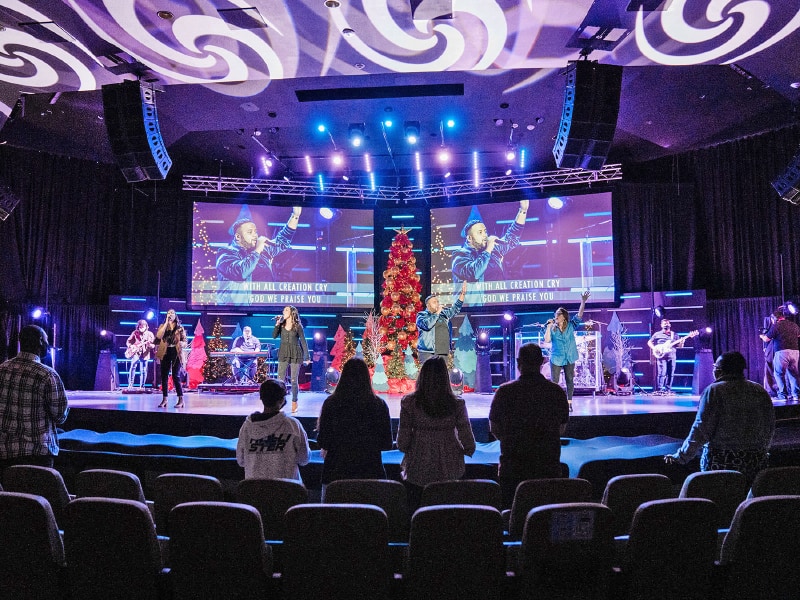 The new installations are all designed and integrated by accommodate various worship-space configurations and types with ease of maintenance and operation, plus the consistency of audio across all three campuses. Christ Fellowship Miami Multisite Production Director Garrett Siljee oversees all AVL-related matters for the church, including campus technology design planning and tech staffing.

“One of my primary responsibilities is crafting the weekend experiences at all of our locations, and sound is a big part of that,” Siljee notes, adding that he was first introduced to L-Acoustics at a product demo staged at South Florida’s Miccosukee Resort & Gaming venue.

Systems for the Palmetto Bay, Doral, and downtown Miami campuses were designed by Summit using L-Acoustics Soundvision modeling software. “The church wanted a high-output sound system in all of its locations, to support its music and high-energy worship style, and Kara was the perfect choice for all of these campuses,” says Summit Director of Projects Deron Yevoli. “Kara can go everywhere this church wants to go because it’s the most flexible PA system available. It’s compact, powerful, and it covers well.”

While the concrete walls at Christ Fellowship Miami’s 500-seat Doral location keep the roar of nearby Miami International Airport at bay, but their reflective surfaces can present an acoustic challenge, with Kara’s directivity helping to keep sound focused on the audience and off of the walls. The Doral system incorporates 12 Kara(i) enclosures flown across two arrays, with eight floor-mounted SB18 subwoofers, plus eight compact 5XT and two short-throw X8 deployed as outfills. All are powered by one LA12X and four LA4X amplified controllers.

The nearby Palmetto Bay campus, which has a more traditional Baptist-type church design, also serves as Christ Fellowship’s broadcast center. Here, 24 Kara(i) are now divided and flown in four hangs, with 12 SB18 subs on the floor, a dozen 5XT as front fills, and eight X12 for delay, all powered by a 12 LA4X.

The downtown Miami location, a former cathedral that is now being renovated, is the largest of the three sites Summit has worked on with Christ Fellowship. Scheduled to open by Christmas 2021, the church’s third campus will feature an L-Acoustics system and comprises 18 Kara II and eight KS21i subs. In addition, eight 5XT provide front fill while six X8 serve as underbalcony fills. The subs are powered by one LA12X, while seven LA4X drive the rest of the loudspeakers.

“Multisite churches tend to want to have cookie-cutter buildings so that the looks and the sound are the same everywhere, but that’s not easy to do in the Miami area, where the rents and the costs to own are so high,” Siljee explains. “Having the L-Acoustics systems sound very differently in each location was my biggest initial concern. Even though none of these spaces are at all similar, Kara provides very consistent sound for all of the rooms we’ve heard them in.”

Yevoli points out that having a common and familiar system in each location makes training and operations easier for staff and volunteers. “They don’t have a lot of production staff, so we’ve encouraged them to standardize on key technology systems across as many locations as possible,” he says. “We believe that you pick a good horse and ride it, which saves time and money in the long run.”

Siljee adds that the church also appreciated the manufacturer’s attention to customer care. “The L-Acoustics team came to work with us to do the final tuning of each system, and the church responds well to that kind of personal interaction,” he explains. “With L-Acoustics, you’re not just buying a PA system; you’re getting the company behind it, too.”