L-Acoustics Delivers An Immersive Soundscape In Upgrade At Texas Church 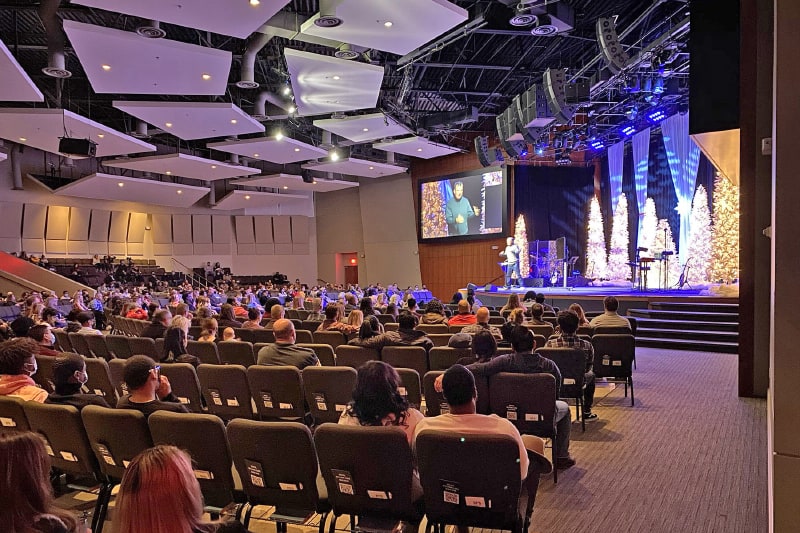 The sanctuary at River Pointe Church’s flagship Richmond campus in Texas has a new sound reinforcement system. It utilizes L-Acoustics L-ISA Immersive Hyperreal Sound technology. It was installed last November by integrator LD Systems (based in Houston) from a design and specification by consultant Idibri (based in Dallas).

Founded 25 years ago by Patrick and Lisa Kelley and four other families, Pastor Kelley continues to lead the church’s 8,000-plus members. He’s continually looking for ways to deepen and strengthen the church’s connection with those attending their services. Ryan Knox, Idibri’s Senior Consultant, recalls that the church wanted to experience a range of sound systems as it chose its next one. This included part of a complete refresh of the main auditorium’s AVL complement.

“They wanted to find a way to make the pastor’s voice seem more approachable, more accessible, through the PA system,” explains Knox. He also designed the church’s previous sound system when it was first installed there 15 years ago. “They were looking for something they described as ‘spacious’ that would cover the large fan-shaped seating area, but also help create a connection to the stage.”

Brian Victor, Technical Operations Director at River Pointe, recalls testing various systems to replace the church’s aging mono PA. This included L-Acoustics Kiva II, which had initially won a “shoot-out” held in the worship space. “What we were looking for was a system that checked all the boxes—clarity, intelligibility, transparency, and coverage—and Kiva II gave us plenty of that,” he says. “But the pastor had always talked about struggling to make a connection between the person on stage and the voice that came out of these big speakers overhead. Making that connection became the real goal.”

“We showed them that an L-ISA configuration would only use one more hang of speakers than the more conventional left-right, left-right four-hang stereo system that they would otherwise have needed,” adds Knox. He worked with L-Acoustics Application Manager, House of Worship Josh Maichele to create the design. “The scale was very similar, and we were able to use the new A Series speakers, so the budget was close to what it would have been with Kiva II. For roughly the same amount of money, L-ISA would take their worship experience to a completely new level.”

The loudspeaker setup for RPC’s new L-ISA configuration has five Scene arrays. This setup comprises left, center, and right hangs of three A15 Focus enclosures atop an A15 Wide. They’re flanked by far left and right hangs of three A10 Focus over an A10 Wide. Additionally there are two horizontally-oriented outfill pairings of one A10 Focus and one A10 Wide. The A Series loudspeakers are collectively powered by six LA4X amplified controllers.

In addition, four KS28 subwoofers are flown between the center and left and right hangs. These are powered by an LA12X. Below, eight compact 5XT are deployed across the stage front as spatialized fills—a unique aspect of this L-ISA design. Furthermore, they’re powered by two recently-introduced AVB Milan-certified LA2Xi amplified controllers, providing four outputs each.

Working with Houston-based LD Systems, the church had everything installed and up and running within weeks. As a result, it met its goal of reopening the Richmond location by the first weekend in December of 2020. Additionally, L-ISA technology helps foster accurate imaging and a sense of envelopment that melds the stage and the seating area into a single immersive space.

“Jacob Meador, the church’s staff audio engineer, quickly adapted to the technology,” says Knox. “The process of mixing and placing audio objects in the sound field was easier than we anticipated because of the strong connection between audible cues in the room and the visual layout of the L-ISA interface. We were also pleasantly surprised with the consistency of mix balance throughout the room. The technology allows for a lot of creativity without having to focus too much on the technical side of mixing.”

Reactions to the New System

River Pointe Church’s pastors are gratified with how L-ISA has removed an invisible barrier between them and their congregation. “The spatial localization is spectacular,” says Victor. “The sound reaches everyone, no matter where they are, and it sounds like it’s coming from wherever the pastor is on the stage. Even with the large IMAG screens, your eye is drawn to the speaker on the stage. We achieved what we wanted to do to the degree that even I didn’t expect.”