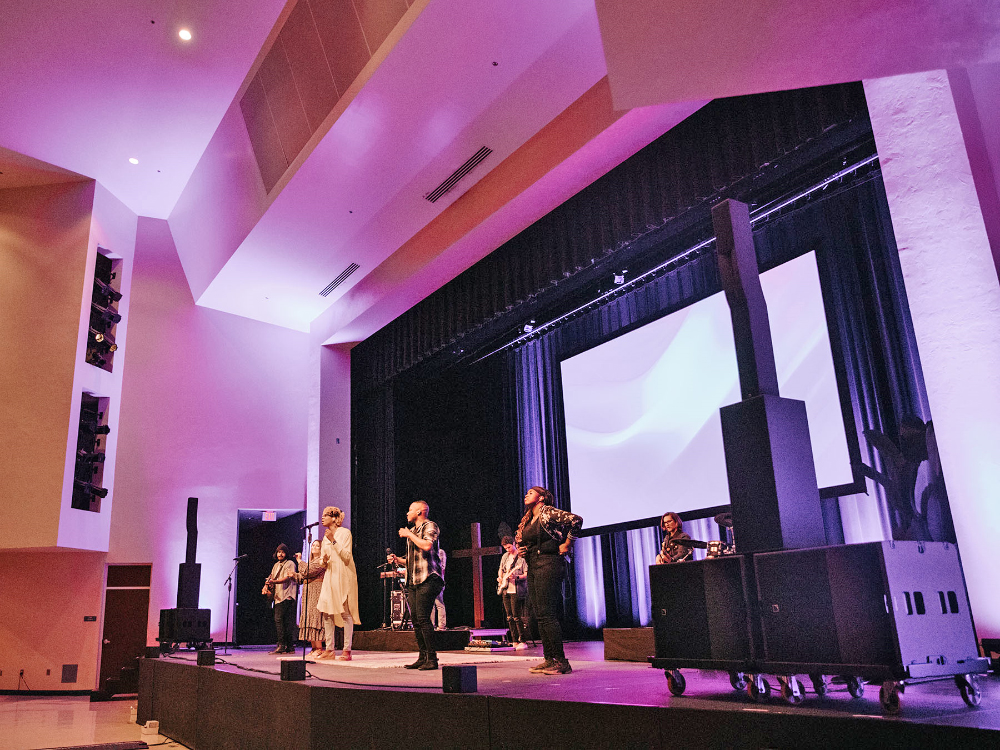 South Florida-based Christ Fellowship, currently comprised of 12 locations throughout the region, recently added a new temporary “portable” church that meets in the 800-seat auditorium of the Suncoast Community High School in Riviera Beach, and it’s been outfitted with L-Acoustics Syva loudspeakers that meet the need for a sound reinforcement system that can be deployed quickly while also providing a tool for eventually helping future temporary locations transition into permanent ones.

“The Syva system is the perfect solution for a portable church location like this because it meets the power concerns of the location and it can be deployed quickly and easily, and stored efficiently, all of which are important for a temporary location like this,” explains Christ Fellowship Audio Director Connor Newcomb, adding that it also leaves more rehearsal time for musicians and vocalists. “And, as importantly, it offers the same sonic quality as the L-Acoustics systems that we use in our other locations, so we have a consistent sonic ‘fingerprint’ everywhere that helps the music appeal to the entire range of our attendance.”

“The KS21 subs were added because the church wanted a higher low-end output for their worship music; plus, they interfaced well in the amplifier scheme alongside the Syva,” says Nick Geiger, Account Executive, Houses of Worship for Diversified, the project’s AV systems integrator. “It also reflects the fact that they wanted consistency in the sound between all of their locations, most of which also have L-Acoustics speakers. It can be set up and taken down quickly and easily, and without the need for specialized infrastructure, because it can run on wall power. Those were very important criteria for the church. Also, it sounds great, which they expected because Christ Fellowship uses a lot of L-Acoustics systems, from the smallest to the largest, in their other locations.”

Christ Fellowship Production Director Danny Dagher describes the church’s worship-music style as modern, and says that L-Acoustics systems allow the church to achieve a remarkable degree of consistency from location to location, despite differences in room sizes and types. “From box to box, whether it’s Syva or Kara or K2, for us as end users, we like that we can depend on the fact that we’ll get a consistent audio experience in every location,” he says. “But that’s been especially true of Syva, which gives us that same experience with just a bit less SPL than the larger PA systems we have. It’s delivering a concert-like experience here at 95 dBA, and we still have 6 dB of headroom, so the punch is there, but so are the clarity and intelligibility.”

Beyond Syva’s clear sonic benefits, the system also offers churches like Christ Fellowship some strategic possibilities. “How well Syva has performed at this new location provides a potential pathway for how the church can open future locations, because Syva offers a way to set up temporary locations that can eventually turn into permanent ones,” Geiger concludes.