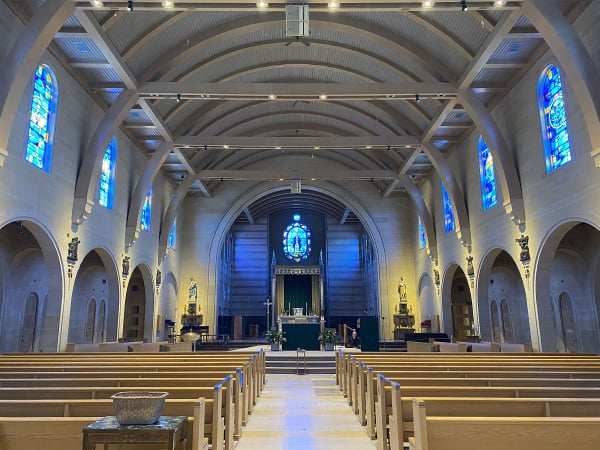 In meeting the challenge of finding space for a growing congregation, St. Mary Catholic Church in Detroit’s Royal Oak suburb this summer relocated its music ministry to the rear balcony of its nave to creating more main floor seating, with Detroit-based Sound Planning Communications (SPC) equipping the space with a new sound reinforcement system primarily composed of L-Acoustics A Series and Syva enclosures.

According to SPC design engineer Jeff Wilshaw, the church had been in need of an audio upgrade for some time. “St. Mary has a classic Catholic church architecture, with stone and marble surfaces and high ceilings, and the loudspeaker system they were previously using was pretty much spraying energy all throughout the room,” he explains. “Nearly a third of the sanctuary was unusable as the space was so reverberant, so we immediately knew that we needed to specify a product with exceptional pattern control to prevent unwanted energy loading the walls.”

Having done several successful install projects with L-Acoustics ARCS enclosures in the past, SPC turned to the line’s next generation, the new A Series. Wilshaw; “The church’s worship space is 35 feet wide by 110 feet long, and every bit of it is highly reflective surfaces, so it quickly became apparent, using Soundvision design software, that the L-Acoustics A10 would be an ideal choice for the main liturgical array system.”

SPC installed a single A10 Focus over an A10 Wide at the front of the room, and a second identical array 40 feet out into the house. The top enclosure allows the system to tightly focus the energy in a 70- by 10-degree dispersion pattern for the farther pews while the lower one gives a 110- by 30-degree pattern for the nearer seating.

“We also used the Panflex dispersion control on the top box of each array, which kept unwanted energy off of the side walls, allowing a better direct sound field,” Wilshaw adds. “By utilizing this methodology, we were also able to keep the sight lines desired by the church. We would have chosen A Series just for the technology, but the added bonus is that the system looks good in the space.”

With St. Mary’s musical ministry, a mix of choirs, individual vocalists, instrumentalists, and percussionists, now performing from the rear choir loft, SPC utilized a Syva-based approach at the back of the nave to deliver musical reinforcement and proper imaging. Two Syva colinear loudspeakers are mounted to the rear wall, just below the far left and right edges of the balcony face, while two Syva Low enclosures are mounted a bit farther out and higher up for extended bandwidth and low frequency contour.

“The Syva system was chosen for its unique ability to throw medium distance with a very narrow vertical pattern control, as well as for the fact that it practically blends into the back wall of the room, especially with the custom RAL coloring that we’ve used for all of the L-Acoustics enclosures,” says David Corbat, SPC sales engineer. “The church’s repertoire varies from classical hymns to more contemporary Christian songs, and Syva provides excellent results for it all, fulfilling the church’s acoustical output and dispersion needs, without detracting from the aesthetic beauty of the space.”

Justin Umbarger, St. Mary’s new director of sacred music, adds, “Because our music is performed from the back choir loft and the spoken word is proclaimed from the front, we now have two systems that can be used separately or in tandem, with each system perfectly tuned for its purpose. The result in power and clarity is just spectacular, especially with the music system, which is able to stand up to our pipe organ. As a musician, I personally love the flexibility of the Syva. Just this weekend alone, between all of our masses, we sang Haydn, Elevation Worship, and traditional hymnody. The Syva system flawlessly supported the needs of each genre. All of it sounded fantastic.”

Two compact 5XT enclosures located up in the loft round out the new audio system, providing balcony reinforcement so that the musicians can hear the pastors and presiders. “We find this system a necessity, especially in responsive reading times, and it ties everything together nicely,” Wilshaw concludes, adding that the entire loudspeaker complement for the church is powered and processed by only two LA4X amplified controllers.”