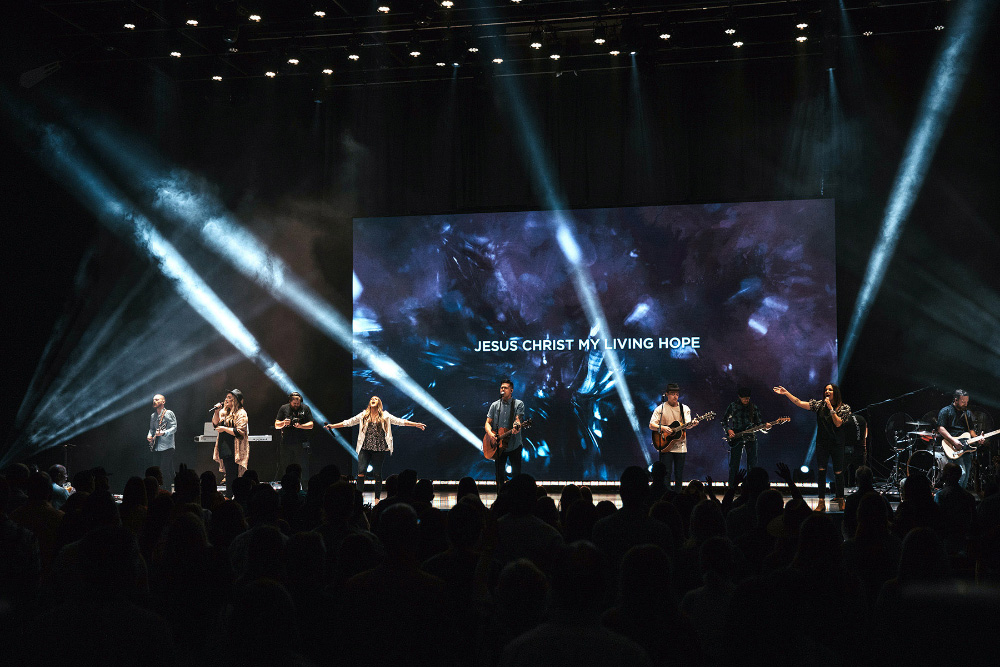 “It’s an extraordinarily musical-sounding PA system,” says Derek Reaves, who was the church’s production manager and house audio engineer when the system was installed last year at Rockharbor. The church had previously been meeting at Rocky Mountain High School since its founding on Easter in 2012, and the new sanctuary opened in mid-December of last year as the first phase of a project that sees two additional buildings are planned for the six-acre site, which is surrounded by a parking lot with room for hundreds of vehicles.

The PA system, which comprises three hangs of nine Kara enclosures each, is designed to complement the new church’s wide, fan-shaped, 1,450-seat auditorium. “The seating is 190 degrees across the front of the stage, so some of the seats are actually behind the front of the stage, which made the room a challenge to design for,” says Reaves, who has since become an installation engineer at Valiant Productions.

A three-hang, left-center-right configuration was initially considered, with three Kara enclosures per hang; however, that would have severely limited the number of seats able to enjoy a stereo image. Instead, says Reaves, the arrays were configured as left-right-left, with two additional ARCS loudspeakers flown as far outfills each delivering the “right” channel, effectively creating a stereo image across the entire seating area. Furthermore, the ARCS were positioned sideways in order to limit their horizontal dispersion and not conflict with the throw of the Kara arrays.

“This configuration of Kara and ARCS is perfect for this environment,” Reaves states. “It preserves the stereo image for as many seats as possible, and we don’t have to do a lot of positional panning since almost every instrument is a stereo pair in the system, including guitar amps. It sounds great.”

In addition, six short-throw X8 coaxials are lined across the lip of the stage as front fills while low end is provided by left and right hangs of SB18 subwoofers, plus six KS28 subs spread out beneath the stage. Eight LA12X and four LA4X amplified controllers power all loudspeakers.

Jacob Apsley, installation and integration manager at Valiant Productions, says the company has deployed L-Acoustics systems for the past five years, and that Kara’s combination of value and sound quality makes it a good fit for a church like Rockharbor, which he says, “basically puts on a concert every Sunday.”

“Their worship music style is exuberant and enthusiastic,” says Apsley, who inaugurated Valiant Productions’ installation department in 2018. “They needed a system that can handle any type of performance on a weekly basis. Plus, it can get loud at times, so Kara’s very precise coverage capability means it can hit every seat in a challenging auditorium but keep the energy in the house.”

Valiant Productions Head of Audio Zack Morris utilized L-Acoustics Soundvision software to design the system’s coverage pattern, and Apsley says that its precision enabled them to lay out the design and have it come to life as planned when the system was installed. “Everything is so well designed—the enclosures, the amplifiers—that we knew what the performance would be like before we even flew our first array,” he says. “The spread-out seating, the concrete floors and reflective walls are not at all friendly to sound, but Kara keeps the sound where it needs to be, so the place sounds great.”

Reaves adds the Kara system, which is paired with a Midas PRO X FOH console, was chosen based, in part, on his own experience with the product. “Kara has a very nice analog-type sound, which perfectly matches up with the Midas’ mic pre-amps,” he says. “It’s a nice, warm sound that works very well for this type of music. And everyone loves the Air EQ Contour on the amplified controllers. They just make the system sound so musical and so live. The church wanted a seriously venue-class sound rig, and Kara is exactly that. You can tell it’s made a difference in worshipper engagement; Kara just gives the music a truly engaging feeling.”