Historic Cathedral Acoustically and Visually Replicated In Auditorium In Spain 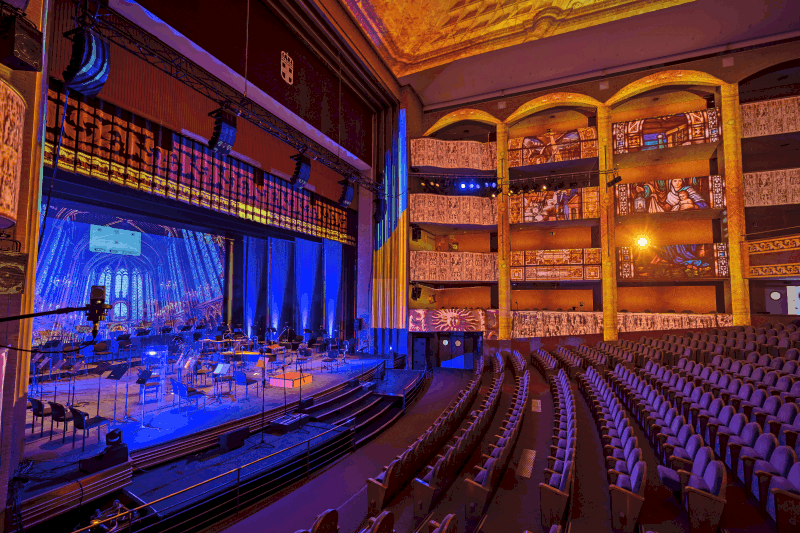 The Almería (Spain) City Orchestra’s annual Christmas concert late last year needed to be presented in a different venue than usual due to the pandemic. d&b Soundscape was employed to help create the appropriate sonic environment for the production.

The orchestra had chosen to perform Handel’s Messiah, which was delivered on a large scale with a chorus and soloists accompanied by a full orchestra. The concert would normally take place in the city’s fortress cathedral, a historic venue originally built in 1524 with influences of Gothic and Renaissance architectural styles, providing a beautiful visual backdrop as well as unique acoustic qualities.

When the show’s production team realized that they would not to be able go ahead with the show in the cathedral as originally planned, they were forced to move it to a larger venue, the Auditorium Maestro Padilla, also in Almería. With that decision made, the team set about recreating the atmosphere and overall acoustic dynamics of the city’s cathedral in the auditorium.

“The challenge was to transform the Auditorium Maestro Padilla into a cathedral, visually, acoustically and through scent, while maintaining the safety recommendations and the highest level of performance,” notes Mercedes Oliver, General Manager, OCAL and Producer of the event.

The team looked to a d&b Soundscape system based around the T-Series to recreate the sound experience of the fortress cathedral. Soundscape is powered by the DS100 Signal Engine audio system processor based on an Audinate Dante-enabled signal matrix. Additionally, it provides creativity options through its two software modules, En-Scene and En-Space.

“The immersive sound was a new element that helped us achieve the desired atmosphere,” Oliver continues. “The exceptional performance by the musicians was supported by just the right amount of reverberation to contextualize the work of a religious building in a sensory way.”

Mix Engineer Chelius Salmeron adds, “I was lost for words. Immersive sound, video mapping and incense created a cathedral around us.”

En-Scene is a sound object positioning tool allowing the individual placement and movement of up to 64 sound objects. It’s designed to accurately depict stage scenarios so that each sound object corresponds both visually and acoustically. Meanwhile, En-Space is an in-line room emulation tool designed to create and modify reverberation signatures within the space. These reverberation signatures are emulations derived from acoustic measurements of nine renowned performance venues and convolved within the audio processor. The production team used a 180-degree En-Scene set up in the venue, which, when combined with En-Space, helped recreate the acoustic environment of the cathedral as well as an immersive, controlled sound experience.

“The orchestra is used to performing unamplified and it was important to interfere as little as possible with this transparency. Soundscape helped us to create a natural sounding space without sacrifice,” states Juanma de Casas, EAS Manager, d&b audiotechnik Iberia. “Secondly, Soundscape’s acoustic emulation software enabled us to achieve our main objective, which was to simulate a cathedral environment in an entirely different space acoustically. Combining this with the visual sensation of video-mapping the cathedral’s interior onto five surface areas of the auditorium made for an incredible result.”

Luis Lopez, Director of Producción Técnica TJL, concludes, “From the moment the audience entered the stalls you could feel the excitement. This is an integrated show, where the audio, lighting and the visual go hand in hand, here the coordinated work of the whole company, the sound department and the video department, resulted in an impressive show.”

Equipment on the project: