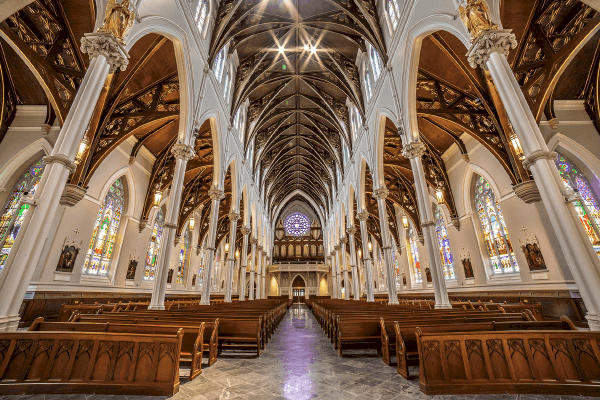 The recent $26-million restoration of the 150-year-old Cathedral of The Holy Cross in Boston, a 2,000-seat cathedral, saw New England-based CommLink Integration taking on the challenge of implementing new “works everywhere” wireless microphone systems, utilizing a variety of components from RF Venue.

And this was the case in the cathedral project, where CommLink only needed eight channels of wireless mic systems. They need to work reliably across an expansive floor plan, well out of range and line of sight for any single set of receive antennas, with the classic architecture and strict aesthetic limitations adding to the challenge.

While determining coverage areas and antenna type may require a bit of trial and error, the actual wiring for a multi-zone system at the rack-end is pretty straight forward. A 4 Zone antenna combiner from RF Venue serves as the “head end” of the approach, combining each A and B diversity channel down to a single A and a single B. This output pair then connects to a multi-channel antenna distribution system, which then feeds the inputs on the wireless mic receivers.

At the rack housing the receivers, CommLink configured the multi-zone system using two cascaded Shure ULXD4Q wireless mic receivers and an RF Venue 4-Zone. Based on the location of the AV rack (inside a closed office area) – an estimation was then made over practical multi-zone coverage for the wireless system, taking into account antenna type, placement, and optimal line of sight conditions that would meet the strict aesthetic requirements of the project. Coaxial cable run length versus RF-over-fiber distribution was also considered.

A pair of Shure UA864 antennas were mounted on the wall of the altar area in the sanctuary, out of sight from the congregation. This section of the cathedral comprises zone 1, and has an effective range just to the edge of the altar, which is where zone 2 picks up coverage.

Zone 2 begins in the transcept area and utilizes the installation white RF Venue Diversity Fin antenna. From a single point of installation high up on the wall of the cathedral and camouflaged, the polarization diversity antenna system is hard to spot even if you’re looking for it. Over larger areas, particularly indoors with a variety of reflective surfaces, like the marble floor of the cathedral, signal fades due to angle and orientation of the signal are even more pronounced, with the antenna specifically designed to help in maintaining adequate signal level due to cross linear polarization fading (more info and a free eBook available here).

The largest area in the cathedral, the main congregation, is where zone 3 picks up the roving mic transmitters. Here, another Diversity Fin in white was installed high up on a column. For certain church services, the mic transmitters will move down the long walls of the cathedral, and the system needs to reach areas well out of reach of the first two zones.

There was a chance this area may require a 4th zone, so Commlink budgeted a backup plan to further extend the system with another Diversity Fin antenna if needed, which would then likely require an RF-over fiber option like Optix (from RF Venue) due to the 2,000-foot potential cable run to the rear of the cathedral. Having thoroughly tested the three zone coverage areas after installation, the 3-zone configuration was deemed adequate.

The Diversity Fin antenna in zone 3 also employs in-line amplifers to boost the signal and makeup the signal loss over a run of several hundred feet of RF Venue RG-8X cable. These in-line amplifiers are powered by DC on the coaxial lines provided by the 4 Zone antenna.