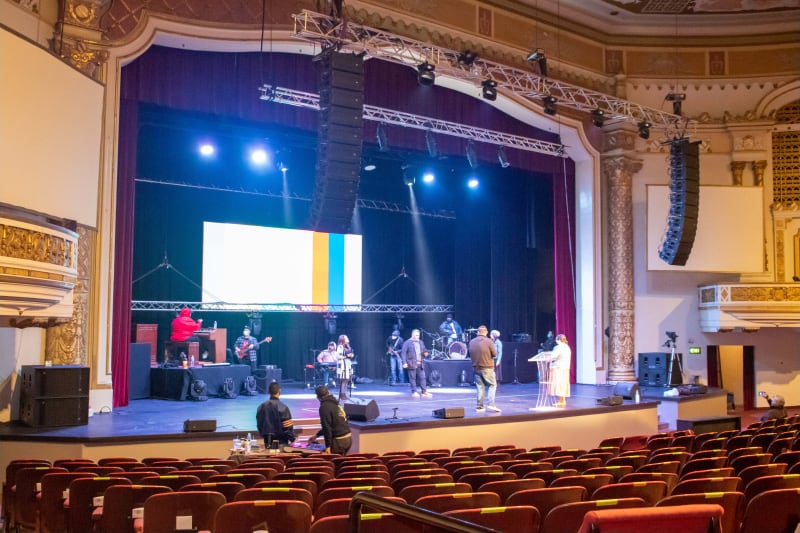 A recent audio upgrade at the worship sanctuary of Cornerstone Church in Fresno, CA incorporates loudspeakers from the DAS Audio’s AERO, UX, and EVENT Series. They were implemented by integration firm Jag Sound Productions, which is also based in Fresno.

Services at the church are both traditional and contemporary in nature. There’s a large platform at the front of the room and fixed seating for about 1,400. The space also serves as a performance venue for a variety of touring acts.

The new system, designed by Jag Sound Productions owner Juan Gonzalez, consists of 20 DAS Audio AERO-20A 2-way powered line array enclosures—flown 10 loudspeakers per each side of the stage. Low frequency support is provided by four DAS UX-218A powered subwoofers, positioned two per side of the platform.

Gonzalez also deployed four DAS EVENT-26A compact powered line array enclosures for front fill. “We needed loudspeakers that offered a combination of excellent music reproduction capability while also providing first rate speech intelligibility,” he says. “With this combination of loudspeakers, the music sounds well defined and rich while speech is clear and articulate. If the congregation can’t clearly hear what the Pastor is saying, then the message is lost.”

The new system was installed in January and was immediately placed into service. Gonzalez reported that the client is pleased. “Pastor Franklin tells me he is very happy with the new sound system. He said that numerous members of the congregation have noticed a dramatic difference as well. The new DAS system makes a tremendous improvement to the sound throughout the room and, in the process makes services more engaging for everyone in attendance. It’s been a win-win for everyone involved.”