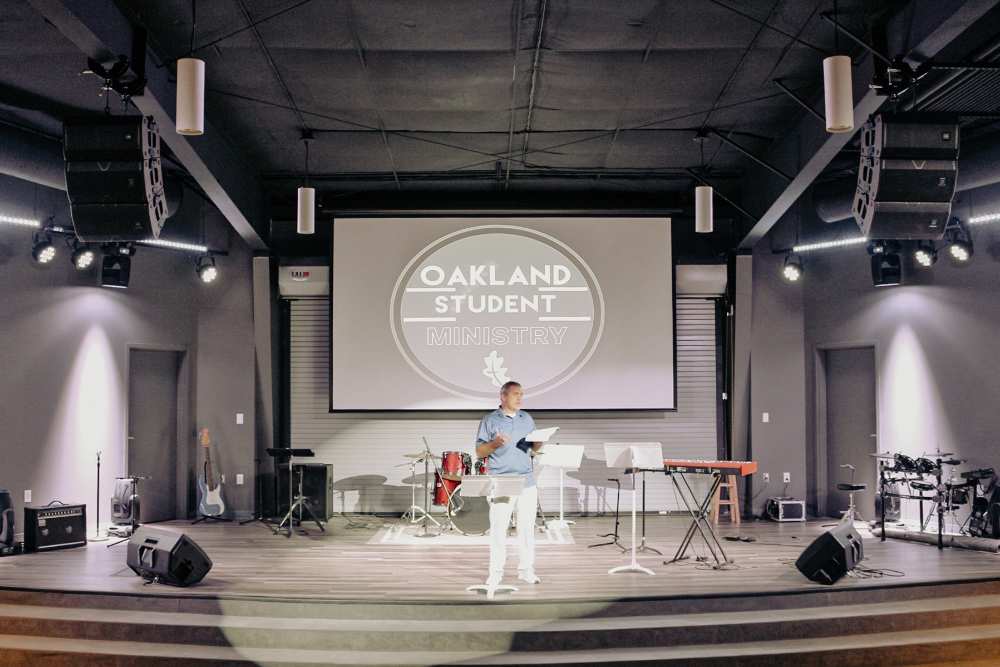 A new youth facility at Oakland Baptist Church in Corinth, MS is outfitted with a sound reinforcement system headed up by Vantec line arrays and more from DAS Audio in a project managed by Florence, AL-based design/build AV integrator Sutherland Sight and Sound.

The youth facility measures 60 feet long by 62 feet wide, with a stage area that’s 20 feet long by 27 feet wide and faceomginto the width of the room. Seating capacity is roughly 300 people, and the seats are moveable, making it easier to adapt the space to different event requirements since it’s frequently used for various gatherings and special events in addition to the weekly church services. There’s a considerable amount of music in services, so the system needed to deliver quality music reproduction capability in addition to vocal intelligibility.

After consulting with church officials to ascertain their requirements, Michael Embry, Sutherland Sight and Sound’s Project Manager and the senior technical project leader for this installation, penned a system utilizing Vantec-20A line arrays—flown three enclosures each for the left and right hangs, which are suspended over the front edges of the stage area. Low-frequency support is provided by a pair of Vantec-218A powered subwoofers, with one enclosure each positioned on the floor for the left and right sides.

“Sound quality is, obviously, the most important requisite and, in this regard, the Vantec-20A is a very well-designed loudspeaker,” Embry states. “It provides a high level of speech intelligibility while also having solid music reproduction capabilities, all while having a compact form factor that never distracts the audience’s attention. I was also impressed with the system’s easy wireless control for gain shading, along with the quick and clean linear response that results in a very natural sound utilizing FIR filters. The power efficiency of the system is excellent, and the hardware makes rigging the system much easier than many competing products.”

“I should also point out that, originally, we had planned on using a few fill speakers as part of the system,” he addes. “After we tuned the room, however, we found that the position of the flown clusters in the layout of the room made this unnecessary. The Vantec-20A’s dispersion provided all the coverage that was necessary.”

The new system was initiated in 2020 and since then has been very well received. “This system installation has been a huge success,” says Clay Hughes, technician at Oakland Baptist Church. “The audio quality is first-rate no matter where you happen to be seated in the room. The spoken word is remarkably clear, and this enables the congregation to fully grasp the nature of the sermon.

“Likewise, the system’s ability to reproduce music is equally impressive. The end result is that the DAS equipment makes services much more engaging and meaningful. I’d also like to say ‘thank you’ to the entire team at Sutherland Sight and Sound. They were great to work with, always open to suggestions and, ultimately, they delivered a sound system that will serve this church well for many years to come.”