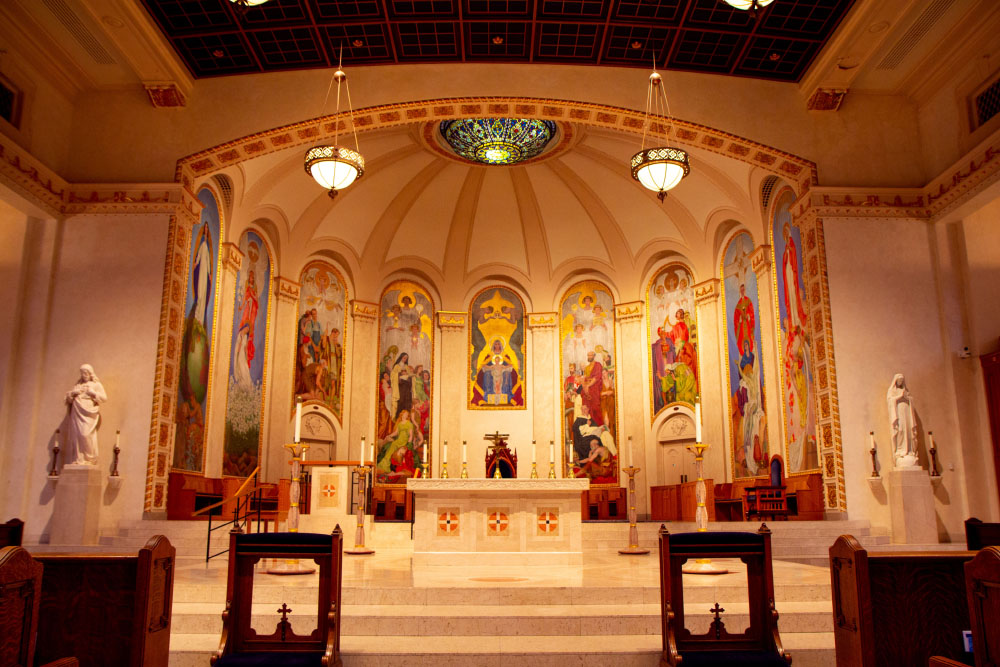 A recent sound reinforcement system upgrade by integration firm Alpha Sound at the sanctuary of St. Mary’s Cathedral of the Immaculate Conception in Portland, OR utilizes an Audinate Dante audio networking backbone to keep cable runs to a mimimum while helping to preserve the historic architecture of the space.

“One of the main things that Dante does for us is it allows us to simplify the wiring,” explains Devin Sheets, Lead Design and Installation Technician with Alpha Sound. “Dante allows the installation to go smoother because this is a space where the cabling is not standard. It’s not like a new build where you have the flexibility to install during construction. It’s not like a building where the wiring was done to industry standards and based on modern equipment.

“In this space we have to keep it simple, and the rule is if you can get a Cat-5 cable there, you’re good,” he continues. “You plug it in, and you have full access to the entire architecture.”

The Alpha Sound team was able to access panels behind the ceiling and within the walls behind the choir organ to integrate 1-gig network infrastructure for a Dante network. From there, the team installed a workflow of Dante-capable endpoints, including:

— A NEXO DTD processor/amplifier with Dante.

— A Yamaha MRX7-D processor with Dante.

Alpha Sound founder Duane Sheets adds that using Dante in a house of worship also brings a” level of elegance” in terms of control and management for on-site staff. For example, teaching Dante Controller software – which allows for point and click management of the system – often takes minimal training.

“That’s been our experience,” he says. “We are able to train people on site at the other churches we’ve worked with in a fairly minimal amount of time to feel comfortable working on the Dante system.”

Msgr. Gerard O’Connor, Rector at St. Mary’s Cathedral of the Immaculate Conception, concludes, “We’ve got really a state-of-the-art system that everybody is really quite pleased with. The funny thing is people say to me ‘Oh, you really sing well’ and I don’t. And I’m actually a very average singer. But when I do sing mass, it sounds really good, so I’m happy with it.”