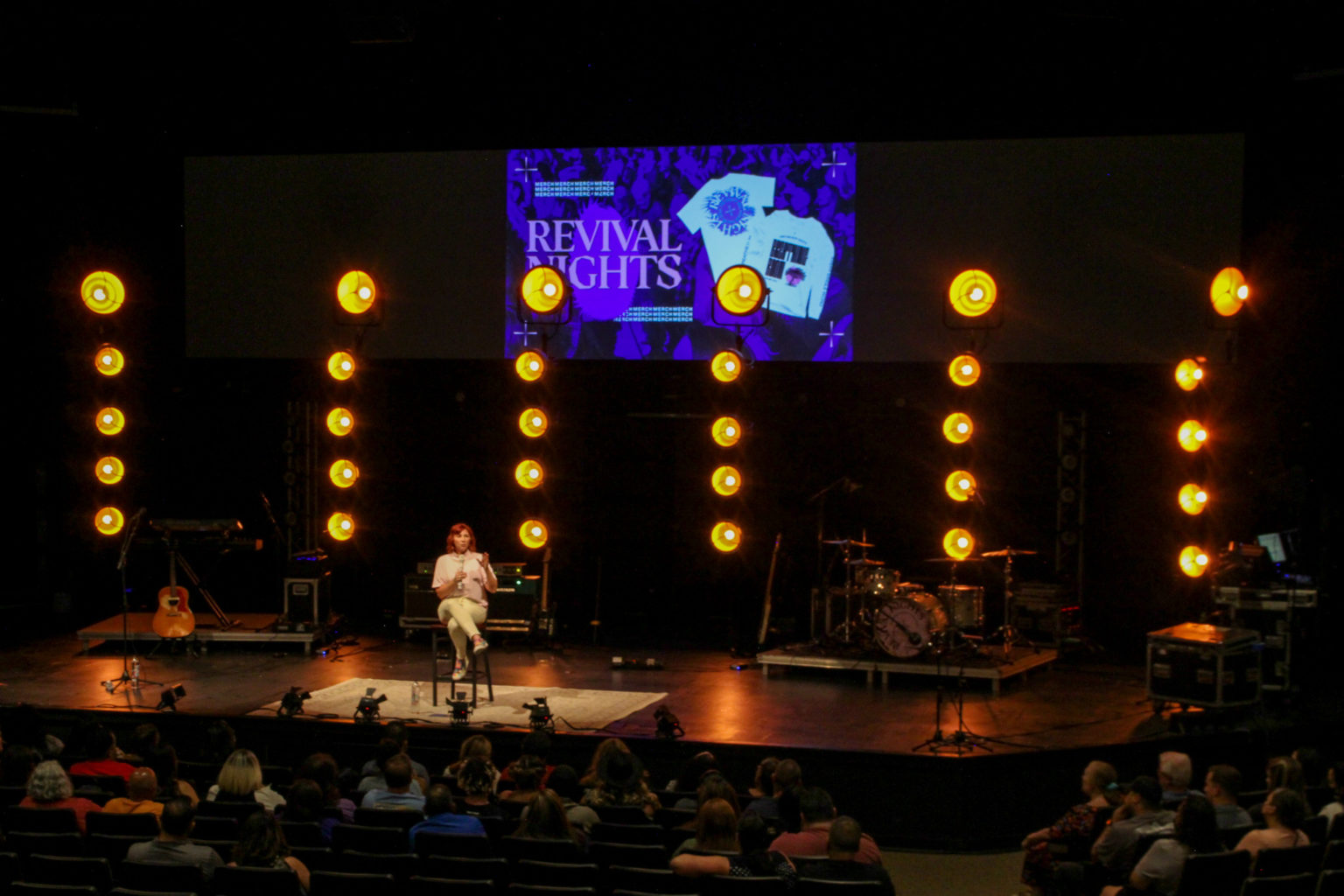 World-renowned worship leader and recording artist Kim Walker-Smith is back out for the latest run of her Revival Nights Tour that started in October of 2020. The Grammy nominee’s tour included recent stops through five cities across Arkansas, Tennessee and Texas, with City Church in San Antonio, TX hosting the kick off night of the July run. With the help of promoter Transparent Productions, production provider Front Porch Productions, and MEGA-LITE products, the singer-songwriter had another successful night of her Revival Nights tour.

Front Porch Productions is the provider for all of the production of Walker’s tours including audio, backline and lighting. Owner of Front Porch, Aaron Talley, has been with Kim Walker-Smith for the better part of a decade as the monitor engineer amongst other things.

“The dates in 2020 were a quick turn around from announcement of the dates to the night we would be there, sometimes as little as 15 days,” said Talley. “As we looked at 2021 and the way things were going to move forward for us, as far as touring events went, started to become a little more defined. It was obvious that we needed to provide creative lighting capabilities that were on the quality level as the audio we provide for this tour.”

“All of the Circa Scoops and Baby Colors were used to accomplish simple tasks such as foot lighting from the Baby Colors or brightening up the house lights at the start of the night with the Circa Scoops as well as fulfilling the artistic need that they are primarily used for,” said Talley. “We go into venues, primarily churches right now, that have vast and varying capabilities, some haven’t even been fully staffed or maintained for the better part of the last year. We never know what we are going to be able to use from the existing building lighting system.”

The Circa Scoop LED series are unique eye-candy fixtures that add interest and color to any concert, church, theater, or club. Designed with four different elements and a lightweight housing, they add a one-of-a-kind look. The Center Engine of the Circa Scoop LED (medium sized unit) is equipped with 45 WW and Amber LEDs that create a warm sunset effect, ideal for theatrical use. Surrounding the Center Engine is the “Reflective Pattern Ring” which has an additional 87 WW LEDs, creating a nice soft-edged effect for any setting. The Inner Ring, includes 144 RGB LEDs, 8 segments and the capability to control the macro speed and dim down different colors, enabling it to set a wide mixture of colors. In addition the Outer Ring also features 8 segments and is equipped with an extra 192 RGB LEDs that illuminate a 140º angle. The 336 RGB LEDs can produce multiple color combinations and facilitate the ability to create authentic looks that can be used as dazzling eye-candy effects. With the RGB LEDs, the Circas can produce a bright cool white, allowing it to alter the mood and intensify or neutralize a color. The Inner and Outer Rings can generate pulsing random strobe and macro effects, giving the Circa Scoop further diversity within one single unit.

“The Circa Scoops are big, bright and have a lot of different parts that light up on them, even connecting a bunch of them together still doesn’t take much power and we run them in 55 channel mode,” said Talley. “They can exhibit saturated theatrical style or flash and trash. They are interesting to look at on their own when they’re on and off. I chose them because those characteristics allow the ability to use them alone and never feel like you are looking at the same thing over and over with adequate programming.”

Favored by Talley because of the use of the barn doors, the ultra-compact, luminary color-changing Baby Color H84s are equipped with seven 12W LEDs with an output that contends with the output of larger fixtures. The RGBWAUV LEDs produce a wide range of vibrant colors with the ability to add UV for a distinct hue effect. The fixture has a 20° beam angle and comes with a diffuser that opens the beam angle to 25°. It is controllable via DMX 512 and has strobe, macro, and dimmer effects. A double-mounting yoke allows the unit to be set upon the floor or rigged from a structure.

With another successful night in the Revival Night Tour, Talley can always count on the support of the MEGA-LITE team for all of his lighting needs.

“MEGA has been great with support,” said Talley. “We have all but destroyed a few of them and MEGA has gone out of their way to help get them back and usable again.”