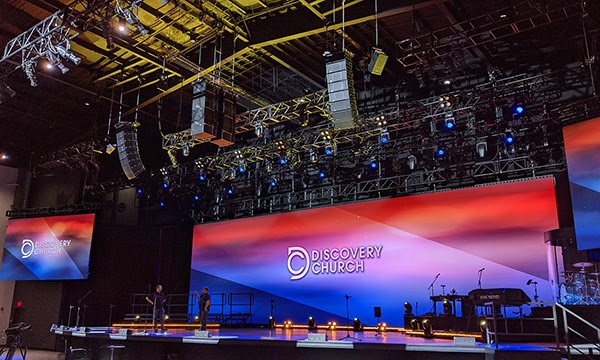 A spacious 12,000 square-foot worship auditorium on the new main broadcast campus of Orlando’s Discovery Church has been outfitted with a sound reinforcement system headed by Meyer Sound LEOPARD line arrays.

“We were looking for a major step up from the aging point source system at our old broadcast campus,” says Zack Howes, technical director at the new Sand Lake campus. “We wanted a system with higher output and greater intelligibility, and also rider-friendly. We wanted to up our own game at weekend services but also be ready for high-profile special events.”

Long before “groundbreaking” on the new campus (actually a total renovation of a former sporting goods store), the church tech team linked up with Orlando-based Pro Sound, a Solotech Company, to evaluate possible approaches. As part of the process, a temporary LEOPARD system was installed at the old campus for “A Night of Worship.”

“This is an event we have twice a year where we really open it up and pull out the stops beyond regular Sunday services,” says Howes. “The result that night was awesome. LEOPARD blew away what we already had in that space.”

The new system, designed by Pro Sound Lead Engineer Craig Compton, is anchored by main arrays of eight-each LEOPARD line array loudspeakers plus eight UPM-1XP loudspeakers as front fills and two of the new ULTRA-X42 loudspeakers as fills to cover side seating. Low frequencies are bolstered by eight 900-LFC low-frequency control elements, with six flown as a cardioid center array and two on the floor.

“The new system ticks all the boxes in terms of headroom, intelligibility, and coverage,” says Howes. “We still have a bit of a lively room, but despite that the sound is very controlled for broadcast, keeping almost all reflections away from the stage.”

The clarity of the system has boosted intelligibility to the point where services can be run 5 to 6 dB quieter than with the old system. But when it’s time for special youth events, the system has proven ample reserves.

“We’ve had contract mixers come in here who have worked with major touring artists, and I remember one of them, the first time he mixed on the system, had a giant grin on his face,” Howes says. “Also, our pastoral leadership is pleased that we can offer audio quality that is on par with the top entertainment attractions in Orlando. We feel we have an important message to communicate and want to make sure we deliver the message with the same—or better—clarity and impact.”

Good relationships with immediate neighbors also are important, and in that respect, Howes points to the effectiveness of the cardioid subwoofer array. “It not only keeps energy off the stage, but it also greatly reduces energy hitting the rear wall. We have an apartment building only about 100 feet behind that wall, but I have yet to hear of one complaint.”

Other members on the Pro Sound team contributing to the effort were Jason Cooper (project management), Jason Tart (lighting, truss, and rigging), and Pete Suarez (fabrication). The front end of the system incorporates DiGiCo SD-12 digital consoles, one each for broadcast, FOH, and monitors, all linked by an Optocore fiber optic backbone.