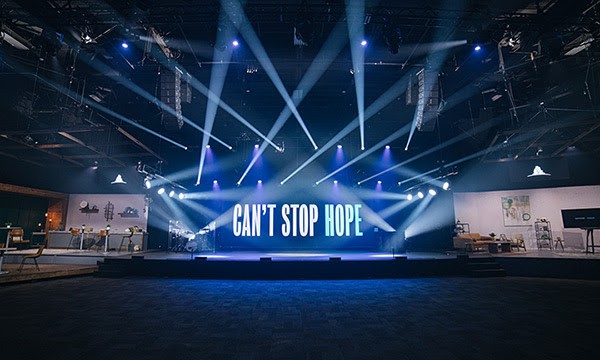 12Stone Church, a multi-site congregation serving the Atlanta metro area, is rethinking worship with a “12Stone Home” initiative. With a fusion of remote streaming and in-person worship, a new Meyer Sound LEOPARD system plays a key role in the success of the concept.

What It’s All About

The new system is flown inside the main worship auditorium at 12Stone’s Sugarloaf campus. A rapid renovation last summer reconfigured the 900-capacity room to serve as a hybrid combination of live worship space and video production studio. With the old point-source system already slated for replacement, a new LEOPARD-based approach was the odds-on favorite. LEOPARD arrays already had been installed at four other 12Stone campuses.

“We went with LEOPARD because we’re so accustomed to it,” says Taylor Davis, production director for the church. “It’s part of our audio DNA at this point. But for this new ministry, it also gives us extraordinary flexibility. We have enough LEOPARD elements and subwoofers to change the room to in-the-round with four arrays. It makes us very nimble, so we can work in any room configuration. In fact, all the production in here is touring-style, with portable decking so we can turn the room or put the stage at center.”

When the pandemic lockdown hit last summer, the 12Stone production staff worked with systems integrator Clark, headquartered in nearby Alpharetta. The goal was to get new technologies up and running as quickly as possible. “It was critical that the new concept get up and running so church members felt connected,” says Luke Roetman of Clark. “Meyer Sound partnered with us to move quickly, so we had everything in place inside four weeks.”

Prior to the pandemic, 12Stone had broadcast most services from the Lawrenceville campus. However, for the new 12Stone Home format, production shifted to Sugarloaf to leverage the added technical flexibility. “When we had to close down our campuses and push everything online, we had to reinvent how we do ministry,” says Davis. “We realized we wanted to build a space more conducive and focused on an intimate experience, one that breaks down the walls. But once we could come together we wanted to have the energy of the people gathered in the room. It’s a delicate balancing act every week.”

“This campus was rebuilt with 12Stone Home in mind,” adds Audio Director Dennis Frazier, “but we wanted to make sure those who now can come in person — about one third capacity currently — receive a top-notch experience. It’s an important part of the broadcast for them to react to the teaching with applause or laughter, and our new LEOPARD system certainly helps ensure they have the best possible listening experience.”

In its current end-on configuration, the system comprises nine LEOPARD compact line array loudspeakers per side. Two additional 900-LFC low-frequency control elements are flown behind each main array. Seven 1100-LFC elements are on the ground with two ULTRA-X40 as side fills and six UP-4slim as front fills. Clark’s Tom Donohue supervised the system design with final tuning by Clark’s Ed Crippen.

According to Frazier, improvements realized by the new system were noteworthy. “I could immediately tell a difference in 8 kHz and above. The clarity without harshness is incredible. Also, the low end is tight and responsive. The 1100-LFCs gave me exactly what I wanted in terms of punch without being overwhelming.”