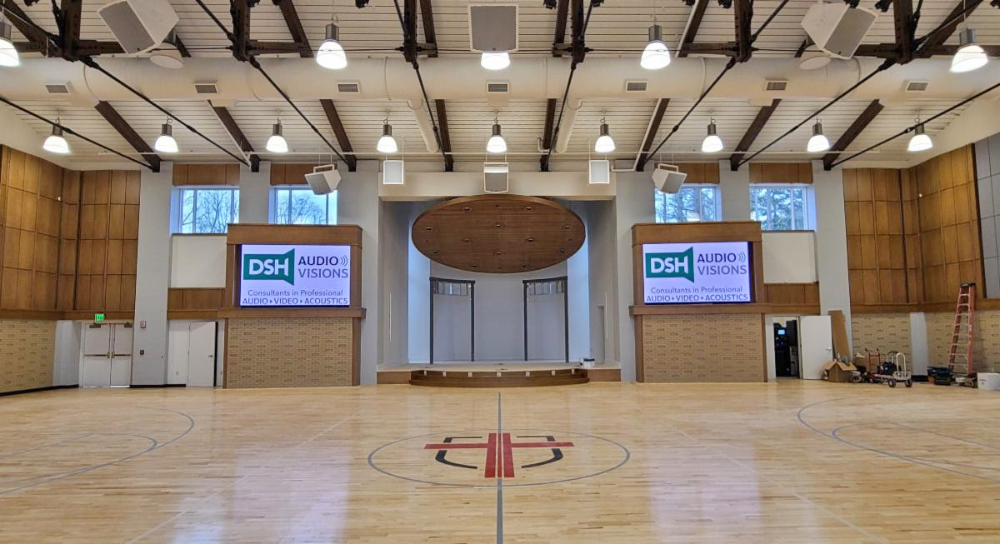 The church has a modern rock praise band that performs to the side of the stage directly underneath the main loudspeakers, which has the potential for feedback and low-frequency buildup that can interfere with speech intelligibility and clarity of music. The room is acoustically treated with a combination of absorptive and diffusive surfaces to reduce instances of slap and flutter echoes, with David Hosbach from DSH Audio Visions (based in Wisconsin) designing the audio system around Fulcrum FH1596 full-range coaxial horns suspended from the ceiling in groups of three at the front and middle of the space.

The pattern control of the loudspeakers helps to focus sound directly on the congregation while reducing spillage onto the band below. “The amount of directivity can mean the difference between success or failure of a sound system,” says Hosbach. “The horn loading in Fulcrum’s FHs gives control to below 500 Hz which is critically important. That translates to significantly better clarity for speech and definition for music.”

In addition, two Fulcrum Sub215 dual 15-inch direct-radiating subwoofers are suspended at the front of the space between the full-range loudspeakers to enhance the low-end foundation. “The FHs create a fantastic full range system on their own,” Hosbach notes. “We added the Sub215s to extend the system response to well below 50 Hz to maximize flexibility.”

The loudspeakers are driven by Powersoft amplifiers and Symetrix DSP, with an Allen & Heath SQ-7 at front of house providing the mix capabilities.

“We have heard nothing but wonderful comments on the sound,” concludes Parish Administrative Officer Laura Zabaski. “People are ecstatic with the final results.”