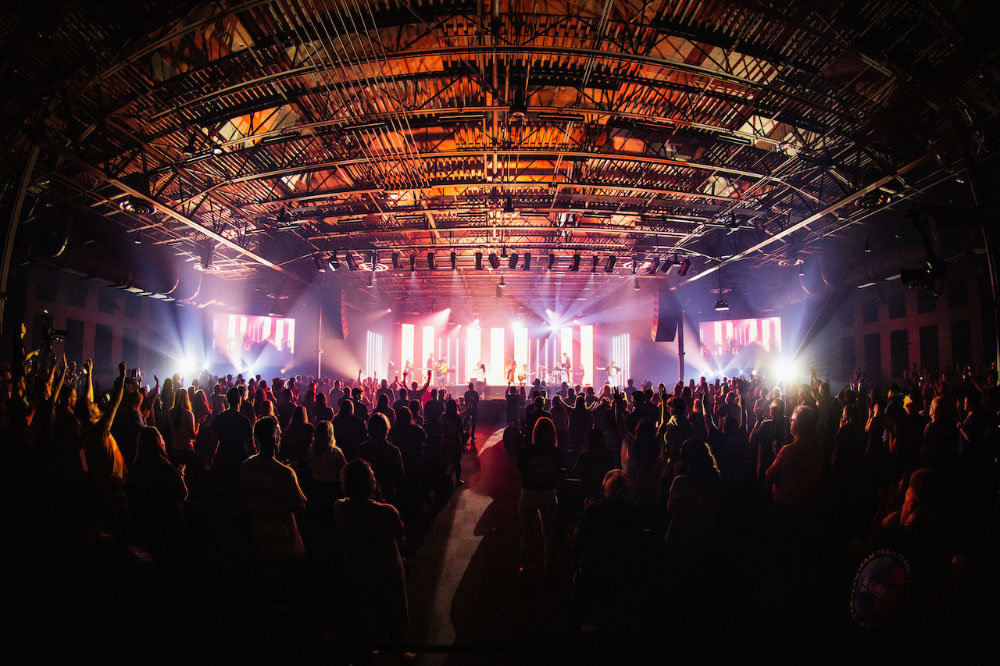 The new church building of The Belonging Co (TBCo) in Nashville has been outfitted by AV integration company Diversified (based in Kenilworth, NJ and offices in several nations around the globe) with a new house sound reinforcement system utilizing a variety of components from d&b audiotechnik.

Members of the congregation consist of musicians, producers, and others who make their living in professional music. During its rental facility years, TBCo purchased its first d&b loudspeaker system, a J-Series rig, which was loaded in and out of the temporary spaces.

“I was producing, mixing albums, and touring as a worship leader for years before I became a pastor, so sound has always been a big part of my life,” states Pastor Henry Seeley. “In a town like Nashville, where many people are part of the music industry, good sound in church is more than just a luxury — it’s a huge part of helping people engage without being distracted, especially for those who spend much of their week focused on creating music at a world class level.

“I’ve been a big fan of d&b loudspeaker systems for a long time, so it was no surprise to my team when I asked them to approach Diversified about a system for our new church building,” he continues. “We ultimately decided on a KSL rig for the space and could not be happier. The punch and clarity [of] these boxes and the consistency throughout the room deliver an unparalleled experience. We get comments from people all the time about how clean the mix sounds in our services, and the d&b KSL is a fundamental part of that experience.”

The SL-Series is noted for its full-range broadband directivity and extended low-frequency response. Well-behaved directivity and cardioid pattern control help to keep unwanted reflections off the walls to increase intelligibility and also provide a quieter stage environment.

The church purchased its first permanent home in late 2018 in the Metro Center district of downtown Nashville. Construction of a 1,470-seat, 15,000-square-foot phase one building began in 2019 and wrapped up in the middle of the global pandemic of 2020.

“Successfully converting a warehouse into a high-performance worship facility is full of many challenges, most specifically around trim height, sight lines, and maximum weight loads,” states Tim Corder, Director of Strategic Accounts, House of Worship for Diversified. “This room only has a maximum of 21 and a half feet to the bottom of the roof deck which is extremely tight to fit the kind of PA that this music style expects and achieve consistent coverage performance throughout the seating space with minimal delay and fill speakers. Sight lines are a constant tension to navigate – large screens necessary for image magnification and camera shots must work in harmony with the large drivers in the loudspeakers. And, of course, buildings like this were not constructed originally with the expectation of thousands of pounds of production equipment being suspended from steel.”

Corder adds that today his team seems to be tasked just as often with repurposing existing spaces as building from the ground up due to the increasing scarcity of real estate in the up-and-coming areas of many cities. “One of the most significant audio design challenges in this space was that the stage is located on the long wall of the rectangle, leading to both a deep and wide seating area. We knew early on that the space would require more than two arrays to cover evenly.”

Although the church owned the existing J-Series system, the new space would still require additional boxes to achieve the coverage requirements, which led to investigating the latest technologies from d&b as well. Diversified organized a demo for the church of the J-Series alongside the recently introduced KSL loudspeakers to quantify the performance goals.

“There was no doubt from the beginning that big boxes with big drivers would be required to move air and provide the experience the church was expecting,” Corder says. “Because the horizontal listening field was so much larger than the previous spaces and we had such limitations in vertical trim, we were intrigued that KSL may do a better job than the older J-Series in minimizing negative artifacts from inherent speaker coverage seams while maximizing pattern control. The results of the demo blew everyone away; impact and pattern control combined create a really stunning result with the KSL system that was head and shoulders above the rest. The performance of the system is the anchor of this facility.”

The Diversified team partnered with Gavin Haverstick (Haverstick Designs) on the acoustic design for the new room, with the integrator’s Chris Clark and Nick Geiger instrumental in the PA calibration and commissioning. Both d&b ArrayCalc and R1 software were used to create and qualify the PA design throughout the construction process.

“I’ve been a huge fan of d&b since I first started at The Belonging Co when we were mixing on our J-Series rig at Rocketown,” states Brenton Miles, a member of the audio team. “Being in our new space, the KSL does not disappoint. Still my favorite rig to mix on. So much dynamic range, warmth and the punchy goodness a d&b loudspeaker system is known for, and all the benefits of the SL-Series boxes benefits with the customizations within R1. The SL-Subs still blow my mind with how much output they produce while keeping practically non-existent LF behind and on stage. Being out on the road again now, I always look forward to coming home to church, especially if I get to mix! Tim and the Diversified crew did an outstanding job of integrating our new systems and helping translate the necessary protocols to our team for implementation and knowledge on the rig.”

Main left and right arrays are comprised of seven KSL boxes each – two 80-degree horizontal boxes on top with five 120-degree horizontal boxes below. A single Y7P point source center fill covers the first few rows between the two main arrays. 24S-D point source out fill boxes wrap the horizontal coverage to the 160-degree mark in the front of the room, with a single Y10P in each rear corner. 10S-Ds serve as front fills around the perimeter of the stage with six SL-SUBs on the floor under the stage to widen the sub coverage to the size of the listening area.

“The technology utilized in this room is an incredible tool to support the worship experience The Belonging Co wants to create for their congregation,” Corder concludes. “My favorite part of this entire project is that TBCo embodies so beautifully that what is happening during a service and how people engage with God is the most important goal above all. The d&b KSL system represents the best of the best in loudspeaker technology and its implementation in this room elevates the art that can be created. But the most important thing is never overshadowed: the purpose of this space is for people to worship God without distraction and with excellence. I’m very proud that our team is in The Belonging Co’s corner achieving the end result.”