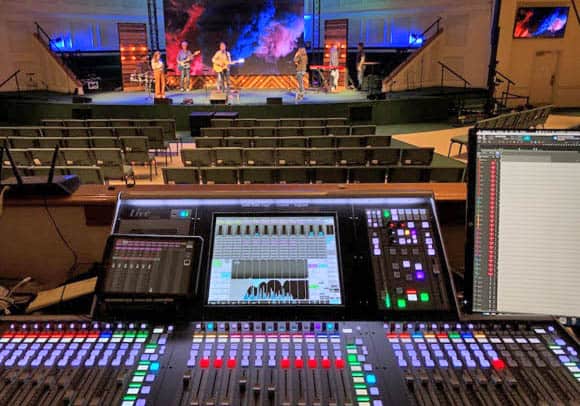 Southcrest Baptist Church recently remodeled a former worship center on its campus in Lubbock, TX, reopening it as The Venue, a multipurpose space outfitted with a new Solid State Logic Live L200 digital mixing console. The new L200 desk is being used to mix front-of-house, monitors and livestreams of Sunday morning services that feature a five-piece contemporary band.

The new L200, which was put into service in early November, is the third SSL Live desk to be installed at the church. In 2017, it opened a newly constructed 46,000-square-foot, 1,600-seat worship center on its campus that is equipped with a pair of SSL Live L300 consoles. One manages front-of-house and monitors and the other handles audio-for-video duties, including livestreaming and recording.

“We put in a new audio system in The Venue and wanted an SSL board to keep the continuity between the two main spaces,” says Rusty Trowbridge, the church’s technical director and FOH/monitor mixer in the worship center. “We have three Live boards now and it’s awesome.”

Trowbridge and his AV media team integrated the new L200 themselves in the revamped space, which can hold up to 800 people. The new SSL console, which is operated by FOH mixer Tyler Gutierrez, includes an ML 32.32 Stage box with SuperAnalogue mic/line inputs at the stage with an ML 32 at the FOH position, networked via an SSL Blacklight II.D MADI Concentrator.

“We’re doing a livestream out of The Venue, which was one of the things that helped us choose the SSL Live,” says Trowbridge. “We can actively mix the live stream but not necessarily need someone mixing just for the live stream. With all the routing that we have on these Live boards we can get really creative with how we send things. It gave us the ability to have a dedicated live stream mix without needing a whole other board.”

The system is also integrated with Waves Tracks Live multitrack recorder software running on a Mac mini and an RME MADIface XT USB 3.0 interface, allowing services to be recorded for later editing and broadcast. An identical setup has been in operation in the worship center since it opened. “Ryan Anderson, our audio for video engineer, edits everything in our Pro Tools | HD system,” says Trowbridge.

With the recent launch of The Venue, the AV team members now generate simultaneous livestreams every Sunday. “We’re doing two separate livestreams from the same campus from two different services happening at the same time,” says Trowbridge. “We have our 9:30 a.m. service in The Venue with a five-piece band, and our 9:30 a.m. service in the Worship Center, where there is a small orchestra right now. Our Worship Center Team is usually comprised of a 40-piece orchestra and a 150-person choir in the Worship Center, when we’re not in COVID-19 times.”

In-person attendance is reduced in both worship spaces with the present coronavirus precautions in place, he adds. “But we’re making up for those numbers online with our live streams.”

Prior to the pandemic, Trowbridge was sending about 30 monitor mixes to the stage from his L300 in the Worship Center, with members of the orchestra controlling their individual balances using iPads and the SSL TaCo Tablet Control app. “In The Venue we’re all on in-ears,” he says. “A lot of those musicians come out of our Worship Center space, so they’re familiar with that app. They have a soundcheck every Sunday morning before rehearsals, and during that time the musicians connect to the console with their iPads, making use of the TaCo app.”

Trowbridge reports that Gutierrez, who joined the team about 18 months ago, has been making good use of the dynamics processing on the L200. “We have MCs or people going up onto the platform to talk and we never know who those people are going to be. The compressors are so smooth and open that you can err on the side of caution and compress a little bit more than you need to, to protect the experience of the people in the room. Even though we haven’t had a sound check with that person, we know it’s still going to sound good. It gives us a sense of confidence.”

Although the livestream audio from The Venue is the same as the FOH mix at present, Trowbridge is considering some alternatives for the future, leveraging the flexible routing of the SSL Live desk and its remote-control capabilities. “One thing that I’ve seen work at other churches is using a stereo post-fader aux send. What we like about that is being able to send more of just the pastor’s channel, or more of the lead vocal, just to that one output. Or we might make use of the matrixes. We’re also planning on putting a person with an iPad somewhere to do a separate audio-for-video mix, letting them control that one aux send.”

The building housing The Venue was built in the 1990s, says Trowbridge, and would need some modification before being able to support a modern P.A. rig. “We didn’t want to bite off more than we could chew, so we put some old Meyer Sound speakers on a truss and purchased some additional Meyer speakers and subs. The company that helped with that was AGD Audio.”

Local Meyer Sound dealer AGD Audio Services, based in Lubbock, is owned and operated by Jeremiah Denning, who is also an associate professor in live sound at South Plains College in nearby Levelland, Texas. “Pretty much all my staff guys have gone through the college’s audio program,” says Trowbridge. “So we had an SSL demo day and showed some of the students what we’re doing and how everything routes on the SSL Live. It’s been nice to be able to give back to that program.”