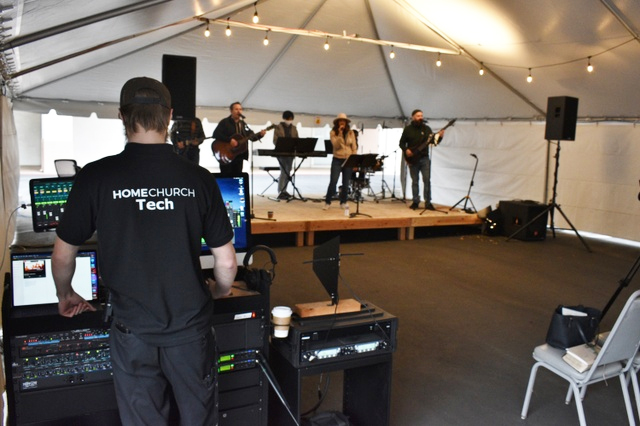 Reasons for the Upgrade

Over the past year plus, the church worked to keep its congregation connected during the lockdown via online and outdoor services. However, its aging analog wireless audio equipment had almost become obsolete because the available radio spectrum in the region is changing and shrinking.

“I’m the nerd that went out there to evaluate the situation,” explains system designer Tim Fairbairn. “Because of the repack of frequencies in the Bay area, we’ve been left with literally three digital TV channels worth of spectrum to shoehorn everything into: 15, 18, and 25. Those are the only ones left without broadcasters. Our friends at Home Church needed eight channels of wireless mics, and they needed not to conflict with the five channels they already have there for in-ear monitors.”

“So, we sought out products with much smaller bandwidth needs,” adds Mike Dow, president and founder of Zamar Media Solutions. “Lectrosonics is the only brand out there that did what we needed in this case. Their Digital Hybrid stuff has always provided good, clean audio signal but the Lectrosonics D-Squared system takes it to a new level in terms of tight-packing useable channels into available spectrum.”

The Beauty of the Design

In a worship environment, technological distractions from the message of the service are undesirable, so visual neatness was also a consideration. “By deploying two DSQD units, which are a half-rack each, I fit eight channels of wireless mics into a single rack space,” notes Fairbairn. “The all-digital system also has no antenna distro needs. We were able to take out all of their analog wireless and antennas, some of which they repurposed in other rooms. So, in the main sanctuary, there’s almost no hardware up front. The pastors have headsets and the singers and musicians use the handhelds. When they walk off, all that’s left is backline, and the pastors teach in front of that. It really makes for a very clean stage.”

Shane Burley, technical director and facilities manager at Home Church, agrees: “So far I’ve really enjoyed working with this new D-Squared system. The compact design enabled us to open up three rack spaces compared to our previous setup, and made moving the rig around the church much easier.”

The DSQD receivers also help Home Church coordinate all frequencies throughout the campus. “Because the receivers can listen to the entire available spectrum,” says Fairbairn, “the customer and I can use Lectro’s Wireless Designer software to scan not only the Lectrosonics channels, but also all the channels for everything they own. They can then make a plan that lets all the wireless gear they’ve accumulated work in harmony across satellite rooms, in-ear monitors, and so on, no matter which brand it is.”

“One of my favorite features is the integration with the Wireless Designer app,” echoes Burley. “It made programming frequencies easy, both for the Lectrosonics system and for slotting in any future RF equipment.”

Home Church’s experience is quite consistent with Zamar’s history with Lectrosonics as a brand. “The Digital Hybrid products were our first products for system commissioning,” Dow concludes. “For us, this was always about the capability — tight-packing, tracking filters as Tim said, going without antenna distro if we can, and so on. Those were things we’d been trying to introduce into other wireless systems.”