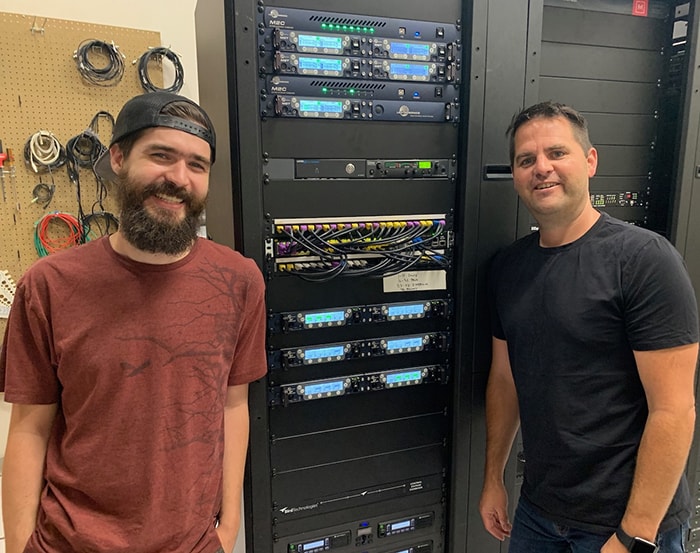 “When we did the upgrade to Duet a few years ago, the key factors were transitioning all of our wireless systems to digital along with having them integrated on the network,” explains Chris Thomas, technical arts director at CHCC. “In fact, the networking aspect was one of our big draws to Lectrosonics in the first place, even years ago. They were one of the only manufacturers doing Dante straight out of the units as opposed to analog lines.”

CHCC audio director Julian Clifton was introduced to the new D² line several months ago and sought to bring the true digital performance and networking advantages to the wireless mic side of the equation. Soon after (and before the onset of the pandemic), the audio team at the church swapped out the existing Lectrosonics Venue2 Digital Hybrid Wireless systems and implemented the new gear, linking it to the network in a process that Thomas notes was “plug and play” in terms of simplicity.

The systems, which operate in the 470.100 to 607.950 MHz portion of the UHF frequency band, have the DSQD four-channel receivers working with a mix of DHu handheld and DBu beltpack transmitters. Clifton notes that eight channels alone are allocated to worship leaders.

“The reason the leaders have so many channels is that we want them to be able to use the talkback feature of the microphones,” he explains. “Specifically, channels 1 to 3 are being sent to a fourth channel for talkback, and then channels 5 to 7 are being sent to an eighth channel for the same reason. We want them to have plenty of communication capability both between themselves as well as with the production team.”

The remaining channels are utilized for a wide range of applications, including mics for vocals, instruments such as guitar and violin, and even keyboards. Further, some of the vocal handheld transmitters are also reserved for people speaking at services. “There’s certainly a lot of functionality,” Clifton says, adding that the audio performance has lived up to expectations.

Both also call out the support they’ve received from Lectrosonics on a consistent basis over the years, which continued through this project. “It’s another big reason we enjoy working with them,” Thomas concludes. “No matter the question or issue, we always get an immediate response that helps in addressing anything that comes up.”

CHCC has been hosting in-person worship services at limited capacity since May due to guidelines brought on by the pandemic. During the lockdown, drive-in services were presented on the campus.