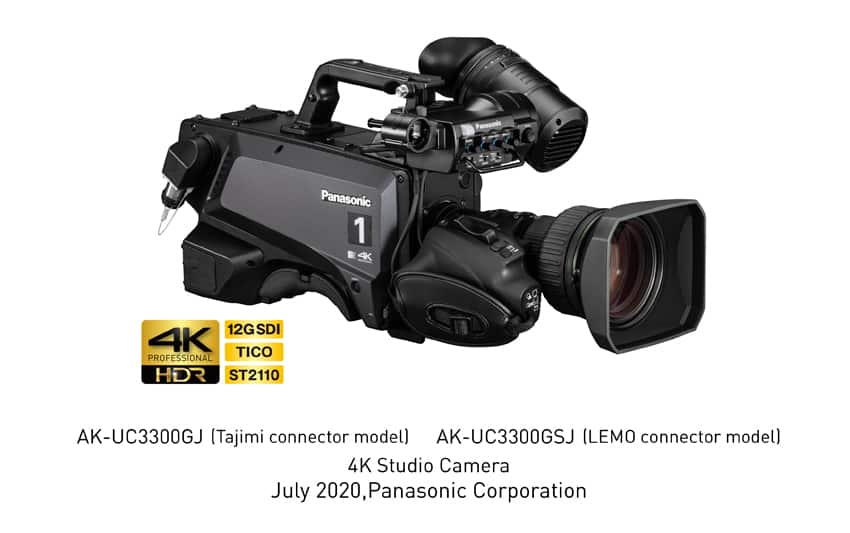 Panasonic has developed the new AK-UC3300GJ/UC3300GSJ, a 4K Studio Camera with high video quality equipped with a large 4K sensor. It’s scheduled for release in the fourth quarter, 2020.

The AK-UC3300GJ/UC3300GSJ is equipped with a large 11-megapixel 4K image sensor and uses oversampling to achieve a horizontal and vertical resolution of 2,000 TV lines. With high sensitivity of F10 (2,000 lx), it enables high-quality video shooting with low noise while maintaining a S/N ratio of 62 dB or higher.

4K and HD multiformat support including 2160/59.94p and 1080/59.94p is provided to enable operation that fits various production application. The interface significantly improves the operability of 4K video production and supports 12G-SDI output capable of sending uncompressed 4K video with a single coaxial cable, TICO over SDI (4K over 3G-SDI) output, which enables the transmission of 4K signals over conventional 3G-SDI cables, and the next-generation IP transmission standard SMPTE ST21103.

In addition to shooting in studios, the 4K Studio Camera system contributes to optimal video production in dynamic environments with flexible support for various applications, including in situations that require high operability such as live broadcasting of events.