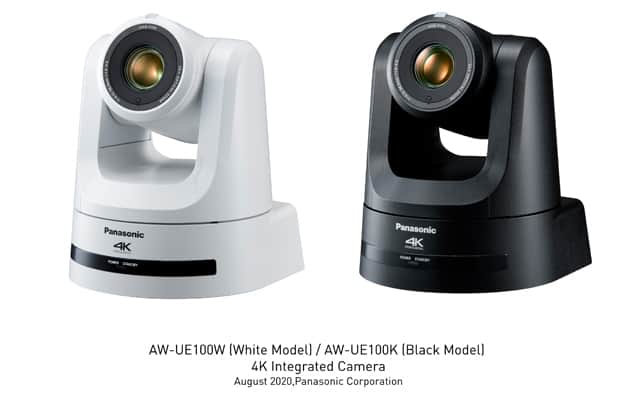 Panasonic has released the new 4K Integrated Camera AW-UE100W/K, a compact camera equipped with a range of functions that include 4K 60p/50p shooting and 12G-SDI output.

The camera supports a range of video transmission protocols, such as high-bandwidth NDI, which allows low latency transmission of high-quality live video over a single LAN cable, and SRT, which has strong security suitable for unstable network environments. It also supports next-generation video production such as shooting for live video distribution. In addition, support for FreeD, which can connect to an AR/VR system without the use of an encoder, makes virtual studio shooting possible.

12G-SDI, 3G-SDI, HDMI and IP output terminals are also included, enabling output in various formats, such as 4K 60p/50p. This allows for system construction and operation in a wide range of situations.

In addition, the rotating section of the camera is equipped with a newly-developed precision Direct Drive motor for improved operability, responsiveness and quietness during pan and tilt operations.

The AW-UE100W/K is suitable for a wide range of production environments, from live video distribution of events to shooting studio programs.