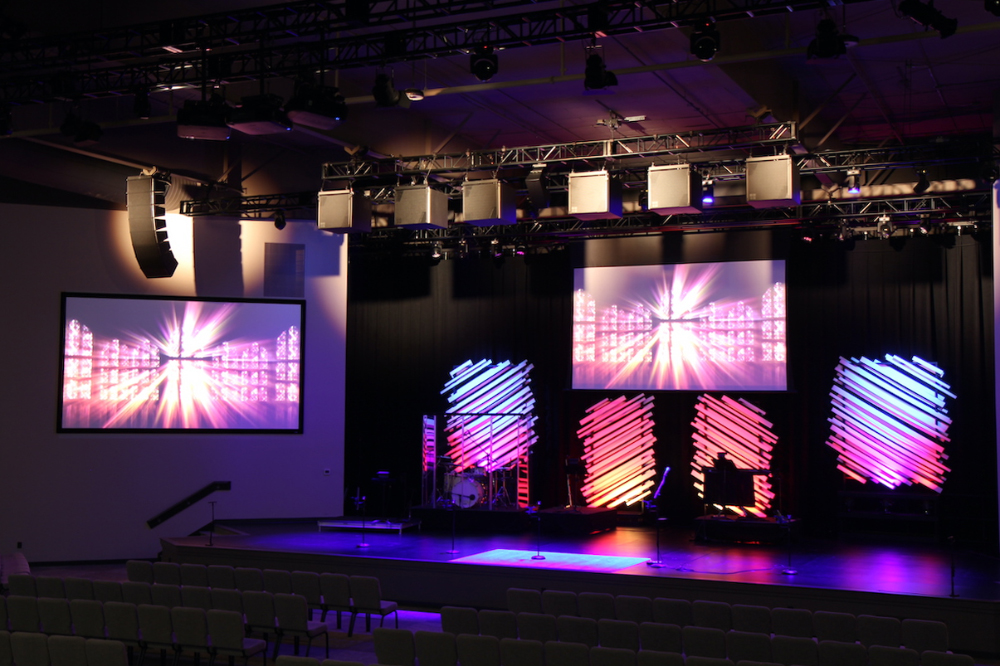 During the planning stages of the project, the architectural design was completed by RLPS Architectural Firm (Lancaster, PA), with Next Level Productions (Elizabethtown, PA) tasked with fulfilling the church’s requirements for sound reinforcement, stage lighting, and projection. Next Level Productions owner Darryl Wenger suggested a front of house system with Y-Series loudspeakers and a V-SUB array.

“The Y-Series fit the SPL requirements and budget requirements, with a shorter hang that does not impede the line of sight with the projection screens while viewing from the raked seating,” states Wenger. “We chose the V-SUB array over the Y-SUB to allow for additional SPL and lower frequencies. d&b does an excellent job of accurate reinforcement of both spoken word and contemporary worship music.”

Y-Series line array modules have a 2-way passive design with two 8-inch drivers in a dipole arrangement and a centrally mounted 1.4-inch compression driver with a wave transformer in either 80 or 120 degrees. Meanwhile, V-SUB cardioid subwoofers can operate with two cabinets on a single amplifier channel, making it an efficient choice combined with the benefits of the cardioid pattern.

“Initially the church hired an Architectural Acoustic Study by Custom Sound Design (CSD), using the preliminary architectural design to recommend design ideas and acoustic treatment plans to provide good acoustics in the worship space,” explains Ken Martin, Pastor of Worship Technology & Care at the church. “Consideration was given to shape, size, and surface materials in the sanctuary with raked seating and lots of hard surfaces. The goal was to start with an acoustically balanced space, and I am so thankful that we achieved this goal.”

Wenger adds that a primary goal was providing controlled audio output within the space: “Choosing the d&b Y-Series loudspeaker system and implementing acoustical treatment recommendations allowed for the ideal integration project. Pastor Martin was set on choosing d&b from the start after visiting many locations, listening to many systems, and noting the d&b audio difference.”

Martin notes that he was intrigued by the final phases of the installation work, with system tuning done and finalized with ArrayProcessing. “The ArrayProcessing maximized the system’s coverage in the space; what started as good concluded with great sound, providing even dispersion for every seat,” he says.

The specific main system configuration consists of left/right arrays of four Yi8 modules over four Yi12s, a single Y10P point source for center fill, the Vi-SUBS in an array, and audio power supplied by d&b 10D and 30D installation amplifiers. The stage is also equipped with d&b M2 monitors.

“The end result is a space where acoustics are complimentary to corporate worship and a d&b loudspeaker system that delivers clear and even dispersion for the lead worshippers sound and pastor’s messages to every seat,” Wenger concludes.