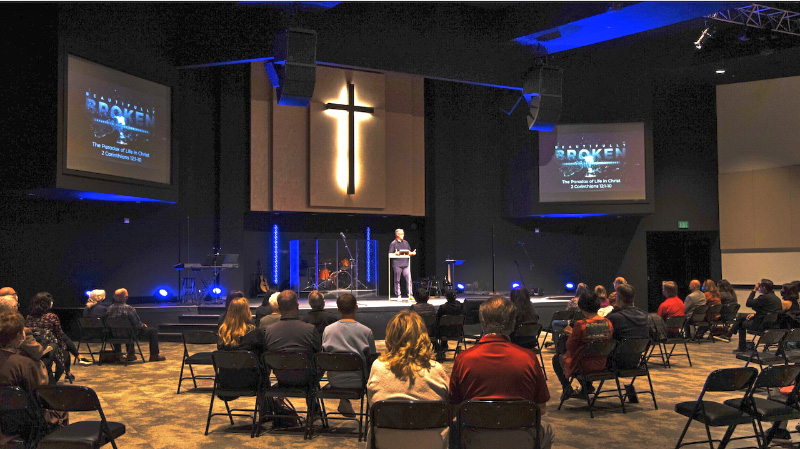 It might be scaled back to 150 worshippers right now due to pandemic restrictions, but that didn’t stop the 700-seat Central Peninsula Church in Foster City, CA from implementing a new sanctuary sound reinforcement system. The upgrade included new d&b audiotechnik A-Series loudspeakers recently deployed by system integration firm PCD Audio/Video of Santa Rosa.

The church’s main performance criteria for the new system were increased intelligibility, fidelity and impact, along with greater gain before feedback and improved audience sightlines. The A-Series configuration that was chosen is in a vertical deployment underneath subwoofers. This was a critical decision because the church didn’t want anything on the ground or on the stage.

What the Upgrade Included

A-Series is a new category of loudspeakers from d&b, the augmented array. It’s designed to address the needs of mid-size applications where a point source approach may not provide adequate coverage or SPL while a line array may exceed architectural and/or budgetary constraints. The new A-Series rig, along with d&b 10S loudspeakers supplying out fill, are able to cover the entire space with no front fills or subs on the ground.

Meanwhile, d&b ArrayProcessing was used to more evenly spread the energy distribution and tonal balance from front to rear. This was to provide a consistent listening experience for the entire congregation regardless of where they are seated. Cardioid Vi-SUBs are flown with A-Series boxes mounted underneath to provide a more compact and clean visual aesthetic. Due to the pandemic, the system was commissioned remotely by d&b in partnership with PCD.

Why They Chose This System

“The church is fairly contemporary in nature with a band that would include drums, bass, acoustic and electric guitars, a keyboard, and two to four vocalists,” states Tim Belleson, Technical Director, Central Peninsula Church. “The decision to install the A-Series was that the system is compact by nature; definitely a great selling point for us. Working with our integrator PCD, we explored several different companies and solutions. The final decision that sold me on the A-Series system was ArrayProcessing and how even the coverage is while still maintaining its modest form factor.”

Belleson adds that John Rudolph, Vice President at PCD, provided configuration options and worked diligently with the church to determine the final configuration. “John spoke extremely highly of the accuracy of the modeling,” he adds, “and though I had not heard the A-Series before this, I have heard a few other d&b loudspeaker systems and always enjoyed the sound of them.”

What Everyone Thinks Now

“Tim was referred to us from a previous client that had taken advantage of the AVaaS options that we offer to our clients when they want to get an outstanding package of equipment without the impact of capital expense,” states Rudolph. “After reviewing the plans and making site visits, we worked with d&b audiotechnik representatives Matt Collins and Mark Rush to create a virtual model of the space and predict the coverage pattern and frequency response expected in the space when done. After getting approvals and working with Tim and his staff to install the system, the results were absolutely ‘spot on,’ accurate as predicted with the ArrayCalc modeling software. We were so thrilled to see the results and so was the staff at the church! Wonderful job by the team at d&b audiotechnik and a wonderful client that appreciates the difference a world-class speaker system can impact on a venue.”

Belleson adds that church services were online for more than a year when Covid guidelines were put in effect except for a few, small outdoor gatherings, but returned to the sanctuary in late March of this year. “If you compare our services from before the pandemic until now, the biggest difference is all of our safety precautions,” he says. “We require everyone in attendance to wear a face mask and maintain six feet physical distancing between families. We have also had to shorten our services to give us time to sanitize in between each service. Now for the service program itself, we are trying to get it as close as we can to what it was before the pandemic without being unsafe. This mostly means we’re keeping the same elements, but just fewer of them. We’re singing four songs instead of five or six, and have asked for sermons to be about five minutes less.”