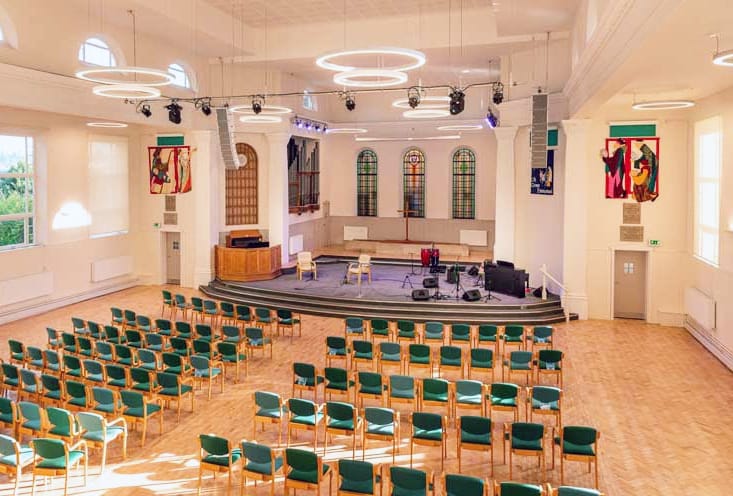 The system was specified and installed by Adlib after the company successfully bid for the full audio-visual contract, including lighting and projection, after the previous system had reached end of life. “The process started back in October 2017 and we’ve been through several iterations along the way,” adds Tim Robinson of Adlib.

The quotation the company provided exceeded the remit for performance. It also met the budget as well as a requirement for a discreet system with loudspeakers finished in white. “The HDL 26-A has provided the church with the best outcome available,” Robinson states. “The acoustic modeling in EASE Focus showed that we could achieve incredibly even SPL and consistent tonal balance throughout the audience, whilst maximizing gain before feedback on stage. The availability of the system in white was key to accommodating a system of this size with the interior design.”

Each of the two hangs comprises seven HDL 26-A elements integrated with a pair of flyable HDL 35-AS 15-inch subwoofers. Despite the loudspeakers being self-powered, there were no practical weight constraints. “Even though they’re self-powered, the HDL 26-A system is still lighter than some externally-powered competitors,” Robinson notes. “The structural engineer had confirmed that there was plenty of capacity in the roof, thanks to the PA being sited directly under a massive concrete beam, so installation with RCF’s flying hardware was ideal.”

One design criterion was that all LF elements should be flown. “The compatibility between the HDL 35-AS and HDL 26-A made that an easy decision,” he says. “For practical reasons, it keeps the floor clear and all items out of harm’s way; and for acoustic reasons it maximises the efficiency and coherence of the arrays and meant we would not be murdering the front rows with sub.”

He adds that RCF’s proprietary RDNet control protocol brings added value to the system. “The granularity of control afforded by individual amplification and FIR processing in every box is marvelous and really helps deliver tonal consistency throughout the whole audience area.” RDNet Measure, the 4-input, dual-channel FFT measurement system included in the latest version of RDNet, is a further bonus, he says.

Adlib also included six RCF HD 10-A active two-way monitors for the stage. An additional pair of RCF MR 50 loudspeakers are installed in the foyer, driven from the matrix on the house console so that it can be run independently.