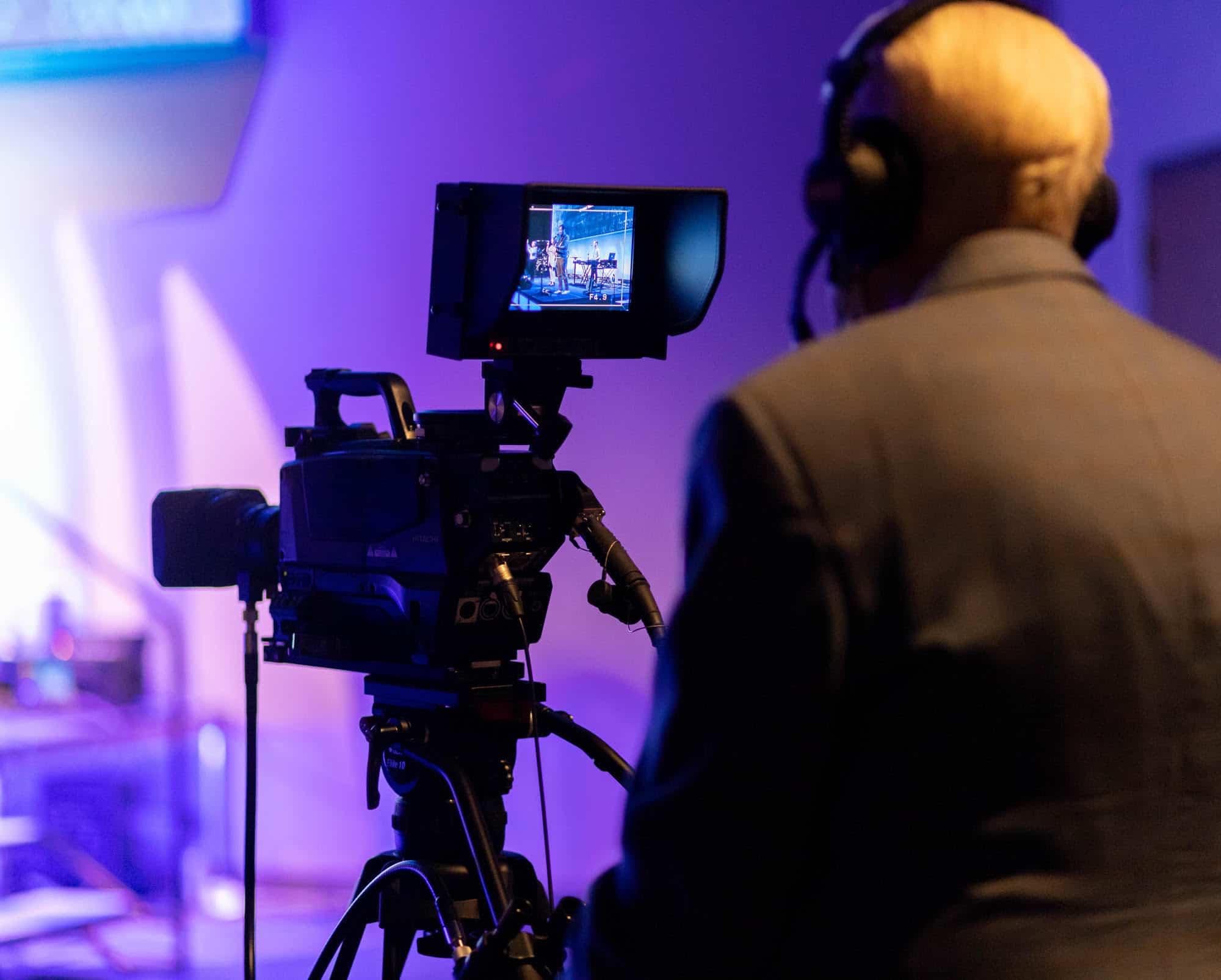 Immanuel Baptist Church of Little Rock, Arkansas, designed its new on-campus City Center for hosting community and local corporate activities. In the process, it purchased three SK-HD1800 cameras from Hitachi Kokusai Electric America, Ltd. This enabled premium-caliber, in-house video production capabilities. The visual quality of the Hitachi cameras has shone even brighter during the COVID-19 pandemic. The church’s live streaming and IMAG has been elevated as it moved services from its primary church building to the new City Center auditorium.

Founded in 1892, Immanuel Baptist’s vision is to be a gospel advancing church, for the gospel, for the city and for the world. They developed the City Center in a massively renovated former grocery supermarket on the same campus as the main church building. It was created for use by community organizations and companies for conferences, training seminars, and special events.

The church has placed a high priority on video ever since it became one of the first to broadcast its worship services live on television in the mid-1970’s. They considered it similarly important for the new venue. “We wanted to have a high-quality production entity in the City Center so that anyone using the facility would feel comfortable that they’re getting top-notch IMAG and live streaming capabilities,” said Phillip Ashworth, the church’s director of communications. “The cameras play a key role in making sure we achieve the level of quality we want, so even though we had a different vendor’s cameras already in our main worship center, we wanted to see if we could do even better here.”

Church staff evaluated cameras from multiple manufacturers at the NAB Show. They decided the SK-HD1800 was their best option. “It had better overall image quality, and I was pleasantly surprised by its affordability,” said Ashworth. “I have always loved Hitachi cameras, but when we did our main worship center years ago, our tight budget didn’t allow that class of camera. I was thrilled to find out the SK-HD1800 fit our budget.”

The SK-HD1800’s advanced global shutter technology was also a key factor in the church’s selection. “We were evaluating various LED video walls and looking at different vendors’ cameras shooting with them in the frame, and saw artifact issues such as flickering,” explained Ashworth. “We put the Hitachi camera on the video walls, and it eliminated that problem for us.”

Supplied by systems integrator Edgemont AVL, the SK-HD1800s are deployed in fixed positions. They’re also located on a recently-added track dolly in the City Center’s 850-seat (pre-COVID) auditorium. The camera feeds drive IMAG on the room’s 32-foot by 10-foot Primeview video wall and live streaming through a Teradek Trax encoder. They can also be called up in multiple rooms in the City Center and main building through a fiber network.

Praise for the New Cameras

Ashworth lauds the image fidelity produced by the SK-HD1800s. It’s noticeably better than the camera systems used in the church’s main sanctuary. “The thing that jumped out to me right off the bat was the clarity of the image,” he said. “It was a sharper, better-looking picture overall. The colors are also truer, and flesh tones look a lot more realistic to me.”

The SK-HD1800’s handling of low-light conditions also earned Ashworth’s admiration. He also appreciates its volunteer-friendly ease of use. “Being able to run the cameras in low light without having to bump the gain, yet the noise being basically non-existent, is a big difference from what we were used to,” he said. “Our volunteers also love the SK-HD1800s, as they find them smoother to operate and like the viewfinders better than our other cameras.”

The City Center opened in February 2020. However, the quality improvement enabled by the SK-HD1800s came even further to the forefront quickly. The pandemic led Immanuel Baptist to relocate its worship services from its main sanctuary to the City Center for easier social distancing. “Now that we were using the Hitachi cameras for our worship services, we had immediate feedback from people watching our screens and streams that they noticed the quality gain,” Ashworth explained. “That was a particularly huge deal when we needed to jump to 100% online for several weeks. People were always thankful for our online stream, but we never had comments about the quality before. Now, people were commenting that ‘I don’t know what you did, but it sure looks better.’”

Vision for the Future

That improvement has led the church to discuss raising the quality of video productions in its main worship center once it reopens. When budget permits, Ashworth would like to replace its cameras with SK-HD1800s. In the meantime, the new Hitachi cameras continue to help the church better engage its followers through challenging times.

“I feel like having a strong video production element says a lot about the fact that we care about what we’re doing, and that we want it to be well-received,” concluded Ashworth. “The new Hitachi cameras have shown our membership and community that we are being good stewards of the money that we spend on production, and that we want to do it with excellence. They enabled us to up our game, and people noticed.”