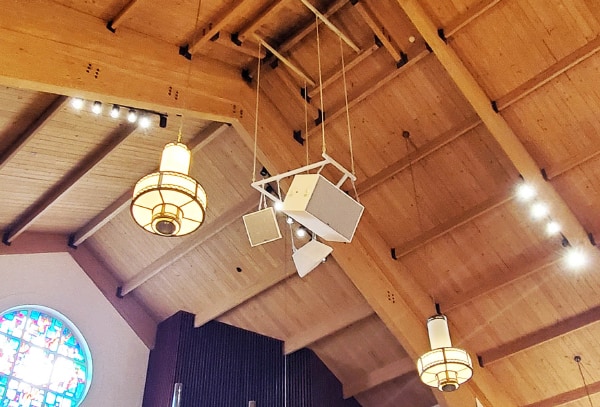 The fan-shaped room, which opened in 1998, seats approximately 500 people, with the previous system dating back its opening. The church is on the campus of Bridgewater College, a facility that earlier in 2020 received an upgrade utilizing Danley a chapel, which in turn led to RTW Media being brought in on the sanctary project.

“Bridgewater Church of the Brethren has a stunningly beautiful sanctuary with a 65-foot ceiling at its peak,” says RTW Media Logistics Manager Zack Guida. “They’re very into music and regularly bring notable Christian musicians in for services and concerts. However, their existing loudspeakers were only mid-grade when they went in over 20 years ago. They were flat sounding and threw energy all over the ceiling and walls. One driver was blown completely. However, every sound company they called to replace the old system would look way up at the existing cluster and say, ‘nope.’ Since they were positioned over the lip of the stage, there was no way to get up there except by scaffolding. We were the first company that would entertain the idea.”

He continues, “The walls are reflective and the room is pretty live. They wanted something that was custom-designed for the space, which we knew meant something that was really directional so that all the energy would be focused on the seats and the ears. Full-frequency, phase-coherent audio with impressive pattern control is Danley’s specialty. Because Danley offers so many choices for beam width, it was really just a matter of matching the right models to the specifics of their sanctuary.”

A Danley SH96 loudspeaker flown directly above the stage covers more than 70 percent of the seats with a 90 by 60-degree dispersion pattern. It uses eleven drivers coerced into phase coherence through a single horn using Tom Danley’s patented Synergy Horn technologies. A pair of Danley SM60F loudspeakers flank the SH96 to provide fill to either side.

Although the pandemic has prevented congregants from taking in the new system, the technical staff at Bridgewater Church of the Brethren have expressed their satisfaction with it. “It’s like they had a beater and now they’re driving a Ferrari,” Guida concludes. “The system has so much headroom and horsepower – it won’t break a sweat for a standard service. They’ve already run tests mic’ing instruments like flutes and brass that weren’t even reproducing through the old system. They soar through the Danleys! Things are so good that we’re already working on phase two. They’re considering Danley Nanos for choir monitors so that the church’s unusually-large choir can get the same Danley experience.”