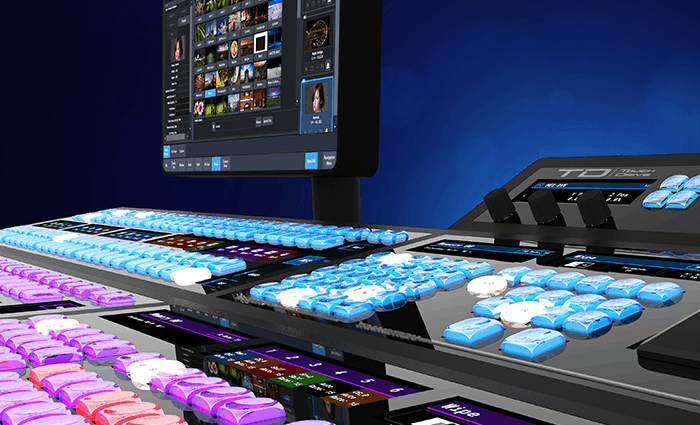 Ross Video has formally announced the launch of TouchDrive, the latest update to its Carbonite range of production switcher panels.

TouchDrive is a new family of control panels that has been designed with the Technical Director in mind, intended to reinvigorate the relationship between the TD and production switcher. It brings the same touch technology from the world of smart phones to video production switchers, even gestures.

Every display on the control panel is touch enabled to bring them to the fingertips of the Technical Director. These high-resolution displays, based on IPS LCD technology rather than monochromatic OLEDs, make source and device control faster and enable functions like bus map creation without having to dive into menus.

The new curved panel design puts every button within easier reach. The number of tactile buttons has been increased and the custom color schemes are designed to enable TDs to configure and organize the panel look to their specific preference.

TouchDrive also includes a built-in DashBoard computer to foster integrated DashBoard control for various Ross products (e.g., XPression graphics, Ultrix routing, Tria replay and many more) and offers power/display/control connections for an additional external display. Available in five different sizes, from a single row 15 button panel to a 3-row 25 button panel, TouchDrive replaces all current Carbonite Black models except for the compact Carbonite Black Solo. Pricing is on a par with to the outgoing Carbonite Black models, and first shipments are expected later this month.

“We spent the last year talking to TDs from around the world, and the feedback was extremely consistent – TDs have asked us for more freedom to create, greater operational efficiency and improved integration of production control,” states Nigel Spratling, VP of Switchers at Ross. “We’ve taken all of that input onboard and we’re very pleased to offer TouchDrive as our solution – the new curved panel design, redesigned GUI and touch/ gesture features really take production switcher design into a whole new space, and the initial feedback from our beta-test customers has been amazing. Carbonite has been the world’s best-selling production switcher family for many years with good reason – we’re very proud to introduce TouchDrive as the latest innovation, and we know TDs are going to love using it.”

Go here for more information on the new TouchDrive Series.