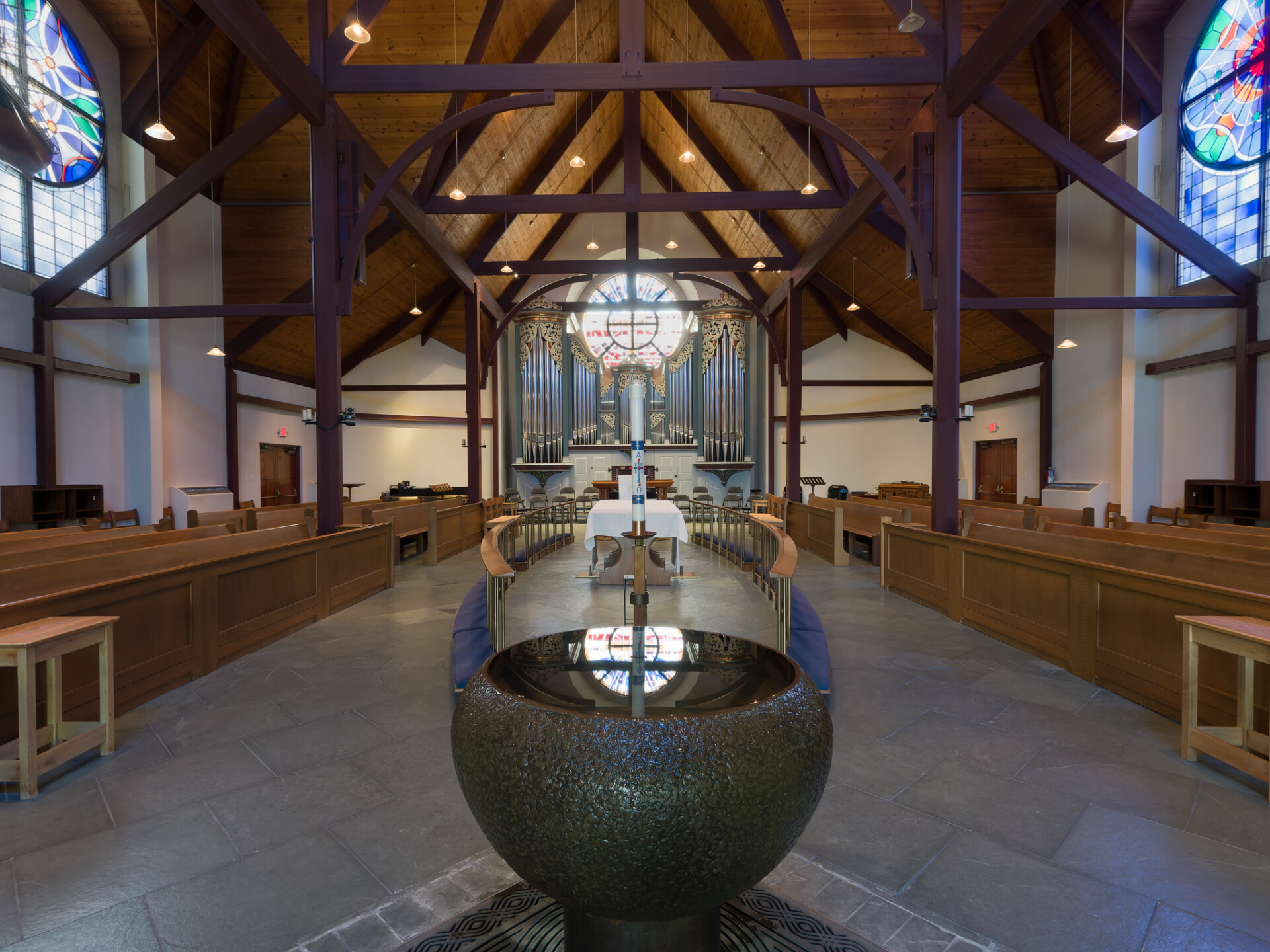 Christ the King Lutheran Church, known as “The Music Church” by locals, has been a small but significant presence in southwest Houston, TX since 1944. With an appreciation of history, tradition, and classical, faithful music, the church was recently faced with a dilemma. Leadership was focused on an audio upgrade they knew was necessary to improve the quality of spoken word for services, but they were concerned about the impact that any new loudspeakers would have on music reproduction as well as the visual of the nave. It was a quest that ultimately led them to an approach incorporating Renkus-Heinz digitally steerable loudspeakers.

“I’ve worked with many houses of worship,” says Michael Austin, president of Native Media, the Renkus-Heinz sales representative for Texas and other states in the region. “But this church, acoustically speaking for musical applications, is stunningly gorgeous to the ear. I’ve never heard any nave or sanctuary that sounded better for music, but when it came to the spoken word, there were big acoustic challenges – people couldn’t understand what was being said just eight feet in front of them.”

The modest nave provides seating for about 300 in a setting of sharply angled hardwood ceilings, stone floors, a complement of stained-glass windows, and a large pipe organ within the rear wall. The space isn’t a typical design; it’s an in-the-round layout, with the altar and services taking place in the center of the nave.

BUILT FOR BACH
Over the years, the church has invested significantly in music. The pipe organ was designed by the legendary Fritz Noack in
the spirit of instruments cherished by Johann Sebastian Bach. The church also has a Bach-favorite, 1719-style harpsichord, and two top-quality grand pianos, a Blüthner and a Bösendorfer. With such a musical foundation, the Bach Society at Christ
the King Lutheran Church was founded in 1982 as an interest group within the congregation.

“The liturgy we provide on Sundays is a traditional Lutheran Eucharist with vested clergy, fully robed choir, featured vocalists, and accompanying live music tailored to each service – we even use incense on special Holy days,” explains Rachel McWhirter, who serves as the church’s director of digital ministry and media producer for the Bach Society. “Our church is one of only two Lutheran churches in the Houston area that specialize in this liturgy style. Our congregation has been preserving the history and integrity of the liturgy and the worship space, and people were nervous about adding a sound system. The congregation was asking, ‘Are we going to change our tradition for the sake of technological advancement?’”

Faced with the challenge to improve the audio quality and intelligibility of the spoken word within the nave, the church began a system upgrade project with strict guidelines: a discreet system that provided high intelligibility without compromising live music or aesthetics. It had to be as visually discreet as possible to preserve the architecture and history of the space, yet provide enough audio control to accommodate the in-the-round configuration.

“When the church contacted us to help design and install their new system, we immediately thought of Renkus-Heinz, so
I reached out to Michael at Native Media, for his advice,” says Danny Elizondo, project manager for integration firm Conference Technologies Inc. (CTI). “This was a unique project and we had to make sure we had the best sound solution possible.”

After evaluating the space, the CTI team worked with Austin to set up a temporary Renkus-Heinz Iconyx loudspeaker to demonstrate the system’s beam steering capabilities. The technology would allow the church to focus the spoken-word audio where it needed to be – on the congregation – while avoiding unwanted reflections from walls, ceilings, floors or other architectural features.

“We set up the demo system, dialed in the beam steering to fire over the in-the-round altar space to cross over and cover
the pews on the opposite sides,” Austin notes. “We usually don’t want to do this because the pastors are walking around with
wireless microphones, so it’s an invitation for feedback. But with the beam steering, we were able to position the acoustic center over the presenter area to avoid any trouble and perfectly cover the congregation with intelligible audio. We left the temporary system in place for a few months and everyone was elated and ready to move forward for the permanent install.”

Ultimately, the team opted for a set of four ICLive X modules in stacked ICLXL/ICLLX pairs mounted on vertical wooden beams that rise in the center and sides of the nave. The placement allows the sound to be directed over the worship space in the center of the room to cover the pews on each side of the nave. Further back, toward the Bach organ and the far end, f ourDC12/2 column loudspeakers are mounted on columns to deliver the spoken word to the choir and overflow seating. All
loudspeakers are factory color-matched to blend in with their surroundings.

“Now, for the first time, our entire congregation can easily understand our pastors without sacrificing aesthetics or natural
acoustics required for the organ,” states McWhirter.

When the presiding bishop visited the church late last year, she expressed high praise for the sound quality and discreet
appearance within the worship space. Since the installation, the congregation has shown interest in upgrading the audio
systems to Renkus-Heinz in additional parts of the church, including at its Christ the King west campus.

“It’s interesting to note that the pedal tower of our Bach organ has a Latin inscription from Psalm 100 that perfectly captures our church’s spirit: ‘Jubilate Deo omnis terra, servite Dominum’,” McWhirter concludes. “In Latin it translates as ‘Make a joyful noise unto the Lord, all ye lands. Serve the Lord with gladness’ and Renkus-Heinz is allowing us to do exactly that.”