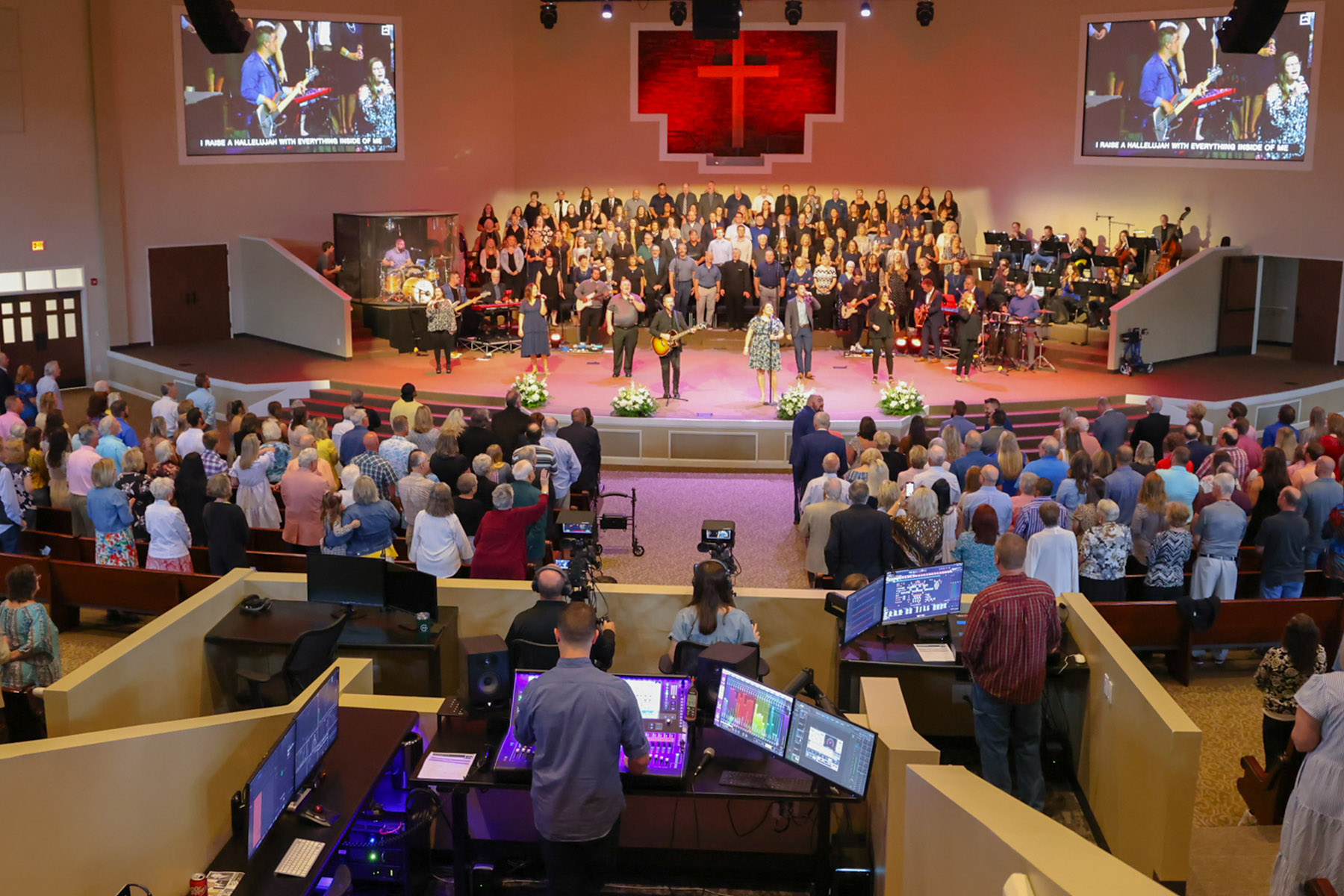 Glen Haven Baptist Church, just south of Atlanta in McDonough, Georgia, celebrated a milestone this year when the church turned 75 years old. Like more and more older churches, Glen Haven Baptist spent its diamond anniversary looking into the future. In this case, the church saw and installed a new KLANG:konductor, the most powerful and versatile immersive in-ear mixing processor ever, capable of delivering up to 16 immersive mixes and processing 128 input signals at up to 96 kHz with an astonishing internal latency of less than 0.25 ms.

That’s the kind of power that Glen Haven Baptist needed, with between 18 and 20 musicians onstage playing for its 100-voice choir. The new KLANG:konductor, purchased through and installed by Clark Integrated Solutions earlier this year, is linked to the church’s Allen & Heath dLive C3500 front-of-house console, whose DM64 MixRack digital stagebox hosts a superMADI card, and which in turn interfaces with a pair of DiGiCo DMI-MADI-B cards. That signal flow is used to allow the input onstage to be converted to XLR for use with the church’s Shure PSM 900 in-ear monitors, then converted back to MADI for use with the KLANG:konductor. It’s a slightly complex workflow, but one with hugely positive and productive implications for the church’s audio staff and musicians.

“The superMADI card feeds our KLANG:konductor’s two DMI cards, then we’re sending all 128 channels from the console over the input lines, and then sending eight mixes back to the dLive and using the tie lines in the dLive to feed our in-ears via the DM64 outputs,” explains Glen Haven Baptist Church Director of Technical Ministries Brett Hill. “We’re using the KLANG:konductor for five or six of our core musicians currently, but plan to roll it out to more of them as time goes by and everyone becomes more familiar with its operation and benefits.”

Hill is already well-acquainted with the advantages of the KLANG:konductor; until it was installed, all monitor signals were routed through the FOH console, which had the added task of being the church’s broadcast-audio console. “Now, rehearsals and sound checks are much faster and effective, and the KLANG:konductor takes a lot of the pressure off of the mixing engineers and we can work with a smaller crew,” says Hill. “Also, once a musician moves onto the KLANG platform, they tend to stay there; once they experience the ability to place themselves in the mix onstage, they’re not going back to mono or stereo. The 3D space gives them a lot more clarity on their own sound and the sound of the other musicians. They’re also making fewer changes during rehearsals and performances when they’re using KLANG.”

Those benefits are also being felt by the church’s musical director, Harrison Smith. “I was pretty skeptical about it at first, but after about an hour with it, I can see why everyone loves it,” he says. One immediate benefit: Harrison says that as both the church’s MD and drummer, he was constantly fighting in his mixes with the critical click track on one hand and the vocals and reverb on the other. “With the KLANG:konductor, I can dial in everything exactly as I need to hear it,” he says. “Everything is where and how you want to hear it.”

Harrison says the church’s musicians and worship leaders have responded positively to the new platform. They applied it initially to the “core” band—bass, drums, and two guitars—and have been expanding its use ever since. “Once everyone gets set up on it, they’re good; they don’t need any extra help, and that’s really helped rehearsals become more productive,” he says.

In fact, just as KLANG:konductor has changed the culture at front of house, it’s done the same onstage. Previously, Harrison would have to act as a moderator between the monitor mixes at front of house and the stage, taking requests from musicians for a little more of this or that in their “cans” and communicating those to the FOH mixer.

“Now, I have the KLANG:app on an iPad in the drum enclosure,” he says. “If they need an adjustment in their mix that they can’t do themselves, I can handle that from my iPad. It’s one more way it’s taking the burden off of front of house, too.” And the way the KLANG platform works, the church didn’t have to change any of its onstage monitoring infrastructure—antennas, earbuds, and so on were the exact same the week after the KLANG:konductor was installed as they were the week before.