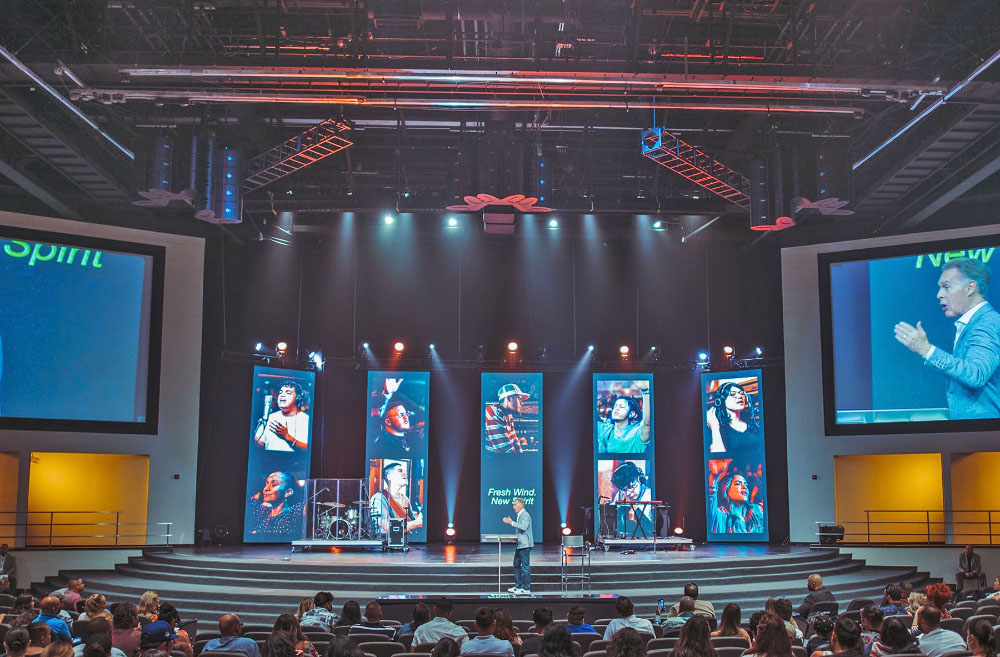 MGA and Abundant Church have a long working history, as they partnered together back in 2004-07 to design and install the original loudspeaker system for the then new AC-East facility. Ten years later, MGA was on the team to develop plans for a new “satellite” campus on the west side of El Paso that has an 1,800-seat main auditorium.

The Abundant Church leadership wanted to “raise the bar” for this project, so MGA presented an option to employ ADAPTive technology in a left-center-right system where each of the three arrays individually cover the entire fan-shaped seating area. “The unique ability of ADAPTive to be hung straight to smoothly cover wide seating areas, plus its stellar sonic performance made it a no brainer for the church to choose this product,” says Garrison. The final design for the West Campus (AC-West) consisted of 26 [Anya] main modules and 8 Otto subwoofers; it was commissioned in May 2017.

“I’m impressed with this system’s imagery and coverage throughout the room – it’s beyond anything I’ve heard in a live setting,” states John Buntyn, Abundant Church’s Audio Director. “The system’s ability to respond to minute adjustments makes it a joy to mix on. I appreciate that the mix from front of house translates throughout the room for the congregation’s listening experience.”

After hearing the performance of AC-West’s system, the church asked MGA to design a replacement system for its 14-year-old AC-East system. This larger room required the coverage and added “horsepower” provided by the flagship Anya ADAPTive loudspeakers, also accompanied by Otto subwoofers.

“The ideal lateral location and elevation for the outside Anya arrays (left and right) would interfere with the existing video projector paths to the projection screens,” Garrison explains. “We designed an ‘Initial Installation’ with the left and right arrays four feet closer to the room’s centerline and all three main arrays one foot higher than they will be in the ‘Future Installation,’ once the projection screens are replaced with LED video panels.”

This design incorporates 29 Anya loudspeakers and eight Otto subwoofers, with the center main array including nine Anya modules and the eight subs, with 10 Anya modules for the left and right main arrays. MGA worked with the project structural engineer to accommodate a safe transition to the future deployment.

“The unique steerability afforded by the ADAPTive technology is substantially responsible for making it feasible to nicely manage coverage to the seating area for the initial loudspeaker locations,” Garrison adds. “Spatial imaging and sonic quality are great but will be even better when the loudspeakers get moved to their intended ‘future’ placement.”

MGA is also working with Abundant Church on a downtown El Paso theater renovation project that is currently in the works that will utilize EAW AC6 steerable column loudspeakers, the newest member of the ADAPTive line.

“We have a great working relationship with MGA and are very pleased with EAW’s technology, products and support services across the different venues where we have their products installed,” concludes Stephen Webb, Abundant Church’s Production Director. “When we started talking about the downtown theater project, we knew we wanted EAW ADAPTive. With MGA’s guidance we decided on EAW’s new AC6 speakers with Otto subs, as that would be the best fit for this smaller room.”