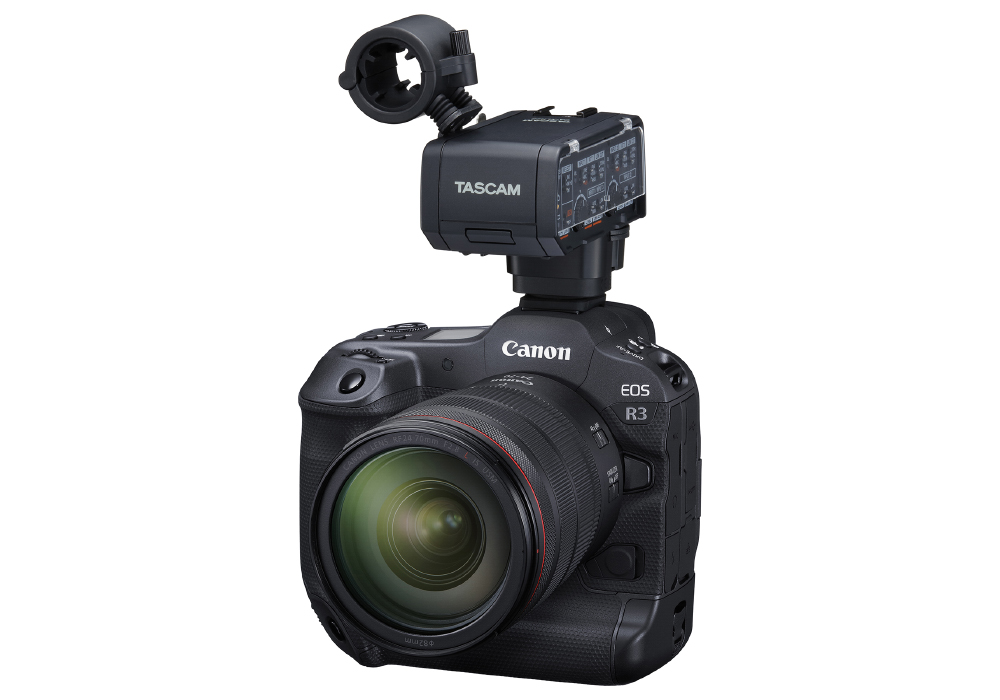 TEAC Corporation has announced the development of the new TASCAM CA-XLR2d XLR microphone adapter for mirrorless cameras, and it’s targeted for worldwide release by the end of 2021.

The CA-XLR2d lineup is a collaboration between TEAC Corporation working independently with Canon, FUJIFILM and Nikon. Since mirrorless cameras typically used for high-quality video shooting do not accommodate an XLR input for professional microphones or a high-quality preamplifier, there are very limited options to upgrade the audio quality within the capability of the camera itself.

Currently when XLR microphones are needed to capture audio, a digital audio recorder is required to capture it separately from the camera. However, extra time is needed to synchronize the audio and video manually when editing.

With the CA-XLR2d, audio from the XLR input is directly recorded into the camera along with the video. Further, with a digitized accessory shoe from Canon and hot shoe from Fujifilm, the built-in AD converter is designed to enable filmmakers to transfer clear digitalized audio directly into cameras without degradation.

CA-XLR2d is the perfect solution to meet the needs from professional users who demand the best audio quality to amateur users who are discovering a higher level of audio quality as part of video content.

Due to the co-design and evaluation of a digital hot shoe connection with Canon, compliant with its multi-function shoe, digital audio transmission directly into the camera and bus power supply from the camera is available for a cable-free system with high mobility. In addition, the CA-XLR2d is also planned to be compatible with the multi-function shoe of the Canon XF605 professional camcorder. This combination will provide a maximum of 4 XLR input cannels in addition to the built-in 2 XLR channels on the camcorder.

With the included 2 x AA battery box and cold shoe mount adapter, CA-XLR2d also works with existing cameras that don’t have the multi-function hot shoe by connecting an analog audio cable between CA-XLR2d’s analog out and camera’s mic-in.

With the included 2 x AA battery box and cold shoe mount adapter, CA-XLR2d also works with existing cameras which don’t have the digital hot shoe by connecting an analog audio cable between CA-XLR2d’s analog out and camera’s mic-in.