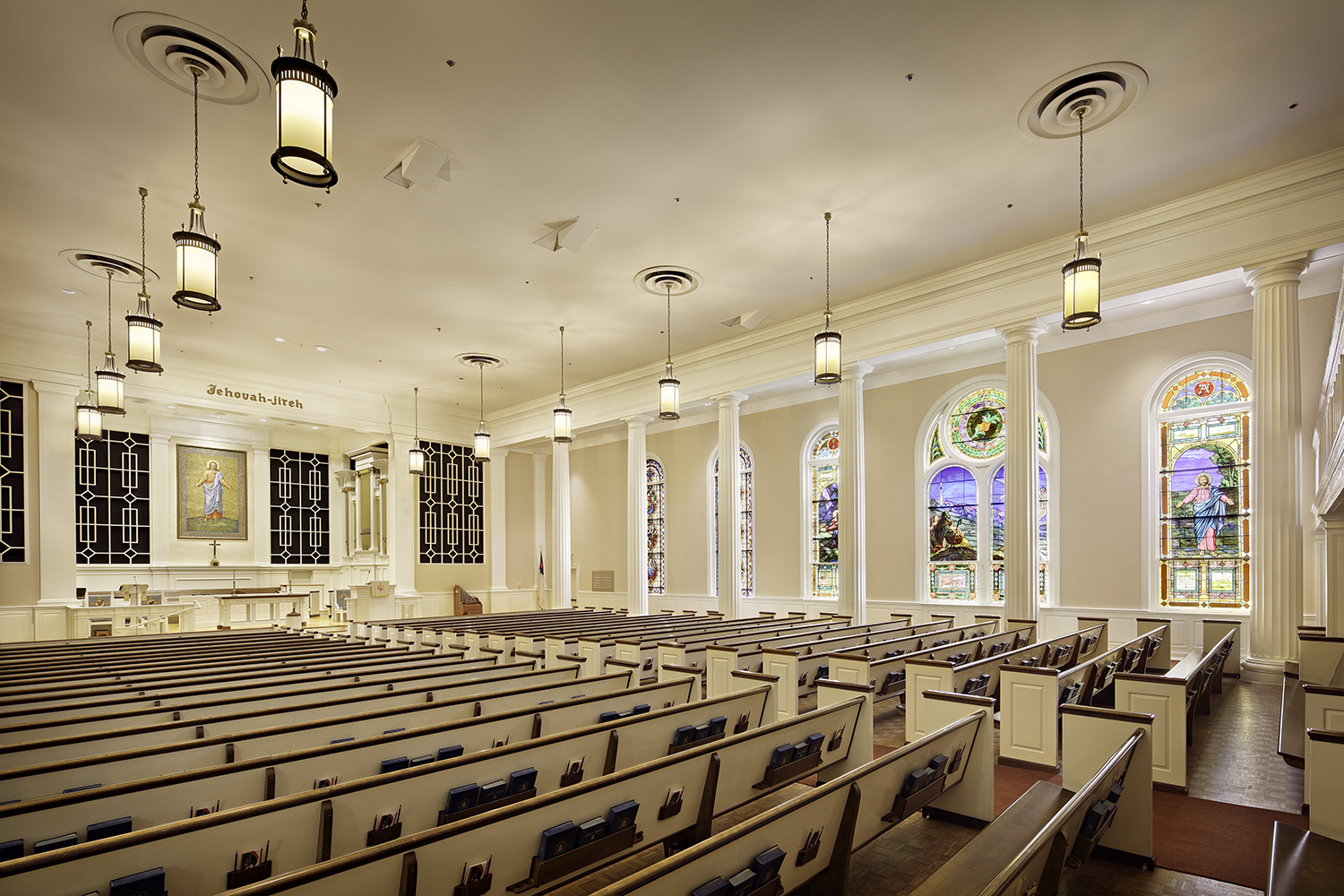 By Kellye Cooke, compiled by The Christman Company

Built in 1792 in the heart of Downtown Knoxville, TN, First Presbyterian Church was the city’s first church. The iconic and highly visible church takes up an entire city block and played a key role in Knoxville’s storied past. Painted above the altar is the saying “Jehovah-Jireh”, dating to when someone wrote those words in chalk after the church regained possession of the dirtied and damaged facility after the Civil War.

The oldest standing building on the church campus was built in 1903, with additions built in 1920, 1962, & 1988. Over the decades the additions and renovations resulted in limited connectivity within the interior of the building and a lack of ADA compliant exterior entrances and restrooms.

This project addressed these issues, which they hope will help the church to remain relevant for another century in downtown. Reverend Pender said, “We don’t want to build a museum or a monument,” rather they want to have a facility that adds to the life of the city. Worship there is traditional and, while he is pleased others may find what they seek in a contemporary service, the goal at First Presbyterian is to make a traditional service feel vital and current.

A major feature for the entire project was restoring the church’s architectural integrity and restoring historic features and treasures. Among those treasures the Christman team uncovered a stained-glass window dated from 1903 that was hidden from church members during prior renovations. The window was uncovered while working on a punched opening for a proposed door in the 1903 Sanctuary building. Fortunately the window was seen in time and through coordination with the design team, adjustments were made to leave the window in place and incorporate it into the new south side lobby.

Another discovery of the project was an open space in the center of the various portions of the building. This was ultimately used as the north-south corridor. It also yielded a pleasant surprise in the discovery of large granite curb, or wall pieces, which were unused and sitting in the hidden inner portion between buildings. Turns out the construction team needed more of these stones to make the new construction match the older construction.

In all, the project involved 65,000 square feet of renovated and new space. Renovations included work on all six floors of the church including the sanctuary, the chapel, multi-purposed classrooms, and administrative office areas. The new construction included a three-story atrium space utilized as a circulation spine for the existing facility, two new elevators, and stair tower and elevator expansion.

The challenging project required construction to take place while maintaining continued church operations. Temporary signage and walls were used throughout to provide a safe division between ongoing construction and the church congregation.

To accommodate the church’s needs and to keep the majority of the church and offices in operation, construction was divided into two phases. The phase 1 area was bound by State Street, Church Avenue and existing buildings, limiting site access for the duration of construction. Demolition and structural steel erection required temporary road closures or lane diversions to allow adequate room for material loading and unloading and equipment operation. Phase 1 also include upgrade of the electrical service and replacement of the chiller and major mechanical systems for the HVAC system, both of which required multiple shutdowns that had to be coordinated to minimize disruption to ongoing church operations.

Similar to Phase 1, access to the site during Phase II was limited and took place adjacent to the historic graveyard. Phase II included renovation of the sanctuary, administrative offices, the north side of the new atrium, and the stair tower expansion. The new atrium space spanned both phases running between existing buildings.  The proposed foundations for the atrium column foundations included helical piles. Foundation excavation in these areas uncovered unforeseen conditions such as foundations from old building, thick lifts of flowable fill, and stacked stone retaining walls. These unknown conditions resulted in foundation design revisions in both phases and resulted in increased durations to allow for design revisions and completion of foundation work.

First Presbyterian Church’s $10M renovation and addition project is another example of preserving the commitment and confidence so many feel for downtown Knoxville. Some may not think of churches as economic drivers of the city’s resurgence, but First Presbyterian is one church that made a major investment to demonstrate this commitment. This project reaches out beyond the church’s traditional ministries to be a part of making the City of Knoxville better. And they’ve been doing it for 224 years.