ORGANIZING PRINCIPLES OF DESIGN – Evolution of a Growing Church Community 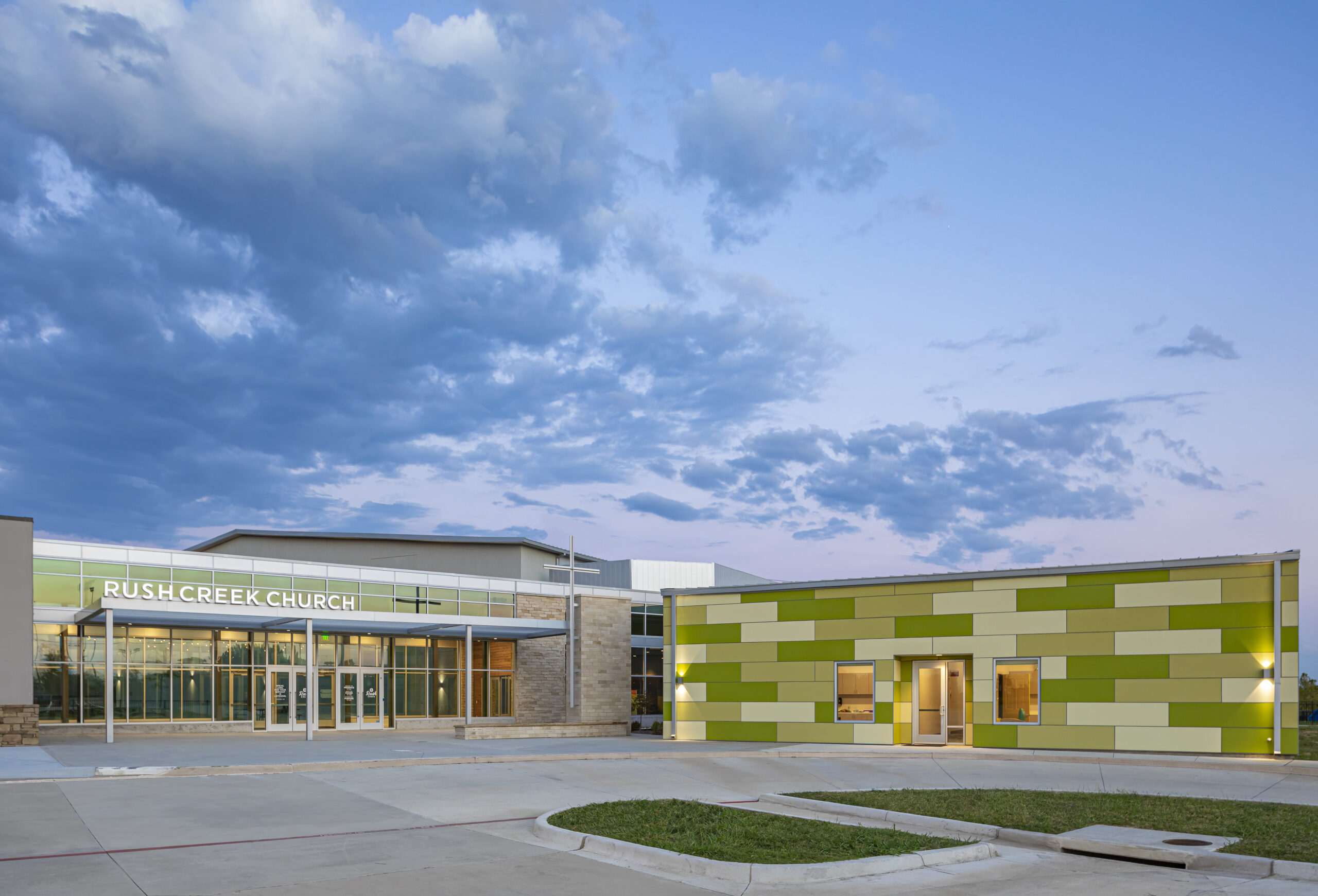 When Rush Creek Church came to GFF Architects in 2017, they were in the early stages of planning for facility enhancements on each of its three campuses.  From simple interior upgrades to full scale building additions, the church was experiencing increased attendance and required a comprehensive needs assessment to address how to best accommodate current needs and increased growth.

At the Rush Creek – Mira Lagos campus in Grand Prairie, Texas, they focused the next phase of building projects on expanding its Children’s and Youth ministries, a new Worship Center, and new indoor and outdoor Gathering spaces.  Like many fast-growing churches today, Rush Creek prioritized attracting young families and investing in its programs for the next generation.  Early in the design process, the GFF design team developed five primary organizing principles of design that allowed Rush Creek to address immediate needs and guide long term growth.

1.  Break Down the Scale of Parking

The Mira Lagos campus is sited on a little over 14 acres of land.  The existing building is located on the north end of the site, with parking on both its east and west sides.  The south end of the property consists of natural landscape featuring a pond and a looping nature trail.  “Parking, though necessary and appreciated, should never be a visual priority for a campus. Any opportunities to remediate the parking with enhanced hardscape as well as native plantings should be prioritized,” stated Loren Boynton, Project Designer for GFF.

New parking areas were separated from the existing parking area by new buildings and green spaces to alleviate a large expanse of paved area and break down the scale of the parking.  The goal of parking having a low impact on the site was further achieved by ensuring that parking islands and perimeter buffer zones at site boundaries included an abundance of landscaping.

Since suburban churches often have more land available to develop than urban churches, site planning strategies can often prioritize and enhance the connection of buildings to outdoor spaces and nature.  The design team arranged the new building on the site to emphasize and enhance the green space and create outdoor gathering areas.  The connection to nature from inside the new building is reinforced through large expanses of glass and views to the pond beyond.  “Given the proximity to Joe Pool Lake, a connection to the outdoors was a priority. Orientation of the commons space to the lake and tree line provided for the overall feeling of openness and connection to nature without the burden of parking lot views,” mentioned Boynton.

Outdoor spaces mingle between building elements and become usable space for the church, while reinforcing the church’s desire to connect with the surrounding community.  Patio areas, the children’s playground, and the nature trail are publicly accessible and available for anyone looking for a bit of relaxation and exercise away from home.

3.  Connection to Existing Structure/Transition from Old to New

To facilitate the flow of people during main worship times, and for security reasons, the connection of the new addition had to allow for an interior link to the existing building.  There were two important questions that GFF asked to develop a streamlined connection that fit within the other organizing principles of this project.  One, what new spaces were important to have in close proximity to the existing building; and two, should the new building appear seamless with the existing, or should stylistic differences be celebrated?

Since the long-term goal was for the existing building to be solely converted for use by the youth ministry, a new link was provided that physically and visually separated the new main worship space and children’s spaces respectively from the youth spaces.  According to Boynton, the link was originally imagined as an open-air connection to the existing building. “It was important that the new entry to the campus feel open and light filled.”  As the design evolved though, the importance of providing a sheltered connection grew, and the link became enclosed with glass.

The main entry to the building is located within the link which also provides direct access to an outdoor courtyard and a large indoor common gathering area.  The link also serves as a means to soften the stylistic differences that emerged from the design of the new building. While the material palette for the new building was drawn from materials on the existing building, the language developed for the new building is different. This allows the juxtaposition between old and new to be soft and complimentary.

The GFF design team created a common gathering area that functions as a centralized ‘hub’ space that provides direct access to the new main worship space and children’s classrooms.  The result was an intuitive layout of spaces with extremely simplified wayfinding graphics.  Open views to adjacent spaces simplified transition zones and allowed arrival and departure sequencing to run smoothly even with multiple entry and egress points.

GFF’s initial design included three new children’s classroom pods radiating from the central Commons Space and connected by a single glass corridor.  However, as Rush Creek’s priorities were refined throughout the design phase, it was decided that only one classroom pod would be built as part of the first phase of the project.  GFF understood early in the design process that phasing construction might be a possibility, so developing the building plan to allow for this was a key organizing principle.  The future pods can be constructed seamlessly by simply continuing the corridor that links all three of them together.  Until the future build-out occurs, the church can take full advantage of the open green space provided in their place.

The creation of these five organizing principles was not arbitrary, but rather they were derived by having a keen understanding of the church’s wishes and goals developed during the initial needs assessment.  These principles helped guide the design team from the initial planning phase through the completion of construction.  They allowed for the development of strategies that produced a successful building design and that can be used as a template for Rush Creek’s future building projects.