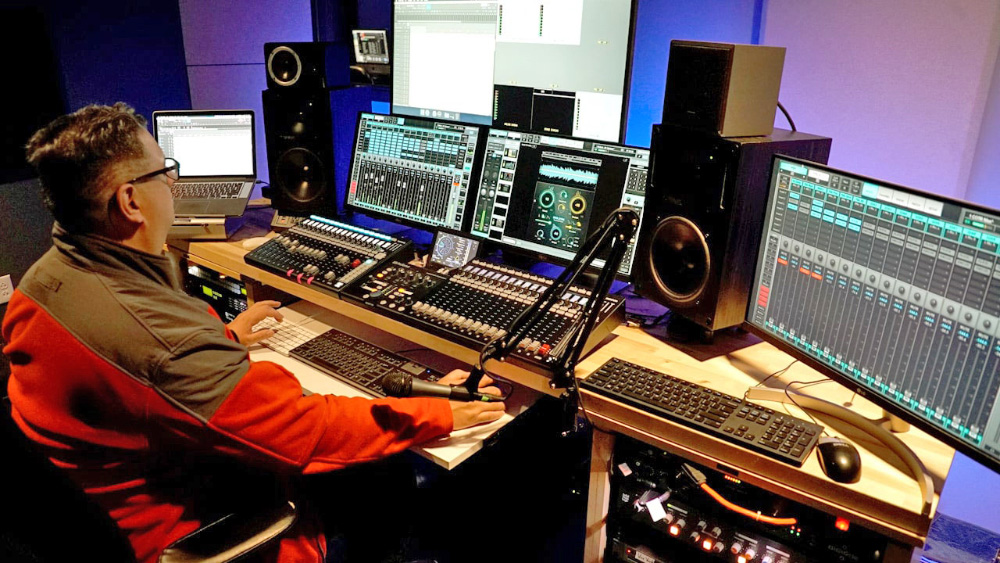 Church on the Rock in St. Peters, MO recently implemented a Waves eMotion LV1 live mixer for mixing and streaming its worship services.

Mixer, producer and audio consultant Yamil Martinez, who has served as front of house engineer for Luis Fonsi, Alex Campos and others, consulted with the church on the project. He states, “LV1 is based on integrated Waves plugins, so it helps me tailor the sound to any requirement in ways that most regular consoles can’t. Because Waves’ precision plugins are so accessible from within the mixer, eMotion LV1 enables us to achieve an extremely polished studio sound in a live situation. We’ve been able to accomplish processing chains that make miracles happen, especially when dealing with unwanted noise. To me, the LV1 is a chameleon-like console that I can personalize to achieve any coloring palette needed.”

He continues, “Our decision to adopt the LV1 was driven, first of all, by our need to improve the church’s online experience. Before the LV1, the church’s broadcast system was quite convoluted. It was based on a combination of groups and direct outputs from the AVID Venue D-Show console at front of house, plus a few direct analog splits that fed an analog Midas Heritage mixer. Drums were fed from a premix, as were the brass and half of the vocals. Lead vocals were received individually from a processed direct-out feed. Secondary sources, or less frequent sources that aren’t used day-to-day, derived from a split of a split, out of the main splitter. But the biggest drawback prior to adopting the LV1 was that not all the decisions made for the FOH mix translated properly in broadcast. This was both because of the physical sound of instruments in the auditorium, and because each of the church’s mix engineers or mix volunteers had different criteria. Just imagine all the inconsistencies that the former system had… This is why our big LV1 project was born.

“Our initial idea was to extract unprocessed individual audio channels from the FOH console to a dedicated TV mix in a single eMotion LV1 mixer. But we quickly discovered that interfacing with the existing consoles just wasn’t cost-effective, nor did it provide the flexibility needed or the necessary channel counts. Neither did we want to replace the analog splitter with another one with a third output, or to invest in connectivity for outdated consoles; these were not viable solutions. So, in the end, we simply replaced our Midas Pro digital console and monitors with an eMotion LV1 mixer and shared its inputs with broadcast. But that was just the start! Eventually, three high-end consoles got replaced with eMotion LV1 mixers: two Midas consoles, one analog and one digital, which reached their limits; and a Yamaha PM1D that was stuck in outdated technology. Those consoles had to be replaced because they couldn’t adapt to our new circumstances and needs.

“With the Waves eMotion LV1, we’re able to have full console control from different locations at the same time. This has been absolutely crucial to the church’s TV broadcast, 2D streaming and 360 VR operations. To provide a better online experience, Church on the Rock has content variations that include online hosts who interact with the online campus community and inform them of COTR’s wide variety of activities. Those hosts move around the facilities, depending on where the activities are being held. No matter where you are within Church on the Rock’s facilities, if there is a network connection, all you have to do is assign the specific port to the proper subnet to send and receive audio.”

“The compact DiGiGrid D interface moves all over both buildings, depending on where the TV hosts are placed,” he notes. “The latest addition to the system is a 3D immersive audio mixing system that complements a 360-video content destined to COTR VR campus. Virtual Reality is the best way to remotely be part of the COTR experience. This setup is wonderfully modular and expandable. As your audio needs evolve, the system can grow too. Our project is proof: we started with a single LV1 as a simple broadcast mixer, and evolved to an entire audio network that covers two multi-story buildings.”

The church doesn’t have a dedicated person for monitor mixing. Each musician controls their own mix wirelessly with an iPad running the Waves MyMon personal mixing app, which “communicates” with the LV1. “Having the MyMon app was indispensable in the selection of the LV1,” Martinez says. “The monitor LV1 can be fully mixed and cued from the stage, FOH and broadcast positions, with the latter two having absolute control over the monitor console. The more experienced FOH and broadcast engineers can assist musicians from their own position.

“The LV1/SoundGrid system allows us to have an elaborated internal communication system through a dedicated matrixing system that receives fifteen talkback/communication inputs and distributes to seven destinations throughout both buildings. Before the LV1, there was no way of getting completely rid of the sinful mono IEM mix. Now, every IEM mix is stereo. Any instrument can have its own stereo reverb without complicated routing or mixing procedures. Having the reverb as part of the channel signal flow keeps the proper relation between dry and wet at every monitor mix.”