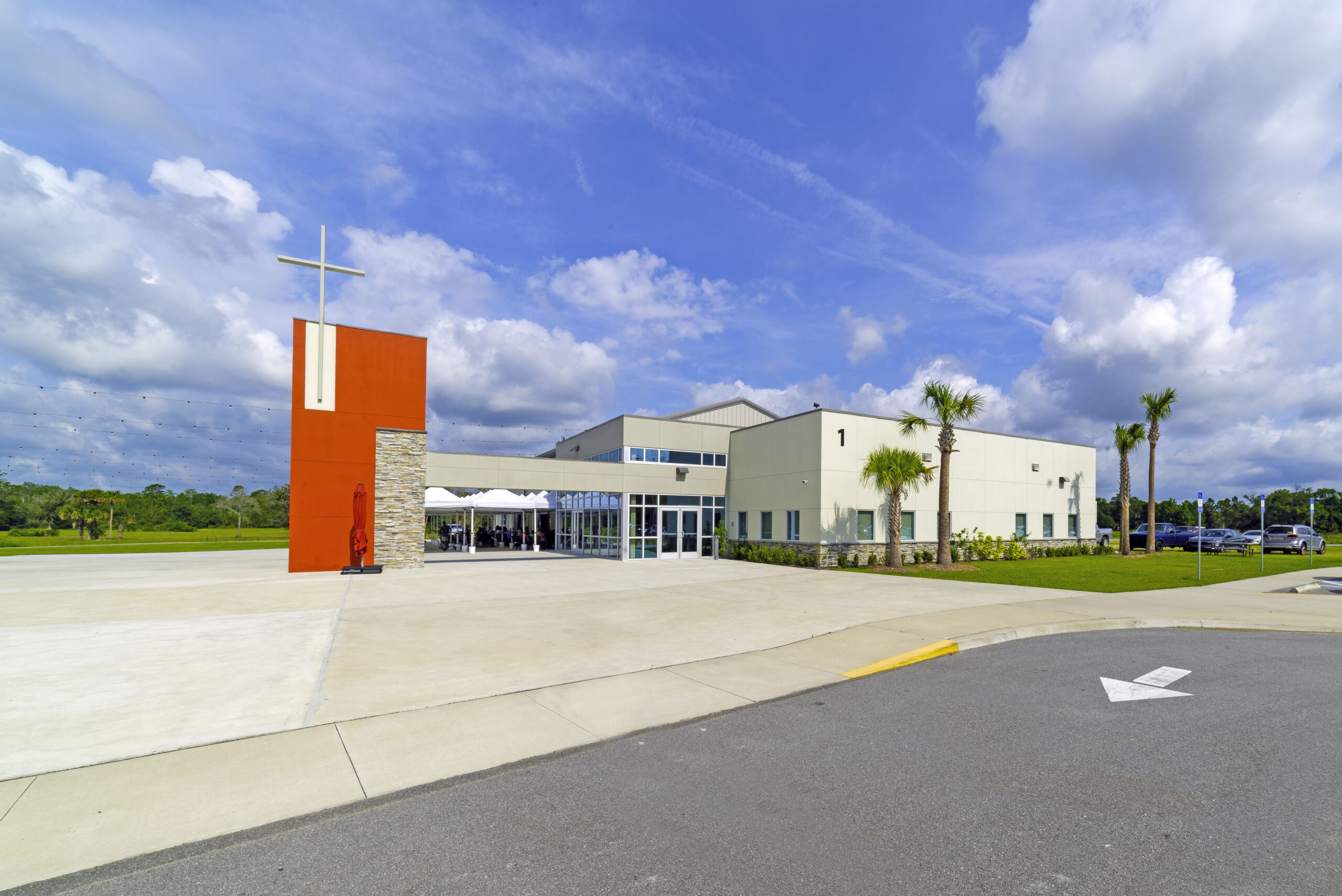 This is a church that has existed in Daytona Beach, Florida, since 1898. Daytona Beach has had a transient community since the church’s early days. Wealthy vacationers escaping the cold climate of their northern communities first established it as a popular holiday escape. In 1948, NASCAR sanctioned the first race of modified sports cars on the compact sand of Daytona Beach, helping to transition the area into the motorsports vacation hub we know it as today.

In 1998, exactly 100 years after FBC Daytona’s inception, the church began to undergo an overarching thematic shift: to remove all barriers keeping their community from reaching Christ. This case study will review that theme and focus specifically on how the church translated a spiritual goal into physical reality for their community.

The Problem: How to Remove Existing Barriers to Christ

While they had a long tradition of ministering to the local transient population, the growing number of long-term residents had needs that the church would have to evolve to meet. As a downtown location, the area was somewhat problematic for families regarding safety for children and for those driving in from the neighboring area to navigate. In addition, the building itself was not entirely comfortable and welcoming. As Les explained, “The church was very ornate, which immediately gave it a cloak of formality.”

The Pastor at that time developed a vision to purchase a vast amount of property west of Daytona. With megachurches still at their peak in 1998, this land was intended for relocation and building a megachurch to fit 5500 people and overcome the shortcomings of their downtown location. More than that, they envisioned a truly massive and modern center.

Downtown FBC Daytona Beach proceeded to purchase numerous parcels of land to the west with a lofty vision for its use. However, unclear on how to proceed and with a Pastoral change looming, this vision fell dormant. As they would later learn, the vision needed refinement.

The seed was planted, however, and it continued to germinate as the congregation faithfully gave to the project over the years. They navigated a long and cumbersome process of making the location accessible over delicate water systems and refurbishing a bridge crossing. Then, the 2008 Recession hit. Les recalls Congregant and City Manager of nearby Port Orange, Ken Parker, commenting at the time on what would have happened had the vision remained in motion: “We’d have been building in the recession, and God protected us.”

The Solution: A Church Without Walls

In 2010 as the recession began to fade, their new Pastor reignited the vision. Les Wilkinson was tasked with reassessing the property, updating permits for more immediate use, and newer building planning with their architect. Within a year, the church was ready to start creatively using the property: Saturday nights under the tent. They set up generators and a large tent for fun outdoor services out on the property. Those Saturday services became lovingly known as “Worship without Walls.”

What they could not have foreseen in 1998 is that years later this location would be 30 minutes from FIVE of the fastest-growing cities in the state of Florida. All their surrounding communities are residential areas. The property is located right off of two major highways: Interstates 95 and 14, connecting both sides of Florida. Worship without Walls on Saturday nights further proved how accessible this location was and that the freer atmosphere of the outdoors matched the needs of their family-oriented community more than the grand design of the original vision.

With a refined vision, FBC Daytona was now ready to embody the spiritual principle that had become their defining theme; a church without “walls’’ or barriers to reaching Christ.

In design development with their architect, David Shanks of Shanks Architects, the vision took form as two casual contemporary buildings on a campus with a park-like aesthetic. Rather than facing out to the parking lot, the buildings center around an outdoor communal space. To achieve the “worship without walls” concept, Building 1 has four large contemporary glass roll-up doors along the entire length of the side facing the outdoor courtyard. It is currently used as the worship center, and the glass roller doors allow them to lift their walls during services. Building 2 has a large commons area wrapped in glass, keeping a visual connection to the central outdoor area. In the future, they plan to add two more buildings that will also keep the outdoor central area as the focal point.

The Results: A Growing Environment for All

FBC Daytona Beach relocated to the new campus just over a year ago, and already, the busier morning service utilizes the roll-up doors for overflow into the outside area. Tents are set up along the open walls without any disconnect from the service. The outdoor tent seating has also come in handy in light of Covid concerns for anyone who would prefer to stay outdoors.

During the Covid shutdown, they only missed about two weeks of services. In an area on the property they call The Grove, due to a grove of oak trees and greenery, they hauled in hay and set up generators for spacious outdoor services. As they felt safe to do so, services eventually returned to the worship building. With their glass doors rolled up, everyone could space out inside or sit outside as needed with fresh air circulating throughout. It allowed them to remain open in every sense of the word.

The church has since engaged the community with continued creativity. For Christmas, they put on a fair with outdoor games, booths, and a hayride. Their choir performed from the worship building with its open walls facing the fair. Approximately 2500 people came to that. For Easter, they held family-style events outside that drew in about 1500-1800. They’ve been able to hold various camps offering kayaking, canoeing, and archery. Their recent Children’s Connect Camp saw 82 children and about 14 different families attend that are not part of their usual services.

Through embracing the outdoors and rolling up their walls, FBC Daytona has created an environment perfectly suited for their surrounding community: enabling them to remove barriers to Christ.