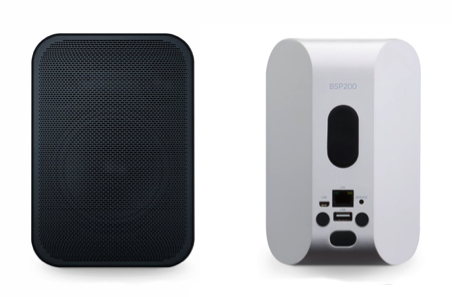 Bluesound Professional has announced the launch of the BSP200, a new network streaming loudspeaker offered in a choice of white or black matte finishes and providing one-wire PoE+ connection of both power and audio joined by BluOS app control.

The player in the BSP200 is based on the established BluOS platform and is capable of playing and distributing content from local network storage as well as from a number of streaming services, including some specifically designed for commercial use such as SoundMachine, Custom Channels, QSIC, SiriusXM Music for Business and internet radio stations.

In addition to stand-alone use, a pair of BSP200s can be used in stereo configuration. The loudspeakers can also be used in a larger BluOS system, allowing for grouping into user-definable groups of whatever size is required with other BSP200 units and/or any other connected Bluesound Professional players on the network.

Built-in DSP allows for equalization as well as other audio processing. Access to content is via Ethernet, while a USB input adds further capability of by providing replay of files stored on connected drives.

Control can be accomplished by any Windows or Mac computer as well as any iOS or Android phone or tablet and the Bluesound Professional CP100 wall mount controller. Third-party control is also possible with many leading systems. Security provisions are designed to prevent any unauthorized control of the system. An optional bracket allows for wall mounting with 40 degrees of swivel and 360 degrees of rotation.

“At Bluesound Professional, our focus is to combine exceptional sound quality with unique flexibility and convenience for both the installer and their customer,” says Graeme Harrison, Vice President and General Manager for Bluesound Professional. “Of course, reliability of the components as well as the BluOS operating system is also paramount, so the brand is all about testing and continuous improvement.”