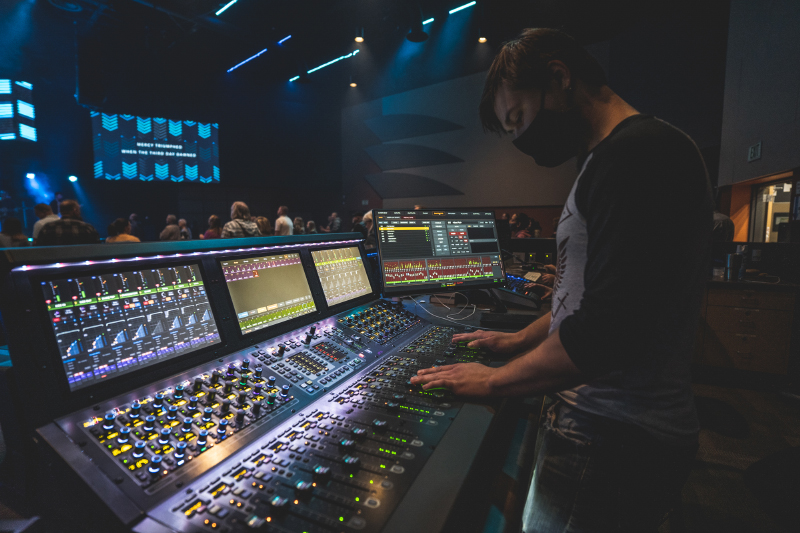 The VENUE | S6L, purchased via local AV provider Floodjay Productions, had to be implemented quickly when the church’s previous console ceased working. “I spent a couple of weeks working with the VENUE Standalone [software] offline editor to get it set up to what I needed it to do,” explains Geoffrey Fusco, Production Manager at Shelter Cove. “That way, when I got the console, I could just stick in a thumb-drive with the VENUE show file [on it] and be good to go.”

When the console did arrive, the installation was completed over the course of an evening, with Matt Robertson, owner of Floodjay Productions, assisting with the transition. “I think the last pieces came in on a Thursday and once it got there, we were like ‘Okay, do we want to start it before the weekend?’ and Geoff said ‘Yeah, let’s go!’… He really wanted to go for it, and we got it set up in a night,” Robertson says.

He also uses the feature to let others practice their skills. “Whenever my coworker wants to mix, I throw up a Pro Tools session and let her have at it.” The S6L’s integrated Pro Tools functionality is employed to record services, which are subsequently mixed, edited with the video recording, and posted online for the congregation to view on-demand.

Having been accustomed to the VENUE | Mix Rack System prior to the console change, Fusco and his team were able to jump right in when the S6L arrived. “I didn’t find anything to be confusing,” Fusco concludes. “Everything was relatively in the same spot and easy to use — it was great. Anyone who knows a little bit about mixing could jump on and figure things out and quickly get something going, especially if someone else has an event and I’m not there.”

One more piece of the puzzle is that musicians now have control over the mix of their monitors using the Avid VENUE | On-Stage app, as does Fusco, who doesn’t have to worry about providing monitor mixes anymore.