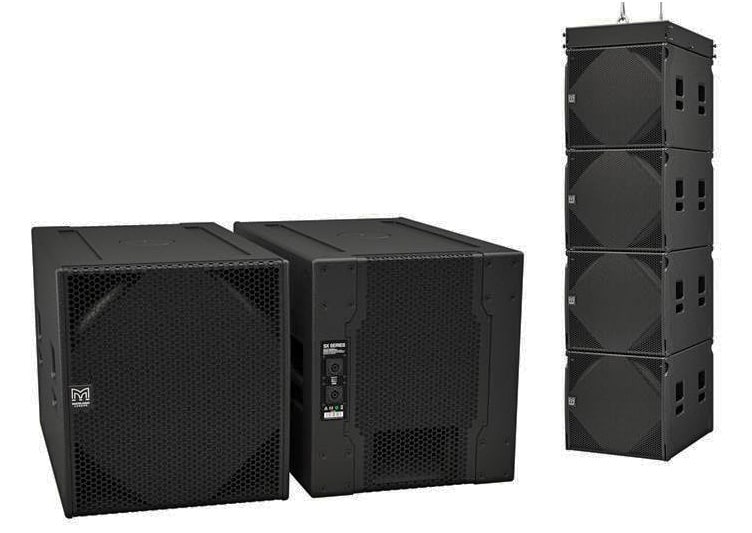 Martin Audio has confirmed that the previously announced SXCF118 and SXC115 compact cardioid subwoofers — designed to partner with the company’s WPS and WPM line arrays, respectively, and suited for live sound and fixed installations — are now shipping.

The SXCF118, a flyable version of the SXC118, has been engineered to match the WPS optimized line array system. The ground stack SXC115 adds low-frequency extension to the WPM.

The SXCF118 has an 18-in (460-mm) forward-facing driver and a 14-in (356-mm) rear-facing driver. Each is driven independently by separate amplifier channels and DSP. Additionally, each driver has its own chamber with optimized bass reflex porting. This arrangement is designed to produce a cardioid dispersion pattern that maximizes front radiation while reducing unwanted radiation behind the sub.

The SXC115 follows similar principles and contains a 15-in (380-mm) front-facing driver and 12-in (300-mm) rear-facing driver. Again, each is driven independently by separate amplifier channels and DSP. Each driver, similarly, has its own chamber with optimized bass reflex porting. In addition to accompanying WPM, it can also be used with a pole mount for Martin Audio point source loudspeakers.

Martin Audio MD Dom Harter states, “We are delighted to actually start shipping these innovative cardioid subwoofers to customers. Demand has been strong and our initial production run has all been allocated, but fresh order demand will start to ship from our UK factory from late February.”