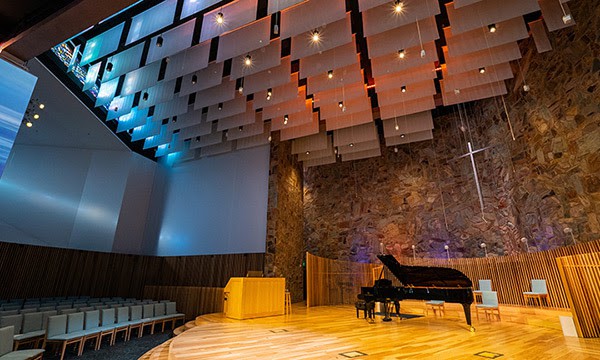 Valley Presbyterian Church in Paradise Valley, AZ, had a principal goal of accommodating both traditional and contemporary worship services in the same space. This led to a recent renovation of the 50-year-old sanctuary. The results saw acoustical and media systems consulting firm McKay Conant Hoover (MCH) implement a Constellation acoustic system from Meyer Sound to help provide the desired flexibility in the 600-seat venue.

“We have a very spacious campus, with our sanctuary for traditional worship at one end and a multi-purpose space where we held contemporary services at the other end,” explains Russ Henzel. Russ served for 15 years as the church’s volunteer AV technician. “Because of the distance between, we had a split congregation with little interaction between the two groups during social hour. Our goal was to bring the contemporary service into the sanctuary, with socializing in a common space, but we knew its reverberant acoustics would be a major problem.”

This agenda was in the brief handed to Jones Studio in Tempe, the project architects. They, in turn, enlisted the services of MCH (based in Scottsdale, AZ), who deployed a team comprised of Principal in Charge David Conant, who oversaw the project. They also included Taylor Blaine as project manager for acoustics. Randy Willis and the late Kyle Ridenour shared responsibilities for the media systems.

Early on, they realized the desire to significantly alter the acoustical characteristics for both amplified and unamplified music enhancement. Additionally, there was the need to instantly switch to a relatively dry acoustic for improved speech intelligibility. As a result, the approach recommended by MCH was electroacoustic enhancement.

“The church leaders liked the idea in principle, but like many who are unfamiliar with the technology, some were skeptical,” says Conant. “We recommended that they get in touch with Meyer Sound and visit one of the existing Constellation church systems. A delegation led by their minister of music, Jennifer Hamm, listened to Constellation at Laguna Presbyterian in Southern California, and I’m told Ms. Hamm was absolutely delighted with what she heard.”

To prepare for Constellation, MCH specified acoustical treatments that reduced the baseline mid-band RT60 from 1.75 seconds to less than 0.7 seconds. They also dropped the background noise level from NC 43 to NC 17, resulting in significantly improved speech intelligibility. To create the desired reverberation characteristics, the Constellation system utilizes 97 MM-4XP miniature surface mount loudspeakers and 11 Ashby-5C flush mount loudspeakers. They suspended them overhead and affixed them on the side walls, as well as around the choir area.

Meyer Sound’s Pierre Germain handled the system tuning. The results of his work were praised by the church’s technical staff. Constellation is designed to allow for a variety of acoustical environments. This includes a minimally transparent setting for a rock band to when the pastor is speaking. There are also longer settings enabled for sonic immersion by adding natural sustain and decay to the music. Although a full choir is not yet permitted because of the pandemic, Constellation has enhanced vocal and instrumental soloists performing in classical styles as well as the church’s distanced contemporary band.

In addition to music enhancement, Constellation in conjunction with acoustical treatments is stated to have improved speech intelligibility. With Constellation off or on a very short setting, the congregation hears only direct sound without destructive reflections.

Constellation can be easily operated by volunteers by selecting fixed presets from a touchscreen. However, the system architecture also allows custom tweaking of parameters. This capability was put to good use when the renowned early music vocal ensemble Helios came to the church to record a concert in cooperation with Central Sound at Arizona PBS. Two special presets were programmed for the occasion, with the ensemble auditioning both prior to recording. According to Helios tenor Kenny Miller, who is also the group’s executive director, results exceeded expectations.

“We were incredibly impressed with the acoustics and the aural flexibility in what is normally a space not suitable for early music,” concludes Miller. “We have performed in another space in the valley using this type of system from another maker, and it is not even a close comparison.”