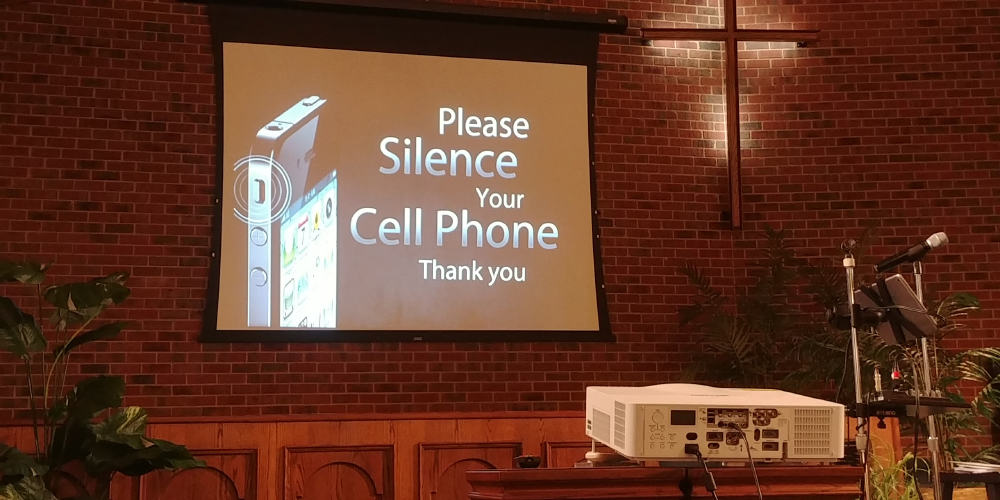 Would a video projector or LED wall be the best addition to your worship service? As with many other things, there is no universal, easy answer, since each church has unique needs and resources. However, there are ways to identify which solution would work best for you.

Because many church lighting systems are brighter than they used to be, sanctuary stages are brighter, making it hard for projection screens to be effective. The problem is, a projector shines light onto a projection surface, be it a screen, a curtain, or a bare wall, and you then observe the light as it’s reflected off of that surface. Consequently, light intensity is lost along the way.

In contrast, LED walls are made up of LED pixels. These pixels emit light on their own, rather than reflecting light emitted from another source. And because each LED screen has many, many pixels, each emitting light, the LED wall can offset the intensity of the lighting onstage much more easily than a projector.

LED walls also typically have more flexibility in terms of size and design. You can use one screen, or link many screens, limited only by space and budget. There are even flexible LED walls available that can curve and bend around a space, adding more of a feeling of dimension, or the ability for people to see an image as they move throughout a room.

Considering these challenges, it would seem that projectors as a option would be obsolete. Not so. Just as LED lights haven’t completely replaced standard lights, LED walls haven’t replaced projectors, and in fact newer projectors have made strides to overcome some of the challenges. Plus, projectors may be the best option for your budget, or for the use you have in mind.

First, while an LED wall can be as big as you want it to be, if your stage space is limited, or it’s multi-purpose space, it may make more sense to have a retractable or removable screen. Perhaps the pastor is doing a reading. Before the reading, the screen would be brought down and the words of the passage would be projected on the screen during the reading, so congregants can read along, or so they can be pointed to for discussion. After the reading, the screen retracts and space is made for the worship band to play.

Similarly, if there are seats close to the stage or screen, projectors tend to offer a better, more natural image. As noted in our downloadable Learning Series piece, “The Truth of LED Walls,” the proximity of viewers needs to be carefully considered for video walls to avoid the pixelization of the image. The closer the individual LEDs are to each other, the better the image looks to audiences who are close to the panel. The further LEDs are spread out, the better it looks to audiences farther away.

Thus, as the size of a worship space increases, LED walls would offer more benefit. To cover the same space, one would have to use multiple projectors whose images would blend at the edge to project the desired image. However, in a small space, perhaps for a smaller house of worship, using one projector, or a few of them, perhaps with a retractable screen, would be a better solution.

If you’ve read another Learning Series feature, “How Heavy is Your Roof?“, you know that rigging things properly in your sanctuary is a major safety concern. Lights and speakers are hanging overheard, supported by your ceiling. If your worship space is historic, fragile, or ornate, you don’t want to damage it, and you may not want to damage the beauty of it by making sure it can support the weight of an LED wall. This would again point toward a much lighter, perhaps removable option, namely a screen, as a better choice.

However, keep this in mind: You still have to mount the projector. While a projector won’t weigh as much as a video wall, you still have to have a clear line between the projector and the screen. Make sure to keep all cabling, plugs, other lights, and other obstacles out of the way at all times or the effectiveness is ruined not just for a few people, but for everybody.

There are cost considerations to be taken into account, which involve maintenance and expected product life, and because there are a variety of levels of quality of both LED screens and projectors on the market, you can still find examples of both types of product to fit your budget, that should last for some time. For example, newer laser projectors can work around many of the limitations of bulb projectors, projecting an image across a greater space with little to no loss of clarity or intensity, but those would cost more. And LED walls may cost more initially, but would need little maintenance over time.

However, one key difference may help you make a decision: Catastrophic failure. Imagine that during your Sunday service your standard projector bulb burned out, and you didn’t have a spare on hand. While your service could continue, your ability to project anything would be either totally negated or severely hampered because projectors are a one-point failure device. If one key thing in a projector fails (such as the bulb, the lens, or the power source), the entire thing stops working. If you had an LED wall and one LED burned out, it would hardly be noticeable. If one screen burned out but others worked, you could adapt. In fact, many churches using LED walls have spare screens on-hand in case one does burn out. Regardless of which option you choose, it would seem the best bet is to plan ahead and be ready to adapt.