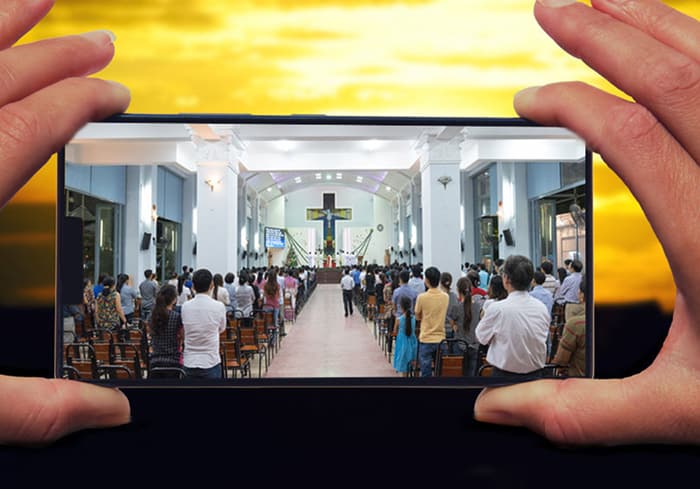 Streaming church services online is no longer new. For most churches, streaming was an imperative way to stay connected with their members during the pandemic, and once the technology was in place, they continued doing it to connect with members who might have issues keeping them from attending church in-person, and to reach new members through platforms such as YouTube. One concern for any programming, whether it’s viewed on a streaming service or on television, is closed captioning. While traditionally seen as a means of allowing the deaf and hard of hearing to understand the audio content of a program, recent studies show that even viewers who don’t have hearing problems regularly watch their content with the captions on.

In our recent article, “Aligning Your House of Worship With Gen Z,” we discussed how Generation Z, people aged 25 and younger, are now the driving force behind technology and, in many ways, the economy. To keep your church growing, you have to be able to reach more people, particularly young people. This has always been true, but with Gen Z the rules are different. While Millennials had access to digital media and the internet for most of their lives, Gen Z is the first generation of “Digital Natives,” who grew up with the internet and have used texting and social media to communicate for their entire lives. If you want to attract their attention, a digital presence isn’t just optional, it’s vital. Beth Warren, Senior Vice President for Creative Realities, helped put this in perspective:

“They move freely between online and offline. They do everything in both places, depending on what’s in front of them. If you’re not online, with an active web page and social media presence, they’re not likely to get engaged.”

Note that Warren mentions social media. Hopefully, you’re already using social media to communicate with your congregation during the week. To retain current members and reach new members, particularly younger people, you should stream your services on a platform such as YouTube, where they can be found and links can be shared. You should also share content on your church’s social media feeds. Ideally, to reach Gen Z, you’d be sharing chunks of what Warren calls “snackable content” – short bursts of easily processed information like tweets, memes, and short videos about 8 seconds long.

Length is key. Members of Gen Z process information very quickly, so they’re far more likely to watch and share several short videos that had key points from Sunday’s sermon than they are to watch a 15 minute video of the entire thing. You could then reach a wider audience by not only posting the clips on your church’s social media account, but tagging the account of the pastor who delivered the sermon. However, there’s another factor to keep in mind: captions.

Not just for the hard of hearing

Recent studies have shown that while Gen Z prefers short video clips to stay informed and learn new things, they will read, provided what they’re reading is short and relevant to them. At the same time, they prefer reading what’s being said in a video in the form of closed captions instead of listening to it. This has proven to be true with Millennials and even some members of Generation X. While some will watch movies, video clips, and streamed content with the sound on and others will turn the sound off, the fact remains that a large percentage prefer having captions on. Why? Reasons vary. One reason could be “double screening” – the tendency to watch two things at once, such as glancing at one’s phone or tablet while also watching something else on tv or a computer. Another reason could be difficulty understanding accents, or poor/variable audio quality.

If you don’t think this is an issue that affects your church, think again. Look at the social media feed for your church or even yourself. Or, just go to a website and glance at some of the ads that may appear. Chances are if you keep scrolling, you’ll see something targeted at Gen Z – perhaps a short video with household tips or easy crafts. I saw one recently that featured roughly a dozen household cleaning chores that could be performed with items like lemons, potatoes, or vinegar, not chemicals. That video, and others like it, automatically played with the sound off and captions on. Your clips don’t have to default to playing that way, but you should make sure that all of your content – from your streaming service to your television production to any clips you might share on social media, all have captions available. Thankfully this is easy to do. There are various software products that can provide captions for you, and multiple free platforms such as Google Meet, Zoom, and Facebook will also provide you captions, some of them also translating the captions in up to 109 languages!

Of course captions are only effective if they’re accurate. This is a significant and common issue. To see for yourself, turn on your local news and turn the captions on. You could also try this with a live sporting event, but the key is to put on something that’s broadcast live. Chances are good that at some point, there will be flaws in the captions. It could be something minor like a misspelling, or it could be something more significant, like not captioning all of what was said or, worse yet, captions that are so inaccurate they change the meaning of what was said. Author, consultant, and speaker Meryl Evans, LinkedIn’s Top Disability Advocate for 2022, cited some disturbing facts from a study:

“Consumer Reports partnered with Northeastern University and Pomona College to conduct an automatic captions study. And they used 850 TED Talks. https://bit.ly/3pKGUAr. These are better than the average video. They’re professionally recorded and feature one speaker in a quiet setting. Moreover, TED Conferences speakers tend to have a slower speaking pace with lots of pauses than the average speaker. The study looked at seven automatic transcription products.

As an example, Evans points out a miscaptioned line from the iconic scene in the film “Taxi Driver.” In the scene, the actual line is “Are you talking to me?,” which is repeated as “You talkin’ to me?” However, the captions read, “I’m talking to me,” which not only changes the meaning, it makes no sense. Utter caption fail.

Part of the problem, implied earlier, is the risk of broadcasting anything live. When something is totally live, anything can happen, from flubbing lines to tripping onstage, and because you’re live, everyone is going to see what went wrong. That includes captioning mistakes. However, when you’re posting something on social media, or recording a service or event to stream or broadcast later, you can check everything for accuracy and make edits as needed. Do you really want the captioned clip of your Bible study to read “This week we’re studying the gas pill of Luke?” No, you don’t. As Evans says:

“There is absolutely no excuse for recordings to have bad captions. Live — I get it. But not recordings.”

Bottom line: If you want to engage with a broader and younger audience to maintain and build your church community, you’re going to have to step up your social media and streaming game, and that includes providing accurate captions. The good news is, it’s easy to do, with little to no cost to your church, and a lot of reward.