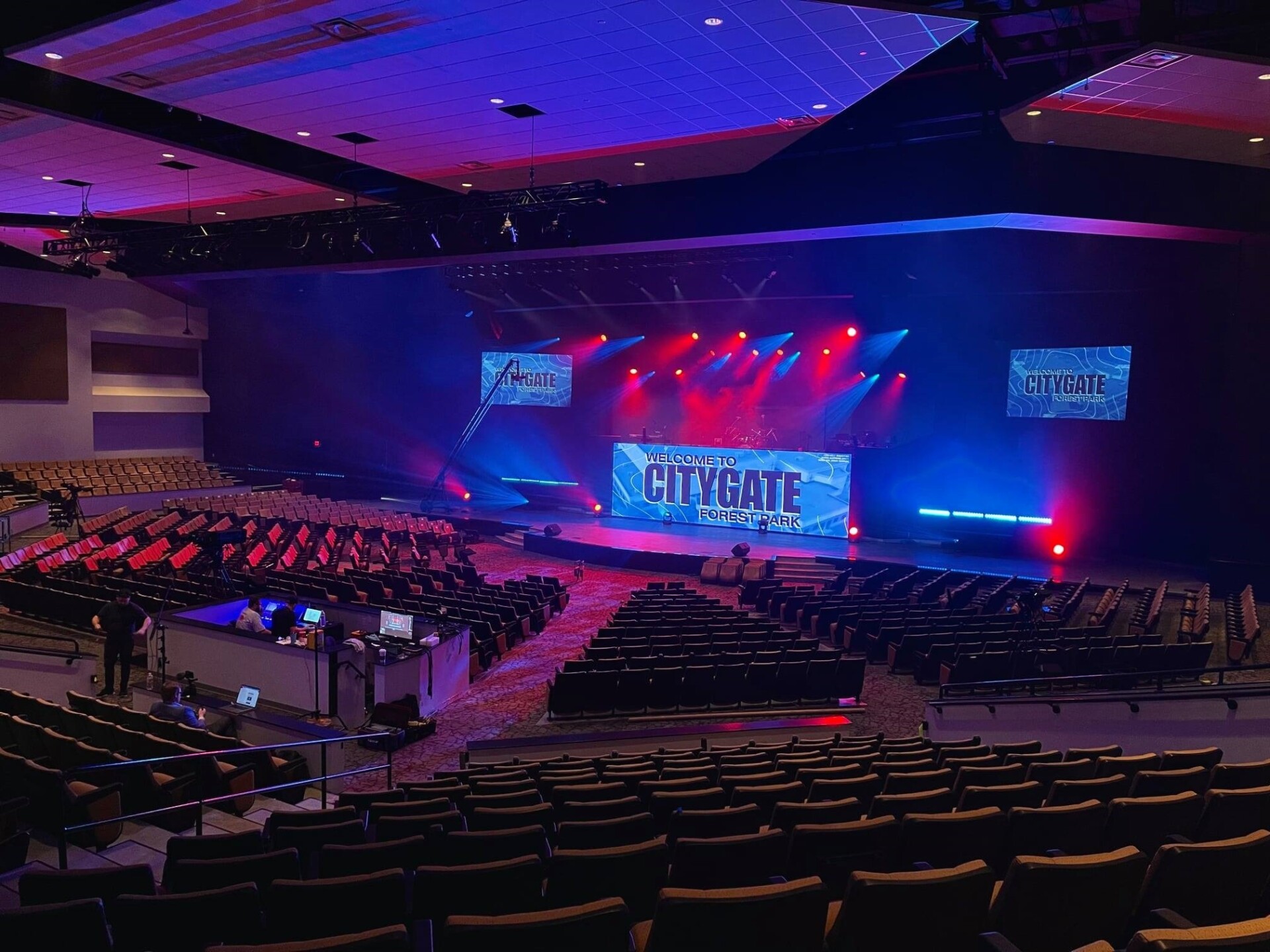 In the tri-state area where Indiana, Kentucky and Ohio meet, just north of Cincinnati, lies Citygate Church’s new campus, Forest Park. The church, which originated in Cincinnati and was once mobile, has grown from a small congregation into a thriving, multi-site ministry that enhances services for live and broadcast audiences using customizable lighting from Elation Professional specified and installed by integration company S&L Integrated Systems.

Dream board vision
Citygate is a multi-ethnic, outreach-driven church with a vision to positively impact the community and share the word in a creative and dynamic way. “Pastors Eric and Kim Petree have always had a vision to become a multiple campus church – one church, multiple locations,” says Dustan White, Production Director at Citygate Church. “We know that our success and our blessings come from how we impact other people’s lives, and the opening of the Forest Park campus has opened the door to an even broader community.” As Citygate operates an existing campus in Lebanon, Ohio, further north, the Forest Park
campus gives the church a broader reach into the Cincinnati area. The ministry also administers outreach in downtown Dayton, as well as downtown Cincinnati.

Asking for a miracle
Although expansion into a new community was a longtime vision of the church, an expensive new build wasn’t necessarily on the agenda. The Forest Park property – an existing church space that had become available under auction in early 2021 – was an opportunity that the church couldn’t pass up. Nathan Tomberlin, an account executive at S&L Integrated Systems (slintegratedsystems.com), who has known Dustan White for 15 years, tells the story from his perspective: “Early in the year, I got a phone call from Dustan enquiring about lighting for a ‘church’ but at the time, he couldn’t reveal the name. I was glad to
help but was naturally curious. Then in early July, he called again to reveal the Forest Park project, which I was happy to hear about. But then came the bombshell – he asked if we could make the install happen before the beginning of October and here we were in July with major supply issues! He was asking for a miracle but I told him I’d do whatever I can.”

Citygate didn’t actually close on the Forest Park building until late July so time was even tighter. Tomberlin, however, sprang into action, conducting on-site visits to survey the site and producing a materials list based on a modest budget. The brief from White was for high-quality lighting that was LED-based for cost savings, easier maintenance, and durability.

Lighting foundation
There were predominately two areas to light in the 1500-capacity sanctuary – a raised band riser that supports a full band and a larger lower deck. Tomberlin put together a cohesive 3-point focus package that served as a foundation design with key lighting and rear wash, a “phase one” package that he says the church can add to over time.

Tomberlin uses two key luminaires to realize the design: the compact Fuze SFX™, a multi-purpose LED spot and effects fixture; and the WW Profile HP™, a high-powered LED warm white ellipsoidal. “The catwalk angles stage right and stage left are at about 45 degrees so it was perfect for key and fill from the WW Profiles,” Tomberlin explains. “We also have them on a 50 ft. stick of truss over FOH for the downstage and altar, and additional fixtures on another truss at proscenium over the altar area for front wash for the band riser. The SFX are on the ground and upstage left, center, and right.” Elation Platinum Wash ZFX moving head wash fixtures were transferred from Citygate’s Lebanon campus to supplement the SFX and WW Profiles.

A standard for production
S&L Integrated designed, supplied, and installed the lighting system along with motors, rigging, structure, audio, and comm systems. Tomberlin also designed a patching system for DMX. “Forest Park has given us an opportunity to set a standard for production for our campuses while establishing the look and feel that we want. It’s a system we can translate from one campus to another as we grow,” he said, noting that the goal next year is to put in the same broadcast and lighting setup in the Lebanon campus.

Dedication services at Citygate’s new Forest Park location took place on October 17th with a new lighting package that had them ready for the Christmas season. Manufacturers’ rep firm and Elation dealer Freed Sales worked with S&L Integrated to secure the Elation products in time and Nathan and his team at S&L worked through the night the night before the dedication to make sure it all came together in time.

“That we were able to get all the lighting fixtures we needed and do this in such a short time frame was huge,” he concludes. “It has been an honor to work with Citygate on their new campus. The church has a great story behind this project, and we are so thankful to have been a part of their journey!”

To see S&L Integrated’s video of the Citygate Church project, go to https://slintegrated.com/customers/citygate-church.