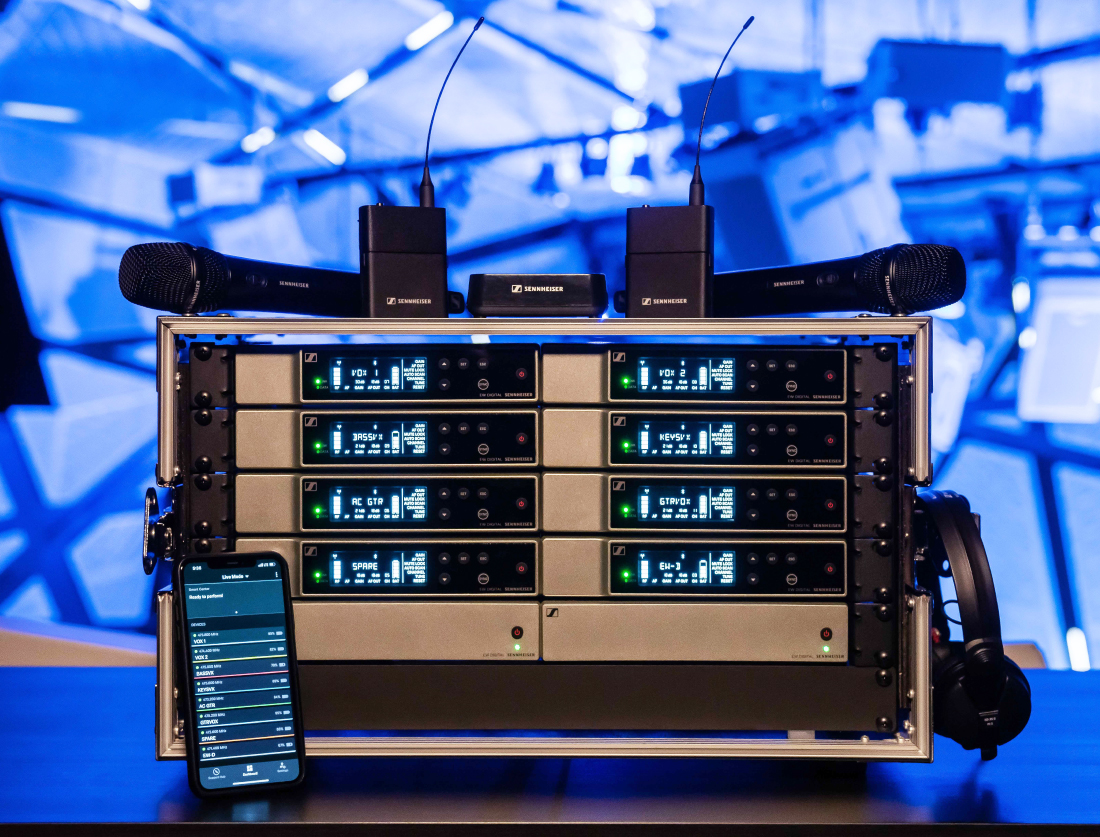 Sennheiser has announced the debut of Evolution Wireless Digital, a series of UHF/1G8 wireless microphone systems with an app-based workflow designed to guide users through setup in simple steps.

“We talked with dozens of bands prior to the development of Evolution Wireless Digital,” explains Oliver Schmitz, product manager for Evolution Wireless Digital. “Many band members are in fact multitasking, driving the gig bus, setting the wireless up, performing on stage, doing the accounting, the marketing, you name it. They do not want to become experts at RF, they do not want to scan a venue for open frequencies, they do not want to battle with settings. They just want something that works right away, so all they have to do is switch on and go.”

The setup process via the app is designed to automatically create reliable wireless connections. Users can name their own channels and have access to all system settings. Bluetooth Low Energy allows for remote access to the system and is intended to make sync’ing with the receiver more convenient. The app also includes tutorial videos presented by Benny Franke, developer of the software, to help users get started while providing operating instruction.

Evolution Wireless Digital (EW-D) transmitters are stated to have an input dynamic range of 134 dB, designed to eliminate the need for a sensitivity setting. Receivers have been set to a gain value covering most applications, which users can change if desired, with a new user interface intended to simplify the process.

Further, the app will scan the environment to find open frequencies. In addition, the EW-D platform utilizes tech from the company’s premium Digital 6000 and Digital 9000 series, so the systems do not generate any significant intermodulation products, which in turn makes for more room in a given frequency window. The app can also set the wireless links at 600 kHz intervals without any frequency calculation and is therefore able to fit in more frequencies

EW-D has stated latency of 1.9 milliseconds and a transmitter battery life of up to 12 hours with the BA 70 rechargeable battery pack. A bandwidth of 56 MHz with up to 90 channels per band makes it easier to find space even in crowded of RF environment. As a digital system, EW-D does not use a compander with the associated noise floor and artifacts.

Also available are newly designed antennas, antenna splitters, boosters, and charging sets. And, EW-D handheld transmitters couple with any Sennheiser or Neumann wireless capsule, including the Neumann KK 205 and KK 204, the new Sennheiser MM 435 and MM 445, as well as the Digital 9000 capsules.

“Whether you are a singer/songwriter doing your first gigs and want to use your own microphone system, or a band tech who has mics, IEMs and a mixer in one convenient rack and uses a mixing app – Evolution Wireless Digital will perfectly fit into your preferred usage scenario, no matter whether you are planning an in-person or a streamed live gig,” concludes Schmitz.

Evolution Wireless Digital is available now with a choice of handheld, instrument, lavalier, headmic, combo and base sets.