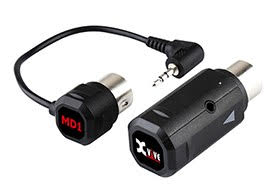 Xvive Audio has announced the expansion of its product range with the MD1. It’s a wireless system for MIDI instruments and controllers that uses 2.4 GHz Bluetooth 5 and Bluetooth Low Energy (BLE) technology to transmit MIDI messages between 5-pin MIDI devices and BLE-enabled Mac computers, Mac laptops, iPads and iPhones. If two MD1 units are used, the system can also transmit MIDI between two non-Bluetooth MIDI devices.

The compact MD1 system makes it possible to connect a non-Bluetooth MIDI keyboard or controller to an iPhone, iPad or Mac computer. The MD1 is also compatible with a variety of MIDI gear. This includes keyboards and synthesizers, MIDI controllers and pads, electronic drum sets and drum machines, foot controllers, profiling guitar amplifiers, digital mixing consoles, effect rack units and even some effect pedals.

MD1 doesn’t require a battery or power supply. It gets its power from whatever MIDI OUT port it’s connected to. The system is designed to connect quickly. Latency is stated to be as low as 3 milliseconds when transmitting between two MD1 systems. The wireless range is 20 meters (65 feet) without obstructions.

The MD1 Wireless MIDI System is available now from Xvive dealers and online retailers worldwide at a price of $49.99 USD. Go here for more specifics.