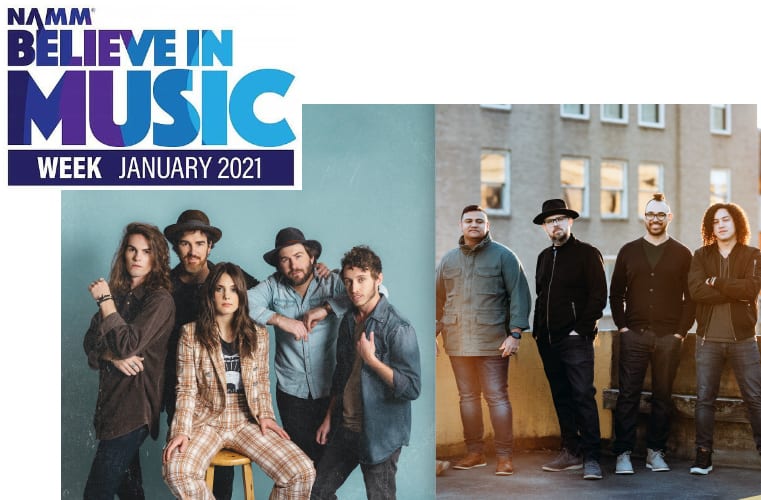 Yamaha is combining a message of faith through music with the setting of a prayer service for its annual Night of Worship event next Thursday, January 21, 2021 during the upcoming NAMM Believe in Music Week.

For the past 11 years, the Yamaha Night of Worship concert has presented live performances by worship music artists. The 2021 version will deliver the same experience but in an online, interactive and personal format.

The hour-long session will feature music performances by We The Kingdom, named the 2020 New Artist of the Year by the Gospel Music Association, as well as the Jason Lovins Band. The bands will also share their experiences using music to inspire, and Yamaha is offering a live chat feature allowing viewers to interact with the artists and special guests during the livestream.

“This year’s event will deliver the best of contemporary worship music artistry, featuring We The Kingdom, an exciting newcomer on the music scene, and Jason Lovins, a beloved recording and touring artist with an incredibly inspirational story,” says nine-time Emmy award-winning producer Chris Gero, chief artist relations executive, Yamaha Artist Relations Group/Yamaha Entertainment Group. “The online and interactive format will allow the viewers to get up close and personal with these artists and establish a deeper connection with their messages of faith through music.”

Jason Lovins, the leader and founder of The Jason Lovins Band, has turned his life’s beginnings into a stirring testimony, even though the negativity of it could have turned him towards seclusion, bitterness or to be silent altogether. Jason’s mother was raped when she was 15 years old, and Jason is the baby she carried to full-term after the incident. From those beginnings, he was raised in a strong family environment by his mother and grandparents who inspired and nurtured his love for music. It was during high school that Jason got into Contemporary Christian music, and it changed his life. He and his band have since built a successful recording and touring career, and a faithful following worldwide.

We The Kingdom is a multi-generational family of musicians, including esteemed producers and songwriters Ed Cash (Chris Tomlin, NEEDTOBREATHE, Bethel Music, Crowder), Scott Cash, Franni Rae Cash, Martin Cash and Andrew Bergthold. The band organically formed at a Young Life camp in Georgia. Now, as one of the top 20 breakout artists across all genres in 2020, the group’s first single, “Holy Water,” reigned at the top of the Christian radio charts for eight weeks, earning We The Kingdom four Dove nominations and a win for “New Artist of the Year.”

The performances by Jason Lovins Band and We The Kingdom will be pre-recorded at Ocean Way Nashville using a Yamaha RIVAGE PM10 digital mixing console, NEXO loudspeaker systems and a host of Yamaha musical instruments.

More information about Night of Worship will also be listed on the Artist TV channel where people can add the event to their schedules and set reminders to watch when it airs.