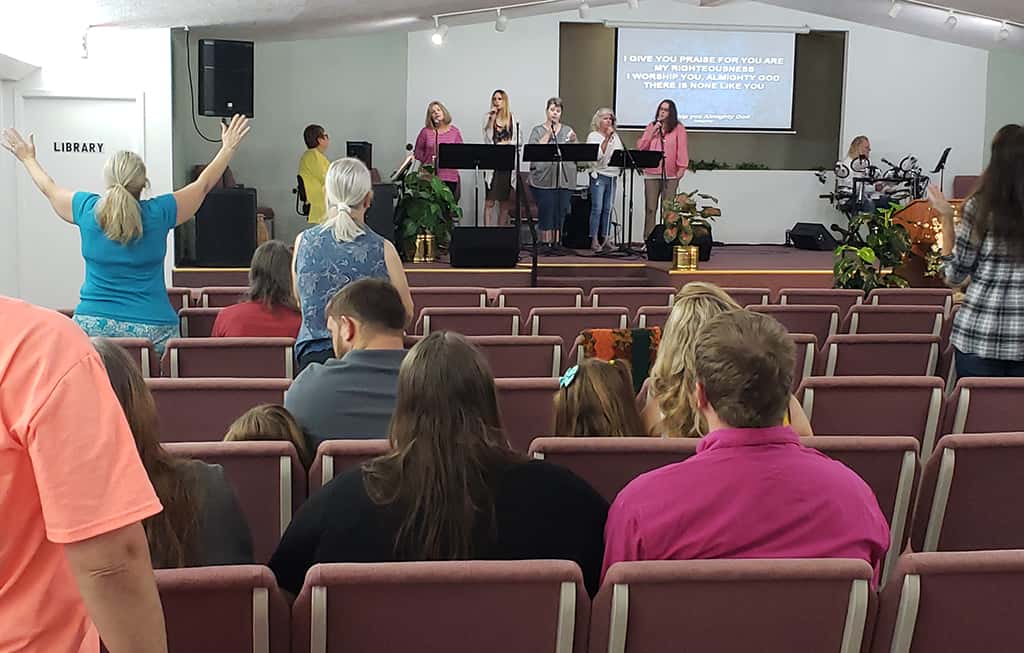 COLMESNEIL, Texas – Churches often conclude that the only solution to improving its streaming capabilities is making a big and complicated investment. As Agape Church discovered — that is not always the case.

The church (pronounced Ah-gah-pay) is located in eastern Texas, about 120 miles northeast of Houston. Streaming began a few months ago once everything shut down in response to COVID-19 restrictions. “We missed the first Sunday (at the beginning of the shutdown) and then after that we started streaming using with my cellphone,” said Agape’s associate pastor, Thom Shields.

From there, the church quickly shifted from recording with the pastor’s cellphone, to capturing the services with a JVC camera. New problems swiftly arose, though, beginning with buffering issues.

At the 31-year-old rural church, the pastor had originally looked to run its streaming through DSL. “That was pretty slow, and we had buffering issues,” explained Shields. To try to limit buffering, the pastor began using his own cellphone’s personal hotspot as a solution. “It allows for a faster speed,” but without a booster, it still was not enough to avoid buffering.

Plus, there were other issues using the cellphone’s personal hotspot. “When I’d get a call, it would cut off the livestream,” noted Shields.

Seeking an ideal solution, Shields reached out to eight companies. “SureCall was the only one who reached back to me,” noted Shields. After running the SpeedTest app and the Android LTE Discovery app from his phone to measure the dB signal strength, along with download and upload speeds, he passed that information to SureCall.

With that information, the SureCall Fusion5s cell signal booster was deemed an ideal match for Agape’s needs. Prior to using the signal booster, the church “did not have a very strong signal inside. We walked them through to recommend the right booster,” said Frankie Smith, vice president of sales of SureCall. From that conversation, “We could ensure that (Agape) had the right gear for the area they wanted to cover. Then it became a more intuitive and easier process.”

Suited for large home or office spaces, up to 6,000 square feet, the Fusion5s solution boosts 3G and 4G LTE signals. With its addition, it quickly resolved Agape’s issues of buffering for those watching a service from home.

With the Fusion5s, “it takes the signal outside from the carriers, and captures the signal. It brings that signal inside the walls, and boosts it throughout the church,” said Smith.

“(Shields) was able to upload and stream without it buffering and glitching. The goal was to have it not break up while streaming,” he said. “When you are on YouTube and all it is does is spin, it can be frustrating.”

Even though the church recently returned to hosting in-person services, Shields recognizes the need to continue streaming its services. “Our YouTube (views) are picking up,” as are the church’s views on Facebook, he added. These recent gains were realized even though the small church has yet to create its own website.

By Agape recently installing the Fusion5s, the change has been an immediate benefit to Shields’ congregation. Since the move, “I haven’t had any complaints about buffering, which I had in the past,” he noted.

Courtesy of the booster, the structure did not negatively impact the signal. It allowed a signal that before the booster had run at less than one megabit per second, and increased it to almost 26 Mbps.

“When you have a building that has a metal roof, in a rural community, and you are using a cellular connection for the internet, the booster is the best solution for us,” explained Shields.

The improvement of the Agape’s capabilities with its streaming have been so significant, that the associate pastor is considering upgrading its video capabilities in the near future.

“I’m looking at where we will (eventually) have two or more cameras with a switcher,” said Shields. With the Fusion5s, it can work with additional pieces of equipment, while keeping “a stable signal. And I will still plan on using the SureCall with my cellphone.”

Upon deciding that the Fusion5s will serve as the best investment to improve Agape’s streaming capabilities, the installation proved to be incredibly simple and short.

According to Smith, “As a rule of thumb, it can take up to an hour, with running the cable outside.”

Once Shields figured out the right connections for the Fusion5s, “It only took five minutes. We did a ‘soft’ install, ran sound, but didn’t check the cables.” Upon figuring out the inputs to the booster, “Then we were fine. In all, it took about 25 minutes to get it right in.”

Other items included in the install at the Texas church included an antenna on the roof, and cabling between the booster and antenna, noted Smith.

As a result of such a minimally invasive install, the church did not have any delayed or cancelled services.

Booster As Solution Scalable to Churches of All Sizes

While the Fusion5s was an ideal match for Agape, Smith cited the SureCall line offers solutions benefitting any church.

“Houses of worship come in all shapes and sizes. We can help megachurches, who work with a professional installer or have an IT team,” noted Smith. “Boosters like the Fusion5s are a scalable solution, beginning with the smaller churches, from DIY up to a professional installation, and everything in between.”

Upon getting up and running, Shields appreciated the assistance SureCall provided throughout the process. “We had a conference call with an install engineer. I was told that if you still have any difficulties, to give them a call. I was appreciative to have that sort of backing, for them ready to help me, if needed,” he said.

From the initial phone call, Smith indicated SureCall outlined best practices, along with things to look out for, and a user manual detailing directions on setup. “He didn’t need any troubleshooting help, and we didn’t hear from him until he was done installing it.”

Shields explained being extremely satisfied with the results. Among the goals of the install, he said, “was to have a strong signal. And to have an upload speed that is fast enough to not have it stumble.” Even better, Shields added, was “having (the speed increase so dramatically). That was the goal and it was accomplished 100 percent. I was excited about it.”

How to Start Live Streaming

Over the last few years live streaming church services and special events has become easier than ever and pretty much expected from followers. I get weekly calls from houses of worship that still have issues with broadcasting, mostly because they are missing a single...