Talking with sound technicians and worship leaders, I often hear the complaint that from week to week, the quality of Sunday morning varies. I’ve determined that some of this is from training, such as when there’s a problem and the tech doesn’t know how to fix it. Some of it’s skill; certain folks simply have a better ear and command of the equipment than others.

On the same hand, the skill level of the musicians may also vary. I’ve found that with inexperienced musicians, the level at which they’re playing can fluctuate greatly. I attribute this primarily to a lack of confidence. When they know the song they “bang” it out, but when they’re unsure, they hold back.

Today I’d like to focus on another contributor to the problem of inconsistency: equipment status and organization. 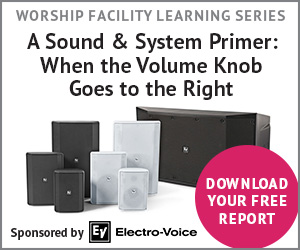 It’s 5 minutes before the start of the service and you’re sweating bullets as you have to set up 4 additional players that the worship leader never told you in advance were “joining in with the band.” You’re thinking, “Great, no time for sound check, much less a simple line check!”

You dutifully plug in the mics and direct boxes, and position them as best you can. You then high-tail it to the sound booth for the start of the service. Thankfully you make it with enough time to guess at the input gain and monitor levels, say a quick prayer, and un-mute those channels for the opening song.

Then it happens: that infamous bzzzzzzzzzzzzz that makes everyone’s hair stand on end! You throw on your headphones and determine it’s the direct box that the bass player is plugged into. This is when you’re forced to make a split decision as to what to do.

You decide rather than race to the stage to see if the line chord from the bass is bad, if the ground lift on the direct box needs to be switched, or if your mic chord is bad, you’ll just mute the bass player’s channel and work on the mix. Plus you’re thinking that at least his bass rig is working and that output will spill into the house.

So, how many times has this, or something like it, happened to you? Was it preventable? Of course it was! As I always say, it’s the simple stuff that kills us. So how could all this have been prevented?

Lets look at the 5 things that should have been done before the sweat and bzzzzzzzz fest.

On a regular basis check all your cables and cords. Also, organize cables in a logical manner. My approach is to hang them on a peg board sorted by length. This way if we encounter a bad cable, we know exactly where to go to grab a replacement.

It goes without saying that you should have at least two spare cables for each variety of cable you are using. For example, there should be an extra 1/4-inch to 1/4-inch, XLR male to female, 1/8-inch to RCA—whatever cables and adaptors you use should have spares, and know where they are!

Make sure that you know exactly how many inputs and what type of inputs that you will have from the band on Sunday morning and have them set up and tested ahead of time.

Ask the worship leader (and ask often) if there’s anything else you need to know. Even for those of us who prepare ahead of time, surprises can happen. On a recent Sunday, I had all 6 of our vocal handheld microphones in use, and 10 minutes before the service I noticed on the worship order that a missions report was also scheduled.

Right away flags went up as I figured the update was not going to be from one of the pastors (they all wear headset mics), and thus an additional handheld mic would be needed. I quickly found one of the worship team singers and coordinated a “hand-off” of his mic to the person doing the missions report, and he in turn handed the mic back to the singer in time for the next musical number.

At my church, we typically as a group (pastors, worship leaders and the tech team) communicate very effectively;  this just slipped through the cracks, and thankfully I have a habit of running down the worship order and visualizing the transitions before the service starts.

The bottom line is err on over-communicating and asking questions!

Normally the above scenario would not have been an issue as we always keep a handheld wireless on a stand in front of the stage, “just in case.” But as I mentioned, we had all 6 handheld mics being used by the worship team. In retrospect, if I’d been properly planning ahead, I would have placed a wired handheld in front of the stage.

Always have some sort of plan B in place if something goes wrong and communicate that plan to everyone onstage ahead of time.

Once every 3 to 6 months the entire tech team should get together to go through all of the equipment. This will help determine if equipment is missing, in need of repair or in need of replacement.

It will also give the tech team the opportunity to provide input on additional equipment that is needed as well as organize the accessories (cables, stands, etc.) that you have. And by the way, this process is a lot more fun if you order pizza and sodas for the team!