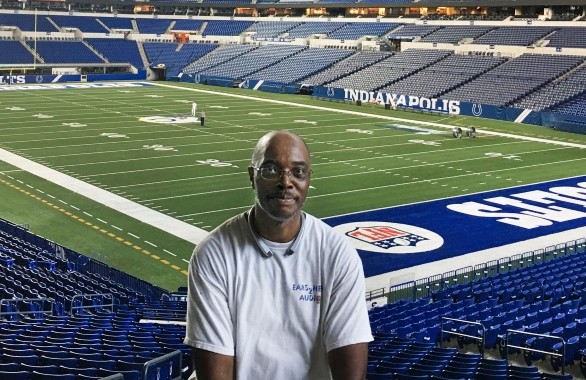 I first met Tony Hill while working with Chuck Colson’s Prison Fellowship in the late 1990s. Not a typical “sound tech,” he displayed a passion for the craft that seemed to fall second only to his passion for people. A minister in every sense of the word, with technical prowess to match.

Now the owner of AV systems firm Ears 2 Hear Audio in Indianapolis, he’s never been content with his skill level, possessing a desire to continuously improve and move forward that’s enabled him to branch out far beyond mixing Sunday morning worship services.

Originally, Hill entered the production world from the other side of the fence as a musician. From his high school marching and concert bands to years as a sax player, he developed his ears, always in search of better sound, within a bigger picture of a pursuit for quality in every endeavor.

In the 1970s, Hill turned to recording as the next step in his development, purchasing an open reel 8-track tape recorder. “I went around offering to record bands for free,” he notes. “I wanted to be better at it and used them for practice. They couldn’t really complain about the quality since I wasn’t charging them. It gave me an opportunity to practice and sometimes they got something good for free in return.”

A bit later, his ministerial passions merged with his technical passions to serve within a local church. Like many other church techs who’ve found their place and calling, he began helping other ministries improve their events and services. And in that process of giving, he received even more in return.

“I was volunteering for the Billy Graham crusade in 1999, helping with the production team for the youth service,” he explains. “It was there I met Bill Thrasher, the reverend’s long-time front of house engineer. We became friends, and he became a mentor to me. To this day, I can call up Bill and pick his brain whenever I need some direction.”

The affiliation with the Graham crusade led Hill to Colson’s Prison Fellowship, with Capital AV of Washington D.C. managing the production for PF’s Starting Line program, taking bands, singers, ministers, comedians and reformed ex-offenders inside the walls to encourage the inmates. Capital AV recruited sound techs from across the country for these events, with Hill proving a natural fit in that role.

“I had kept my day job (serving as a postal worker) and was working with PF on the weekends,” he says. “By mid-2000, there was just too much going on and I had to make a choice. I told my wife I felt like I should leave the post office and go full-time with PF. She not only agreed, she told me that she felt like God told her that was coming a year earlier. So I made the change.”

Hill and I were working together in September 2001, partnering with the Graham organization for a crusade running parallel with PF throughout California during the same week. But on September 11, everything changed.

As a result, our October dates were cancelled about a week before we were supposed to fly out. It was a hard season for all of us. The shock of everything that happened during that time basically put everyone’s plans on hold and left everyone feeling uncertain as to what would happen next.

“Basically, this pastor calls out of the blue and wants me to put together his new systems,” Hill says, chuckling. “They had a small church and were building a larger one. We’d met before, but hadn’t talked for about a year, and here he was on the phone, saying they were about to break ground and asking me to do all of the AV.”

That opportunity not only locked in five years of consistent work, it enabled him to set things in motion that would eventually lead to opening a business of his own in the form of Ears2Hear Audio, based just outside of Indianapolis in Westfield, IN. And it also provided a platform to develop his skills in other areas, including acoustics, where he now holds a patent for a panel of his own design.

“Pastor Barnes and the church not only paid for the equipment and installation, they paid me for the design time and even helped me get the patent for the custom acoustic panel design,” Hill adds. “This is a church that really believes in being a blessing by blessing others. The relationship enabled me to build up my business by gaining additional training in sound and acoustics, in addition to working with their video systems.”

To this day, the passion for a higher standard continues to push him farther into system design for churches needing the ability to grow. He offers some specific thoughts on the state of the house of worship market and the current technologies he views as game-changers.

“The digital console has transformed everything,” Hill begins. “We don’t need tons of gear and miles of copper wire to have a great system anymore. I can set up a system with only a Cat-5/Cat-6 cable and a small digital console that can do it all. All of the processing needed for most church sound systems is supplied in something as basic as a Behringer X32.”

The latest wave of digital consoles also offers the opportunity for increased flexibility for growth and expansion, as well as improved performance with tighter budgets, he adds, pointing to in-ear monitoring, mobile device support, remote mixing, fully networked systems, and more. These advancements are, and will continue, enabling the local church to streamline processes, empower production abilities, and ultimately save money over the long run.

“With digital systems, I’m able to set up everything up and fine-tune it to the exact needs of a specific church,” he says. “If there’s an issue or an ‘overly helpful volunteer’ changing parameters, it can usually be fixed very quickly. In fact, most of the systems we’re installing give us the ability to log in remotely and make changes as needed. That’s a quick way to be a hero on a Sunday morning. It also saves time and money for simple changes without having to charge for a service call.”

Continuing our conversation, I asked Hill what he sees as the primary issue most churches face as a result of this technological development. “They’re hurting themselves by not bringing in qualified technicians early in the process,” he responds. “Just because there’s a member of the congregation who knows something about sound doesn’t make them qualified to design or install a system.

“Most volunteers aren’t prepared to face the code and legal challenges if there’s ever a problem,” he continues. “Further, many churches don’t understand the long-term commitment of investing in systems. It may be cheaper to do it yourself now, but what about a year from now?”

The changes have also altered the dynamic of tech staff and operators, he adds: “Digital consoles are computers. It’s that simple. I find that the younger folks, the ones who have grown up with cell phones and computers, are much easier to train on new systems. But the older folks tend to have a better ear for mixing and a stronger work ethic. It’s good to have both sides involved, as long as they remain aware that they need to perform as a team and work together.”

It’s just one insight in many that have been a long time in the making for Tony Hill, who after more than 40 years of work with audio, systems and music, remains on a never-ending quest to embrace technological changes and learn ever more. It’s a quest many involved with church tech and production share, an unflinching pursuit of excellence.